Lion President Carol lead our meeting today and asked Bob Line to do the song and  Pete to do the invocation.  We did salute the flag,  but this editor failed to note who lead us in doing so,  so they shall remain anonymous.

Dee announced our guests from the breakfast lions club, but, according to Dee, we should have locked up our women and children before a couple of them arrived.

The no fine went to Lion Daryl.

At Walts last cabinet meeting as district governor last weekend in Selma,  our club got an excellence award for Allen’s terms IN office. Also, at the pull tabs weigh in, our club surpassed everyone else.

Carol handed out raffle tickets for the Ensenada trip, $1.00 per ticket.

Dee announced that lion Pat Harrison went in for an angiogram last week and the Dr.  put him in the hospital for a  triple bypass surgery. He will be out for a couple months.  Prayers for his quick recovery.

Harley announced  flag day will be with 4 schools and passed around a signup sheet.

On Memorial Day weekend, the diabetes camp is as looking for help in cleaning up the camp and getting it ready for summer. Contact Walt of you think this would be a  cool thing to do.

Jeannie has flyers for the  wild hog chili run on April 12 this year. if you want to serve on the committee contact  Jeannie, who challenged our visiting breakfast lions club to make some chili for the event.

Janet announced that Layton Lions club  is celebrating its 80th anniversary, and April 5th at 10AM there will be a parade in downtown Layton to celebrate. 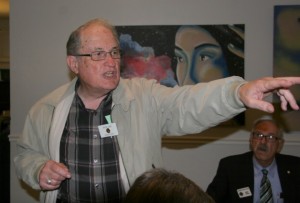 Craig is happy it is raining and that he just visited Mt. Whitney HS and he was impressed with the kids, how polite they were.

Melinda went to the district meeting in Selma, and she won 4 of the raffle prizes, she will donate some to the chili run and she was happy it’s raining.

Ruth was in a rut, and very happy it’s Friday, the weekend will undoubtedly get her out of the rut. .

Jeannie went to a trade club and she won $100 and she is donating it to the chili run.

Allen was happy for the awards he received at the cabinet meeting in Selma.

Being a banker, Ed was happy because all of his farmers are getting the rain. Happy last night at the Harley Owners Group meeting he talked up the chili run, plus he won the 50/50 raffle and donated $20 of it to the chili run.

Melinda, one more happy buck because there was a board meeting after the regular meeting today and she can now  turn her badge right side up.

Vickie was happy again for Tony Loliva for helping her at the sign in table, and happy that she was not going to Arizona and baseball spring training because of the weather. Actually she was happy that she found out about the weather before she got there and went to all the trouble to find that games had been canceled

Dee fined lion Allen because of his pink  “girly ball” from their golf game, they asked him to lose it but he seemed to be able to loose every other one except for that one. Plus,  Justin had to leave the last two holes, and after he left they played good. 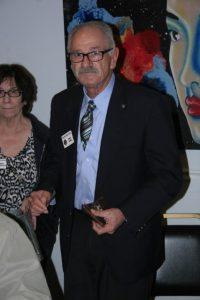 Lion Allen pays up for fines levied against him by Dee, Pete and Janet.

Our visiting Breakfast Lions Club announced that they have three events coming up, the  Irish Fest on March 15th at the Rawhide stadium, on April 4 they have the Forkum Mackey golf tournament, and May 17 will be the  downtown car show.  Check out the Facebook page and their website (http://www.visaliabreakfastlions.org)  for complete details. .

Pete and Janet had a fine for lion Allen, he was talking during the pledge. He never once looked at the flag.

Lion Ed fined Lion Jeannie because she is a Pepsi Holic and Pepsi has a pledge of allegiance on their cans without the under god in it.

Jeannie fined president Carol for calling her wacko at a party last night.

Carol fined herself because she has a BMI name badge on instead of a lions one.

Sid fined lion Ed for letting his wife walk around with just a dollar in her purse.

$5. Pete won and donated it to the  wild hog chili run.

Lotto tickets were won by  some guy from breakfast lions, sorry I did not get his name. 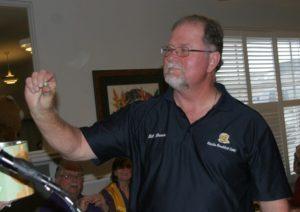 Bob Brown, from the breakfast Lions club get to go home with a shinny new marble, but no money

Marble drawing. Bob Brown from breakfast Lions (I did get his name) but he won nothing more then a marble.

Frank Ruiz, from young life was  with us on Friday. He began his talk with a letter from one of the teachers at Goshen school, we sponsored to go to the pumpkin patch last year. 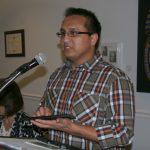 Frank Ruiz was with us from young life.

Young life is a  teen parent monitorship program. Their mission is to get into the lives of young kids and help them to become good parents and to share the love of god with them.
March 8 at the Visalia united Methodist church they are having a banquet, the dinner is free. Lot’s of  silent auction items.
A message tends to go out to young men, from Hollywood and the music industry. Things like party hard, have as many sexual relationships you can, and that is what life is all about. It’s no wonder that we have a large teen pregnancy problem in our communities. Young life is trying to counter that message with a faith based message, and hands on help.