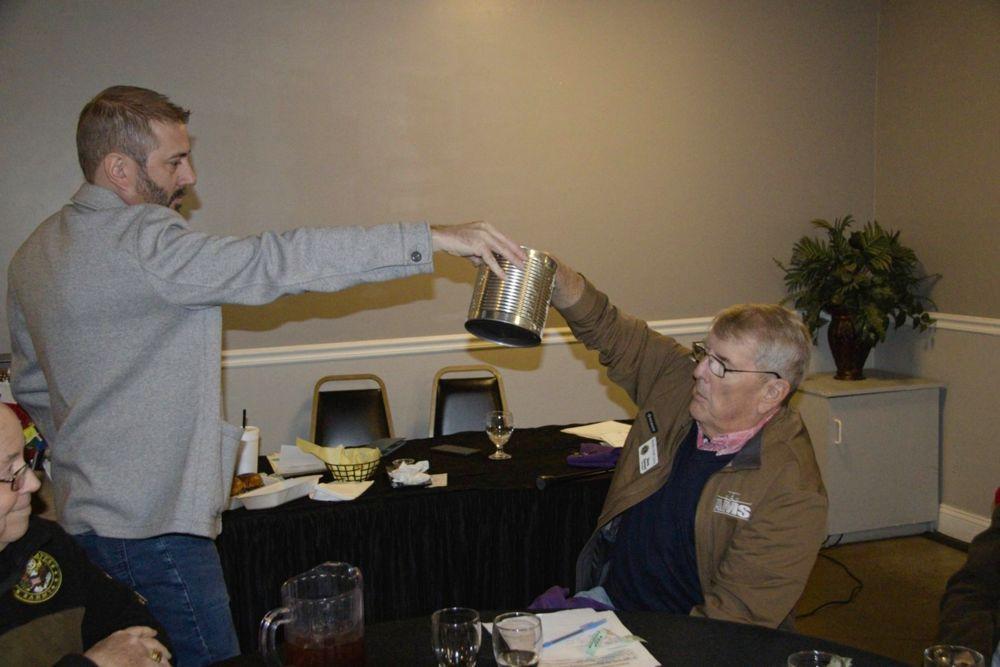 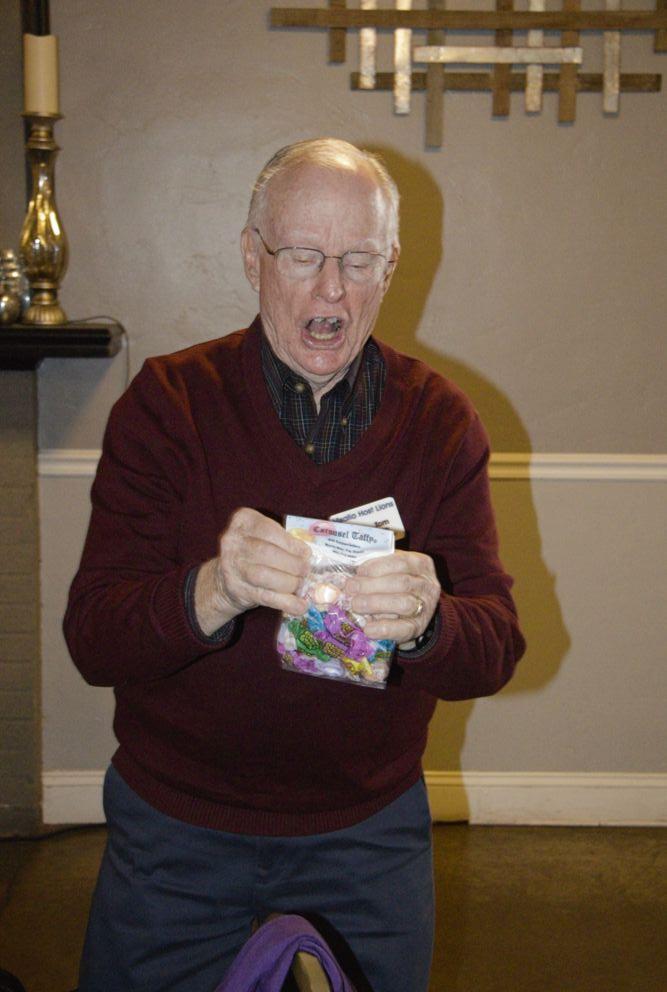 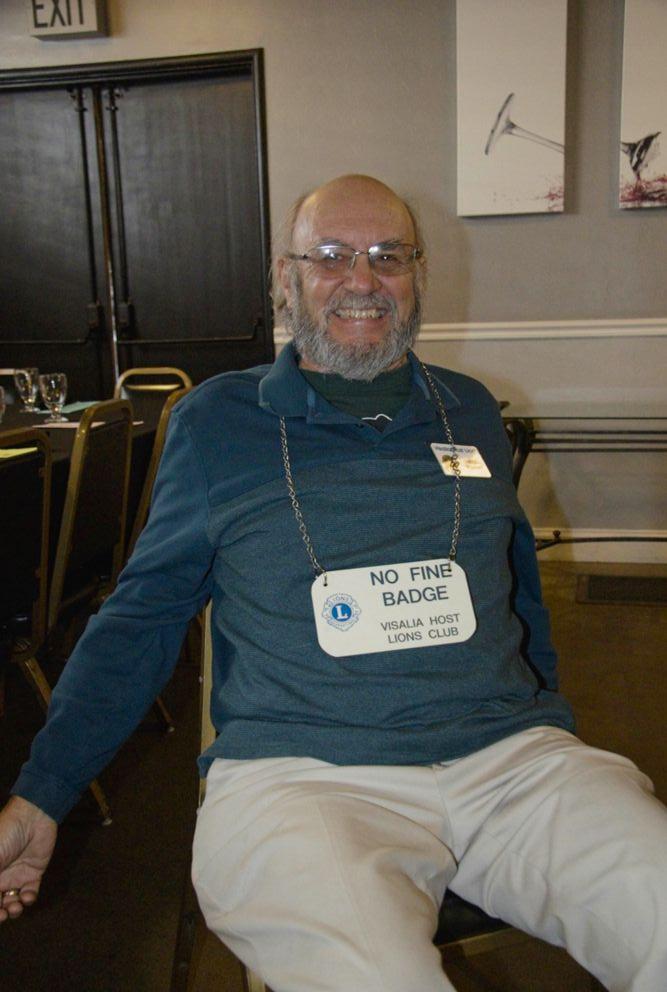 Lion Leigh Monconi is also excited to have won the no-fine badge.

Lion President Tony was at his son’s Wedding rehearsal, Hence, Lion Brent, our first vice president, was our stand-in leader today, and he called on Lion Pat to lead us in singing My Country Tis of Thee, Lion Craig to lead us in doing the pledge, and Lion Bob Line to do the invocation.

Standing in for Lion President Tony today, Lion Brent picked himself as the secret greater. (convenient)

Lion Steve made a last announcement about the Candy Cane Lane Parade on Monday, November 28th, the Monday after Thanksgiving. Our club is doing what we have done for many years, organizing the entrants so that they go down the parade route in the proper order. We will gather at the corner of Main and Liberty in front of Uhl Robber company at about 5:00, where Lion Steve will give instructions and paperwork. If you have not signed up, that’s no problem; show up, and if you have not done this before, there will be plenty of people to help.

Lion Craig, who had recently returned from a trip to Nepal, had a package deal consisting of Himalayan Honey, Keema Masal spices, and Prayer Flags purchased by Lion Roy for $18. The Honey is quite good, by the way.

Lion Tom Link had been to the coast and brought back a bag of what has become a club favorite, Salt Water Taffy, that went to Lion Pat for $10, who then gifted it to Lion Karen.

Lion Pat was happy his granddaughter was given the good citizen award at her school, and his grandson led a prayer at mass at his church.

Lion Steve was happy his grandaughter was voted the most valuable player on her volleyball team.

Lion Bob Bricker was happy that he recently got his driver’s license back after having cataract surgery. (Several of us wanted to make sure what his car looked like) and he had had a wisdom tooth pulled.

Lion Pat wondered if, without his wisdom tooth, that had dumbed Lion Bob down.

Lion Craig was happy the ski season at China Peak had started, and he would resume his job on the ski patrol the following day.

Lion Roy was happy that he had given his landlord at his studio notice that he would close the shop at the end of the year and move the business to his home. (no, I am not retiring, just changing how I do business)

Lion Allen was happy his son Travis was coming home for thanksgiving.

Lion Tom Link was happy that he could see a Light Show in Paso Robles last week.

Lion Brent was happy that he was going to Florida on his annual business trip with his wife and without his kids.

Lion Leigh was happy that the Special Olympics (which he heads in Tulare County) would be having their Bowling tournament for the first time in three years the next day.

Lion Tom Link was fined for being late. (what, Tom was late, shocking)

Lion Karen fined herself for having to leave early.

The $5 drawing went to Lion Tom Link, who donated it to the eye foundation.

The marble drawing went to Lion Steve, who did not draw the white marble.

Lion Craig gave a talk today about outdoor safety. Going over the different ways people get hurt and die in the outdoors. #1 was falls, and being unprepared was also high on the list, where people begin a hike or other outdoor activity and are not prepared for the unexpected, like getting lost and having to spend the night. 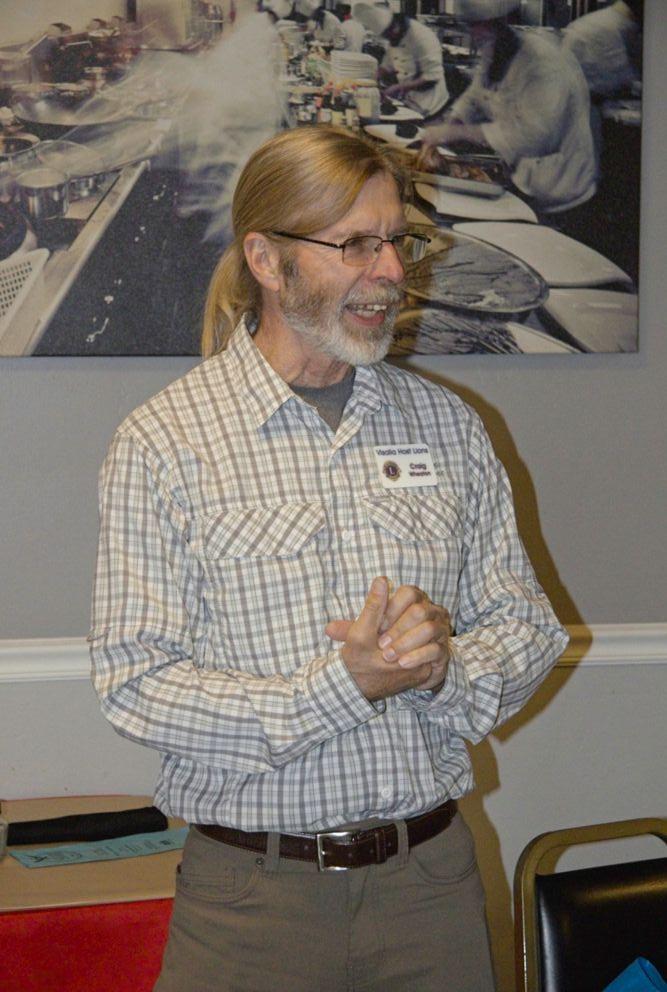 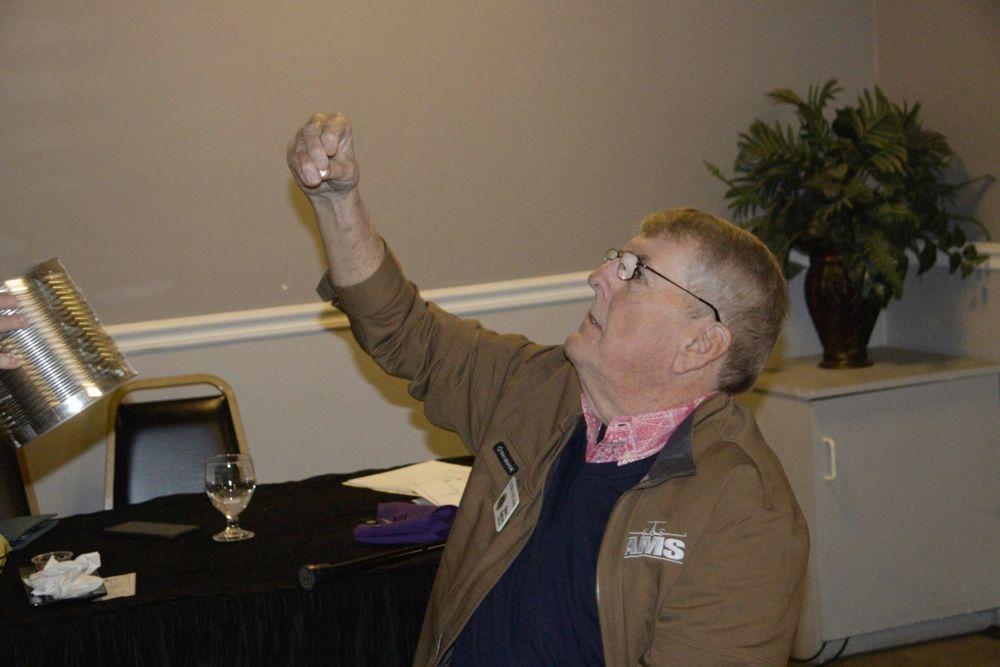 Lion Steve realized it was not the white marble that he picked out. No money! 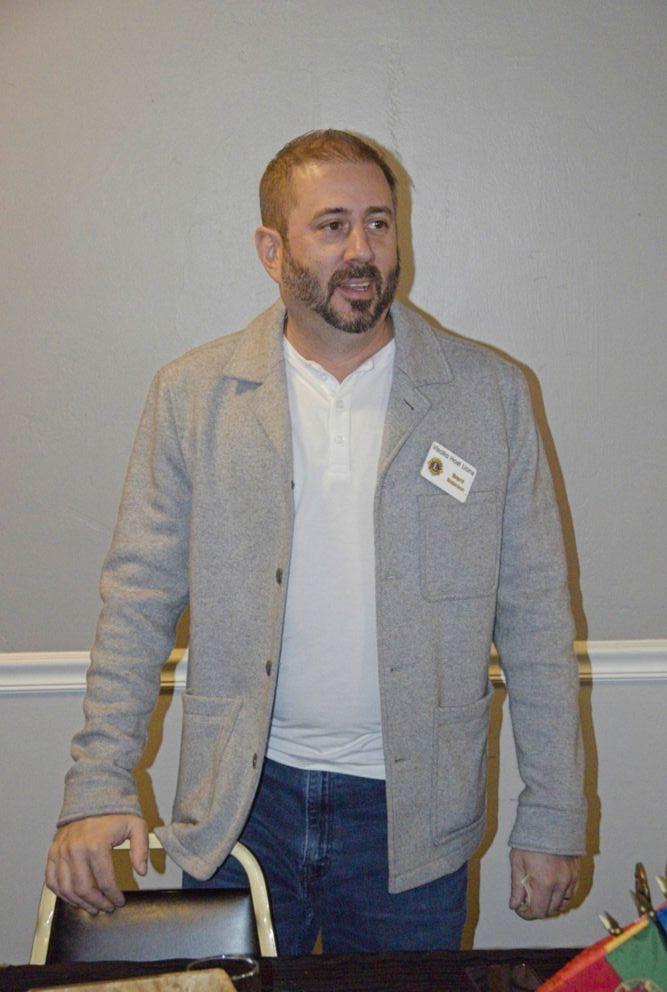 Our first vis president Lion Brent lead the meeting today and did a good job. 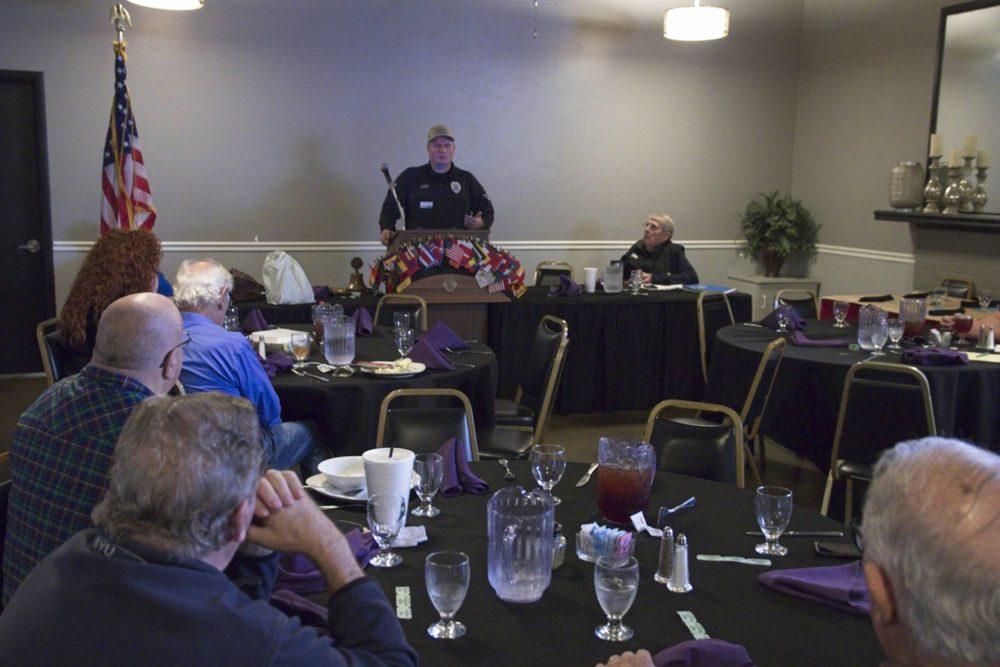 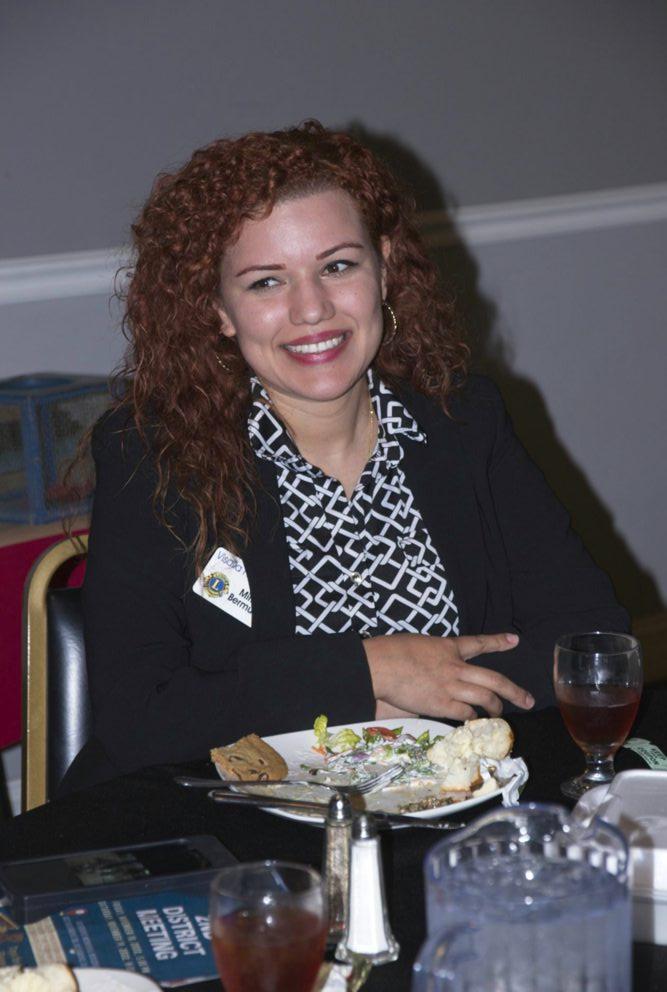 Lion Miriam, birthday girl for the month of November. 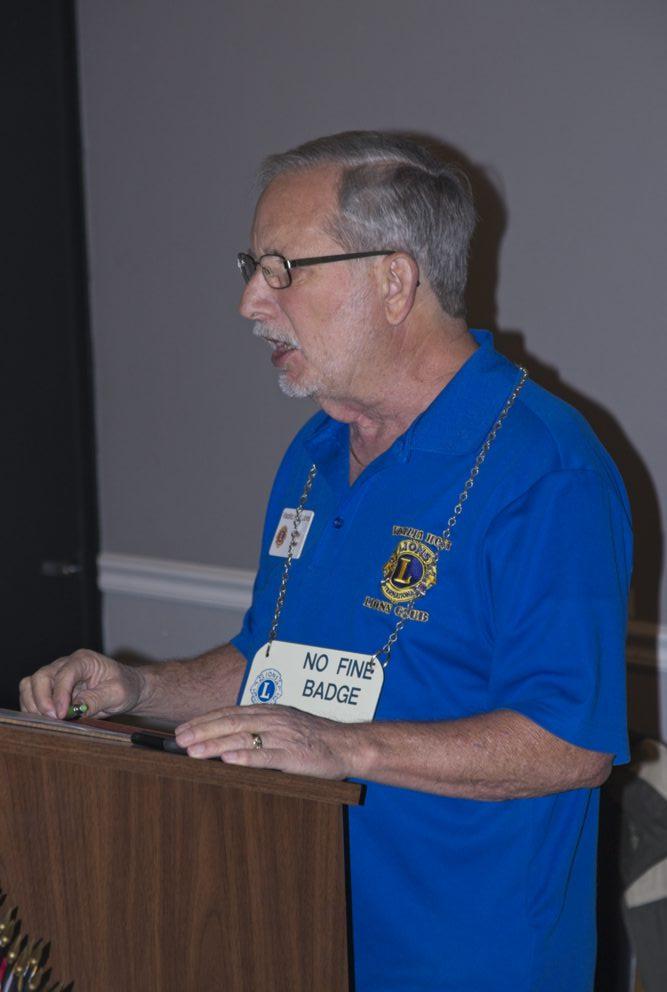 Lion President Toy leads our meeting
and gets the no-fine badge.

Our meeting today was led by Lion President Tony, who called on Lion Miriam to do the flag salute, Lion Bob Line to lead us in singing God Bless America, and Lion Pete to do the invocation.

We will be dark (no meetings) on the following days:

Lion Steve announced that, once again, the Host Lions would be the organizers of the 76th annual Candy Cane Lane Parade. Arrive between five and five thirty at the corner of Main St and Liberty, where Lion Steve will be with the info. A note; bring a headlight and a clipboard; they sure help.

We had one November birthday member present today, Miriam, and we sang happy birthday to her.

We had just one guest today, and he was our program, Curtis Brown from the Visalia Police Dept.

Lion Miriam had $10 happy bucks because she had gone camping at the coast (her first time camping) and had brought nothing back to auction off. She had a good time,  it was cold at night, but she was kept warm by the seven dogs with her.

Lion pat was happy that his daughter had to buy legos for her kids because she had made a bet. He told her, in the future, to make sure she could cover her bets.

Lion Dee was happy for all the veterans on this Veterans Day and also happy his granddaughter had a major part in a school play.

Lion Pet was also happy for all the Veterans and his grandson, who scored four touchdowns in a recent football game.

Lion Tony was $20 happy because his son is getting married on the 19th. He also noted that he would not be at the club next Friday because he would be at the rehearsal. (not sure if that part about him not being at club was a happy buck or just an announcement)

Lion Tony also had a happy buck for Lion Lauri standing in for him at last Wednesday’s board meeting.

Lion Karen fined Lion Steve because he called her Kathy at Wednesday night’s board meeting.

Lion Bob Line fined Lion President Tony because Ton’s son joined the Son’s of Italy Lodge in Hanford; when Tony replied that his son lived in Hanford, Lion Bob just mumbled and sat down but insisted the fine still stand. 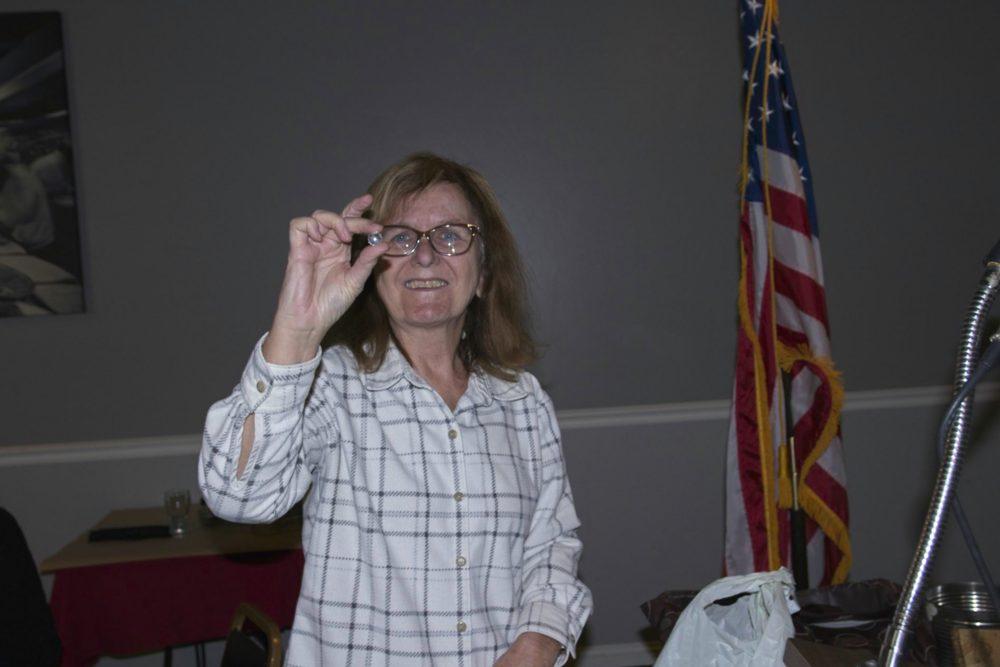 Lion Karen won the marble drawing today and did not pick the white marble, but she was still smiling. 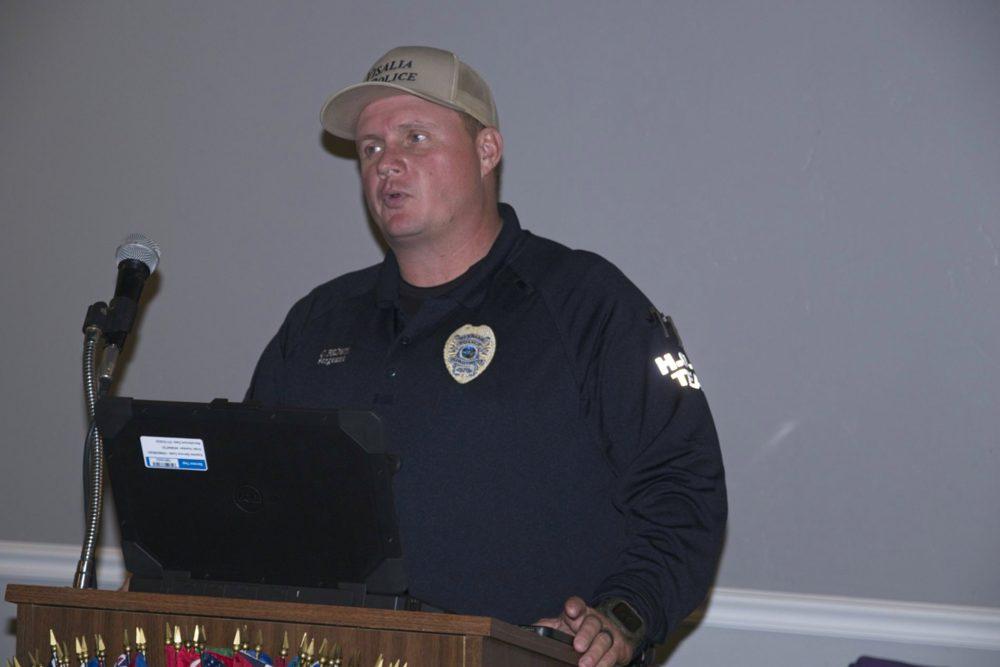 Sergeant Curtis Brown of the Visalia PD was our program today, talking about the homeless situation.

The $5 drawing went to Lion Roy again, and he donated it to the eye foundation.

Lion Allen, who had organized a group purchase of Quick Picks for the Mega Millions jackpot last week (we did not win), won the Lotto tickets today.

Lion Dee was our secret greeter today, and the only person to not to shake his hand was Lion Bob Line, who just happened to be sitting right next to him. 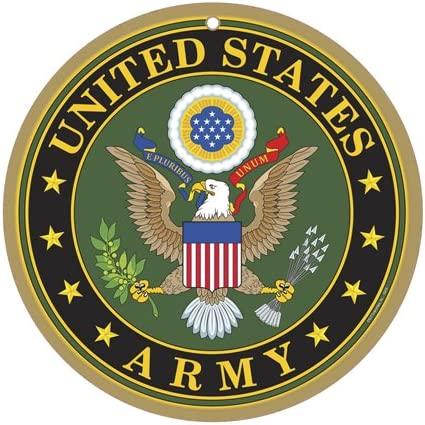 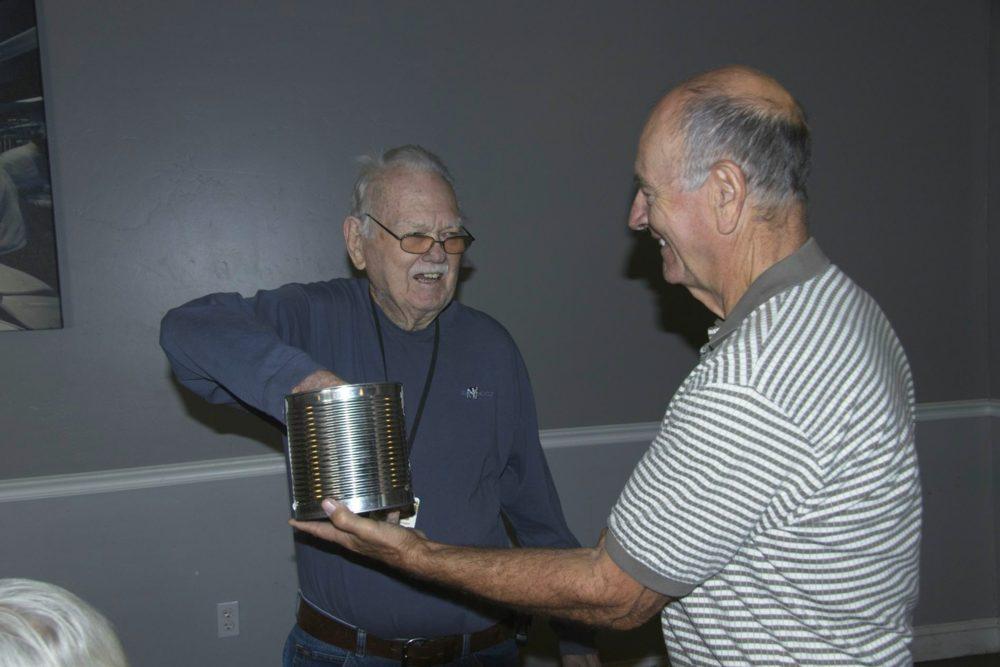 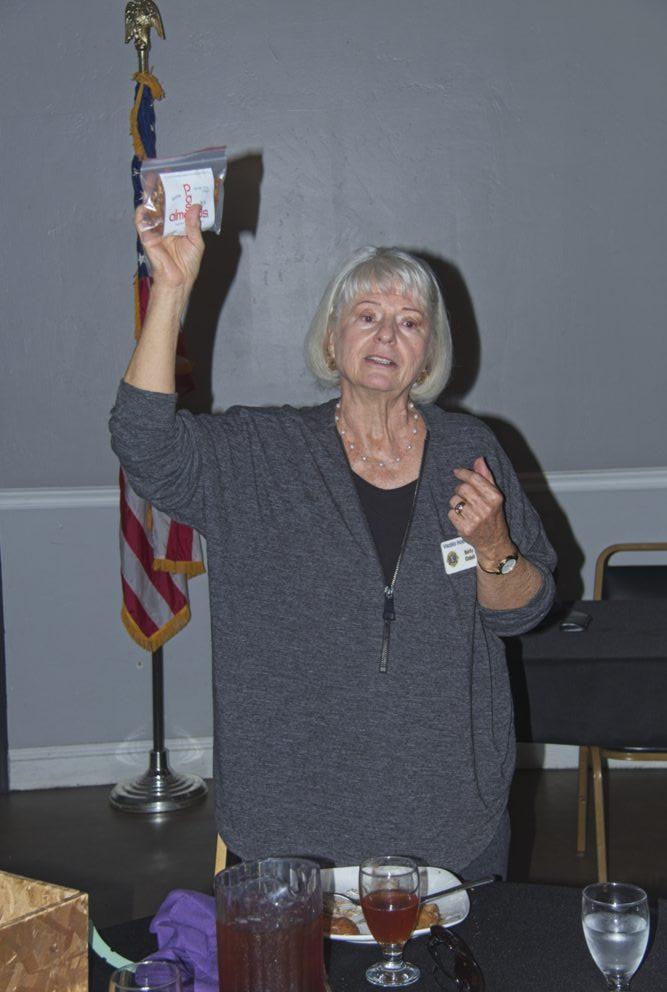 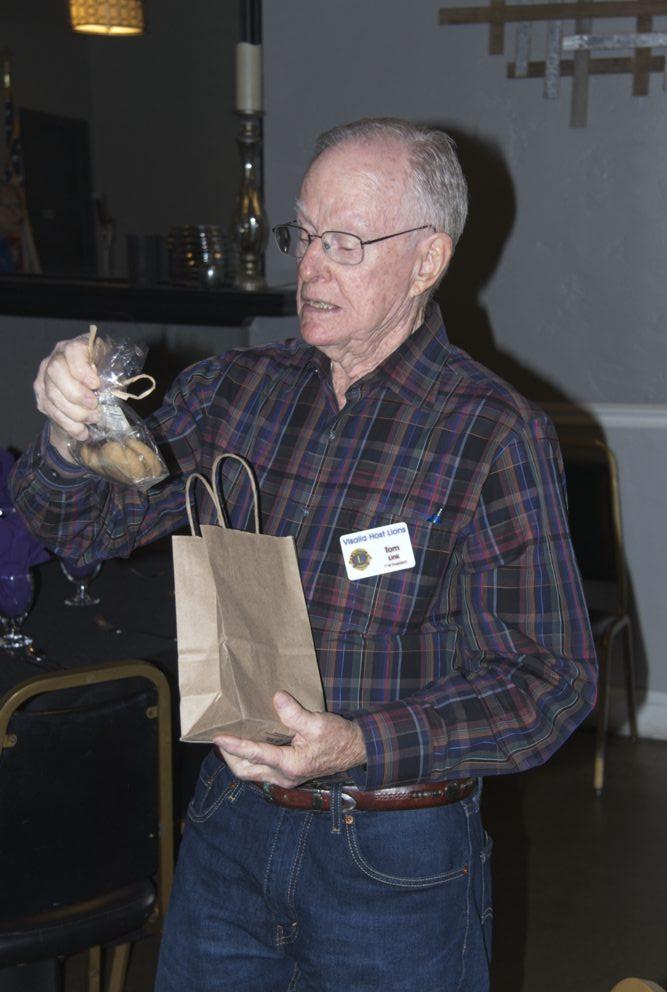 Lion Tom Link auctioning off a bag of cookies.

President Tony led our meeting today and had Lion Leigh do the flag salute, Lion Pat leed us in singing My Country Tis of Thee, and Lion Bob Line do the invocation.

The No Fine Badge went to Lion Leigh Mosconi today, and Lion Aaron did the Lion Tammer’s job.

Lion Elaine was our secret greater today, and everyone shook her hand.

Allen announced that we had done 52 eye screenings at the Trunk or Treat event at Quail Park Shannon Ranch on October 29th and thanked Lions Roy and Rick for helping him.

Note: Board meeting this coming Wednesday, the 9th, at Quail Park Shannon Ranch, be on the lookout for a menu from Lion Lauri.

Lion Allen was taking up a collection to buy Lottery quick picks for Saturday’s billion-dollar lottery. (no one won, so we all came up empty)

Our one guest today was also our program, Noe Garibay.

Today was a day for auction items; we started it off with Lion Betty, who had been to the coast for Lion Aaron’s birthday and brought back some Almond Brittle that went to Lion pat for $8; Lion Tom Link had also been to the coast and had a bag of cookies from the Brown Butter Cookie Company that were purchased for $7 by Lion Roy (and they were good) Lion Pete had a Golf Marker from St. Andrews golf course in Scotland, where golf got its start over 600 years ago, the marker went for Lion pat for $20.

Lion Aaron was happy that he and Betty had been to Avila Beach last week for his birthday.

Lion Leigh was $5 happy to be back at a club meeting after many weeks away; in that time, he got a new granddaughter and celebrated his 36th anniversary.

Lion Roy had a happy buck for the California September 11th memorial in Clovis, close to his home. The beautiful memorial even has a sapling from the tree that survived the attacks 21 years ago in New York.

Lion Tom Gaebe was happy for all those who had helped at the recent band review.

Lion Elaine was happy about the rain we had received and the coming rain.

Lion Karen was thankful for all the help selling pumpkins at the Trunk of treat.

Lion President Tony was also happy for the Trunk or Treat, where we sold $400 worth of pumpkins and had a great time.

Lion Tom Link was happy Halloween was over, as he had over 1,500 kids that evening. (did he have one of those counters that they have when you go in the door at Costco?)

Lion Pat was happy they had an old fashion hay ride in Elderwood with about 20 kids, from babies to teens.

Lion Allen fined Lion Aaron for going to the coast for his birthday instead of going to the New Members’ night in Caruthers.

Lion Tom Link fined Lion Tom Link because he had to leave early.  OK, OK, he fined himself, but I was just seeing if you were reading this. 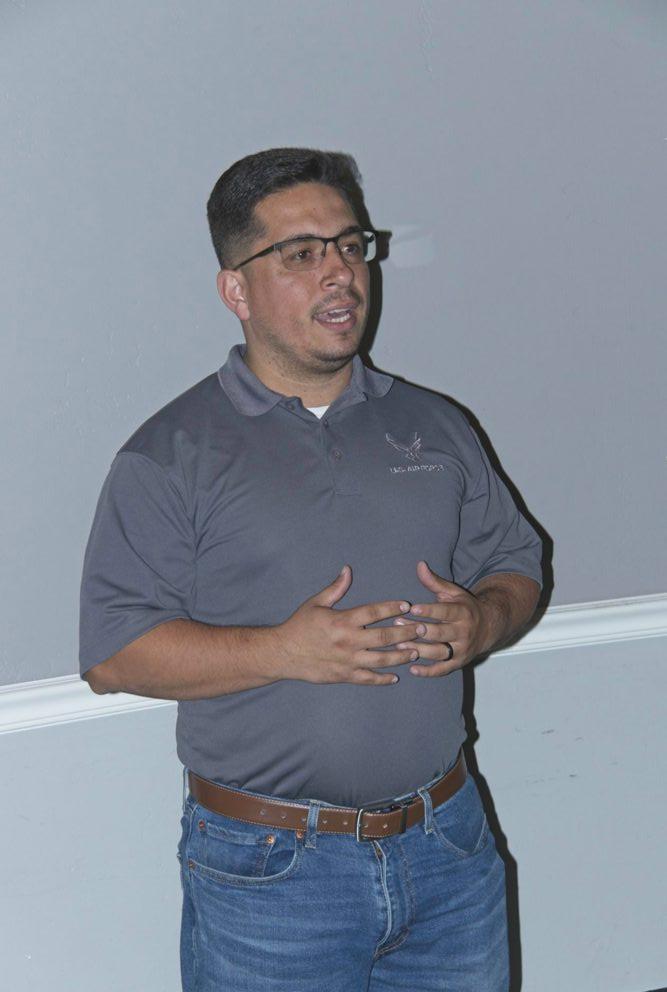 Noe Garibay was our program today

Lion Bob Bricker draws for the white marble and gets a black one. No win. 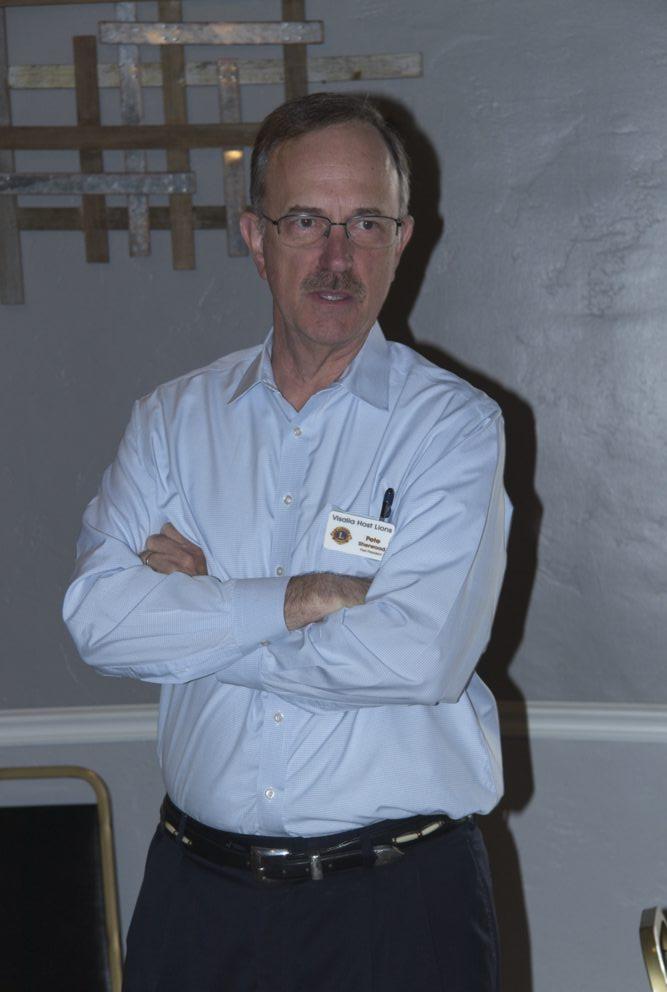 The $5 drawing went to Lion Roy, who donated it to the eye foundation.

Noe Garibay was our guest and program today. His talk was on cyber security. His list of experiences was impressive, from the National Guard to Lockheed Martin. His talk was about how to be safe online and how he is working on getting a Cyber Security program in the schools. He needs old computers for this project: if you have one, you can email him at:  noegaribayiii@gmail.com