Steve Gerrard announced that the Club will be dark after Thanksgiving on Black Friday.  Lion Steve also reminded Lions that the Candy Cane Lane Parade will be on December 2nd.  Volunteers will meet at Liberty and Main between 5:00 and 5:30 PM.

Lion Dee Baughman shared that the Mighty Oak Chorus will be performing at the Fountain Church on Friday, December 13th.

Lion Dee Baughman was happy to see rain in the forecast. Skier Craig Wheaton is looking forward to the snow in the mountains,

Lion Carol Jones shared the results of her ancestry DNA test. The test confirmed that her ancestors hailed from Portugal, Spain, France and Hanford-Armona.

Lion Brent Robinson is taking next week off work to spend time with his family.  It is also his wedding anniversary.

Lion Vicki Whitehouse’s husband continues to do well.  She was also happy to see Lion Justin back at Club.

Although she is now retired, President Ruth is still happy its Friday.

Lion Dee Baughman fined President Ruth after seeing a picture of her with famous politicians.

Lion Justin Levy fined himself for having to leave early.

Rebecca Peter, Brian Peter, and Richard Hoffman of the Club of Hearts described their efforts to discourage bullying in schools. The non-profit motorcycle club works to promote awareness of the problem, and encourages “upstanding” with victims to prevent further bullying. 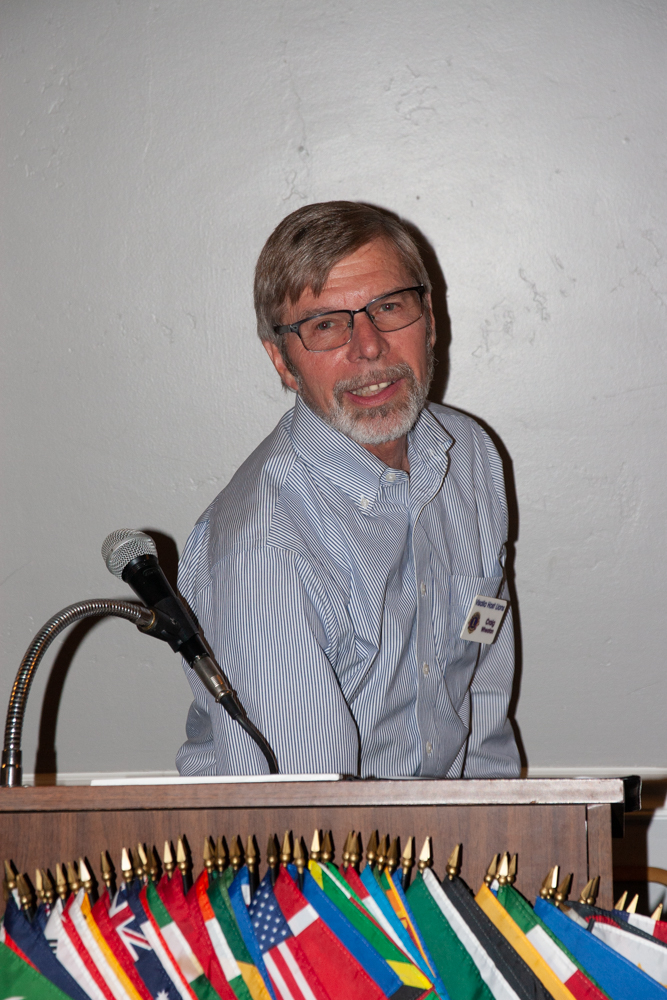 Visalia historian Terry Ommin was a guest at the meeting.

Vice President Craig reported that the Club’s Executive Board had approved the use of credit cards for meals and dues beginning week.

Secretary Steve Gerrard passed around a volunteer sign-up sheet for the Christmas Parade.

Lion Brent Robinson shared that his wife had repelled down eight stories recently to raise money for CASA.  He was also happy the stock market hit an all-time high.

Ed Jones shared that he and his wife Lion Carol have purchased a home in Prescott, Arizona, and will be moving there early next year.

Lion Pat Harrison shared that his daughter’s dog is OK after a recent illness.

Motorcycle rider Roy Dressel has been happy with our recent weather.

Lion Dee Baughman will be playing golf Monday, after receiving permission from his Cardiologist.

Allen Ventling had a good trip to Vegas with his sons.

Lion Vicki Whitehouse was happy her husband is doing well.  She was also glad to see Lion Justin back at Club.

Steve Gerrard took his grandson to visit Adventure Park and the Visalia Cemetery.

Lion Craig Wheaton donated five happy bucks for the return of his gavel.

Pat Harrison fined Lion Vicki Whitehouse for not sharing that her daughter has a great new job.

Secret Greeter Pete Sherwood fined several Club members for not shaking his hand prior to the meeting as required.

Visalia Historian Terry Ommin provided an update on efforts to commemorate Fort Visalia, which is the site of Visalia’s first settlement. 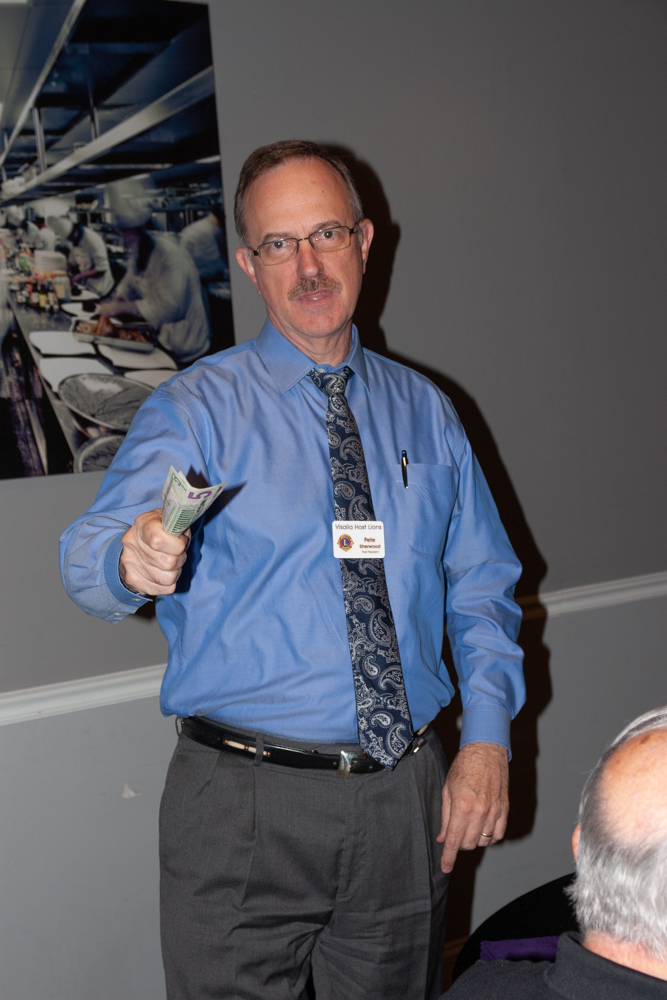 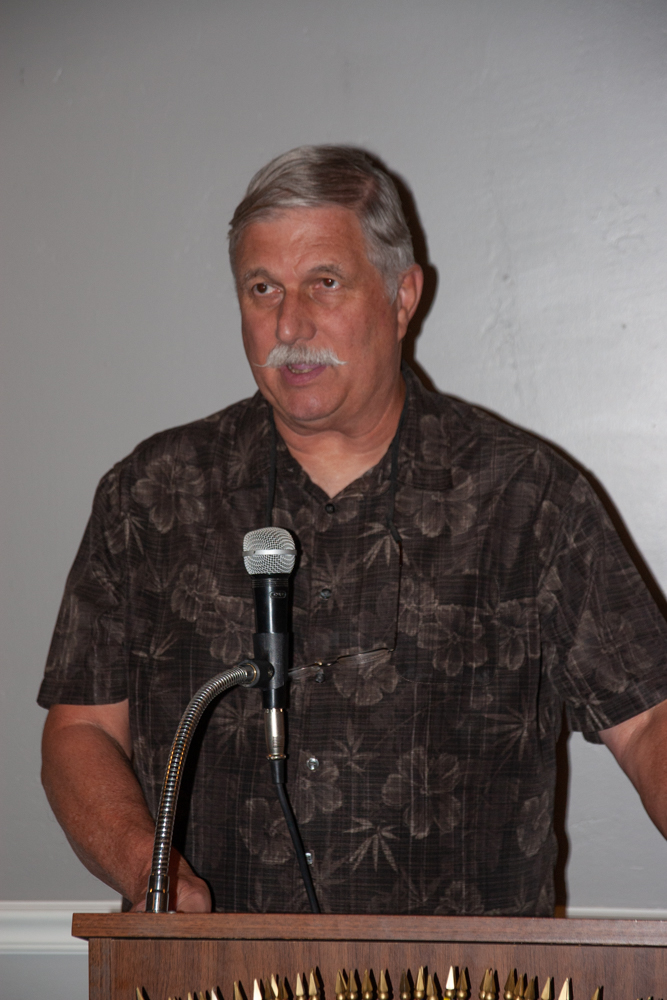 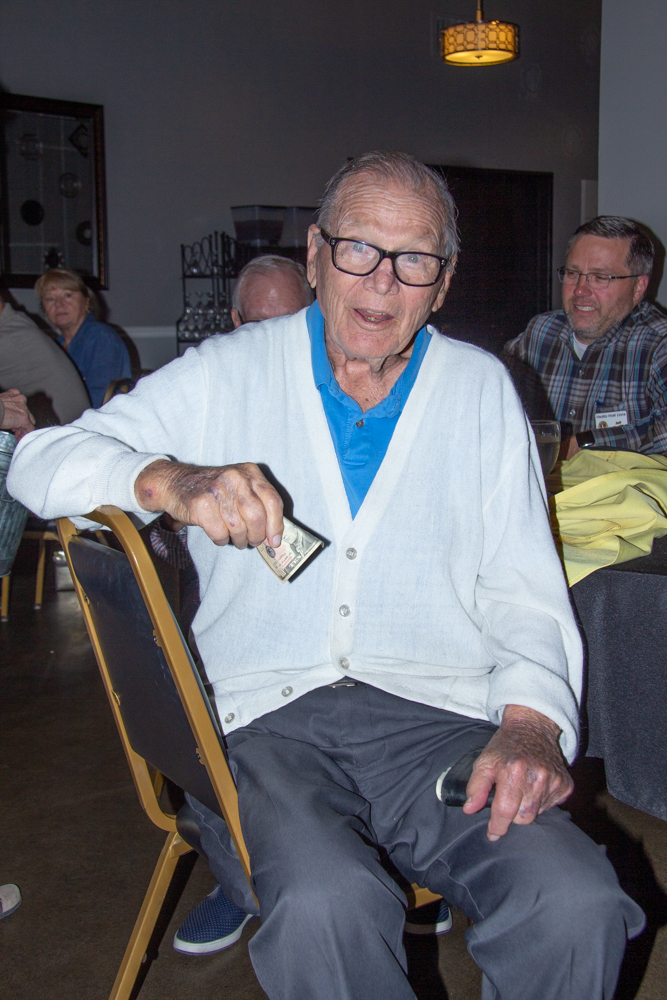 National Park Ranger Jenny Kirk was a guest at the meeting.

Lion Dee Baughman shared that the Mighty Oak Chorus will be performing a Christmas Program on December 13th at the Fountain Christian Church.

Lion Leigh Mosconi auctioned off a jar of strawberry habanero preserves from Gopher Glen near Avila Beach.  Lion Pat Harrison bought the jar for a donation of 15 dollars.

Lion Craig Wheaton donated five dollars in lieu of an auction item from his recent travels.

Lion Tom Link donated a happy bucks to recognize the armed services veterans in our Club.

Lion Brad was recently rear-ended in a hit and run accident, but was happy an off-duty police officer was able to get a partial take on the assailant’s license plates.

Lion Dee Baughman has been cleared by his doctor to play golf.

Lion Leigh Mosconi has a new great granddaughter.  He also placed in a Charity Golf Tournament for Special Olympics in Folsom.

Lion Vicki Whitehouse was happy – her husband is doing well, Lion Leigh Mosconi has returned to Club, and her son’s X-fit group raised over $4000 for Special Olympics.

President Ruth, although recently retired, was still happy it was Friday.

Lion Dee Baughman fined Lion “Tardy” Tom Link for breaking a longstanding tradition by showing up at Club on time.

Lion Tom Link fined insurance agent Brad Board for not sending him a calendar.  He also fined Lion Dee Baughman who reportedly has been scouring the internet for Veterans Day discounts.  Lion Dee responded that Lion Tom would be snagging a free Veterans Day lunch at a Park Visalia Veterans day Event.

Lion Jeff Meader was fined for looking scruffy.  Lion Jeff shared that he is raising money for cancer awareness during “No-shave November”. 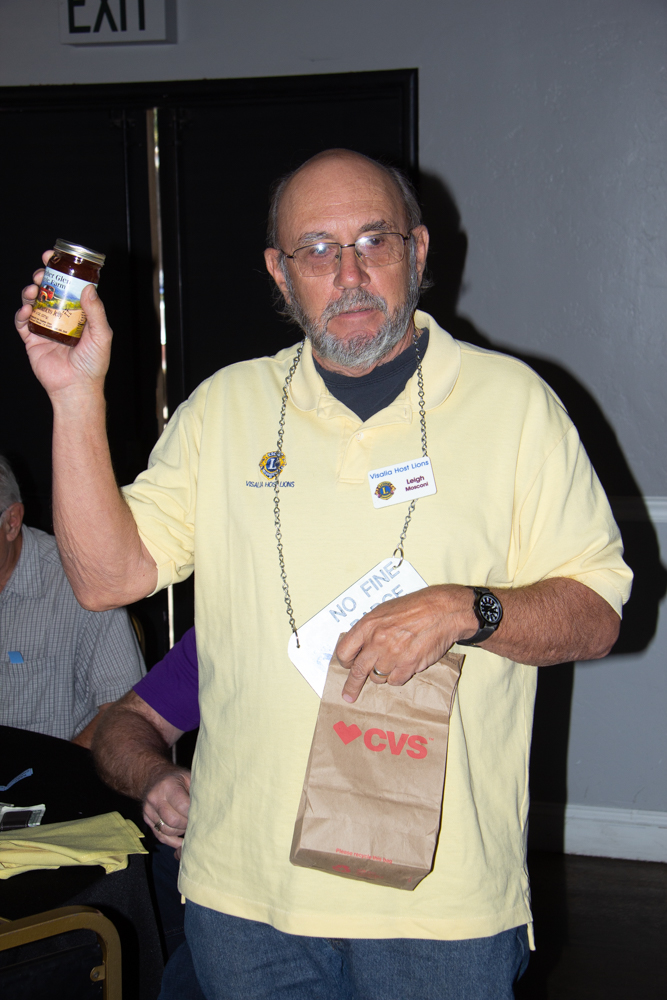 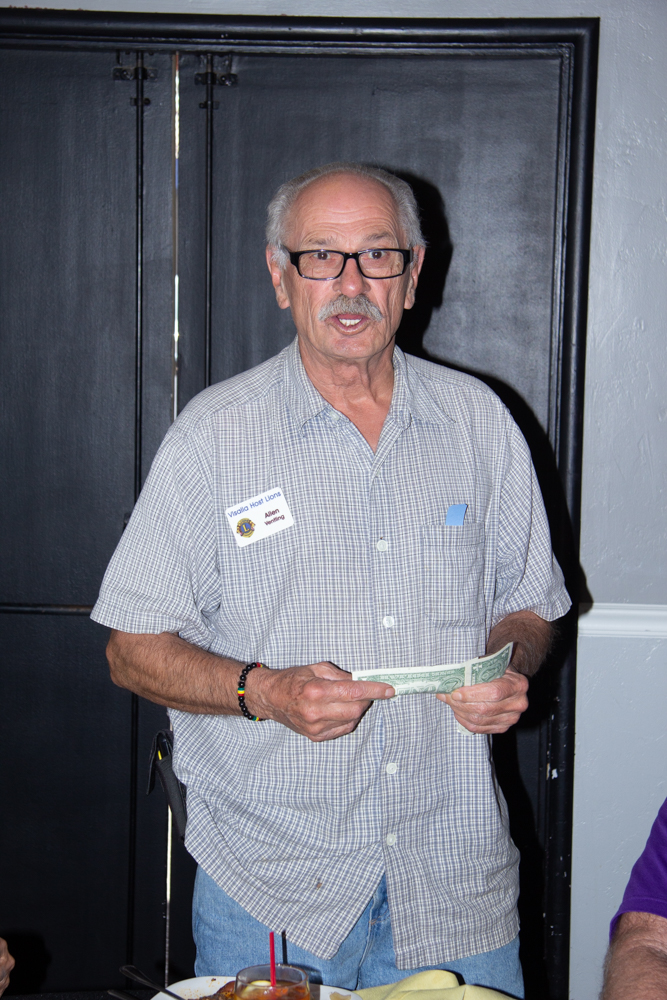 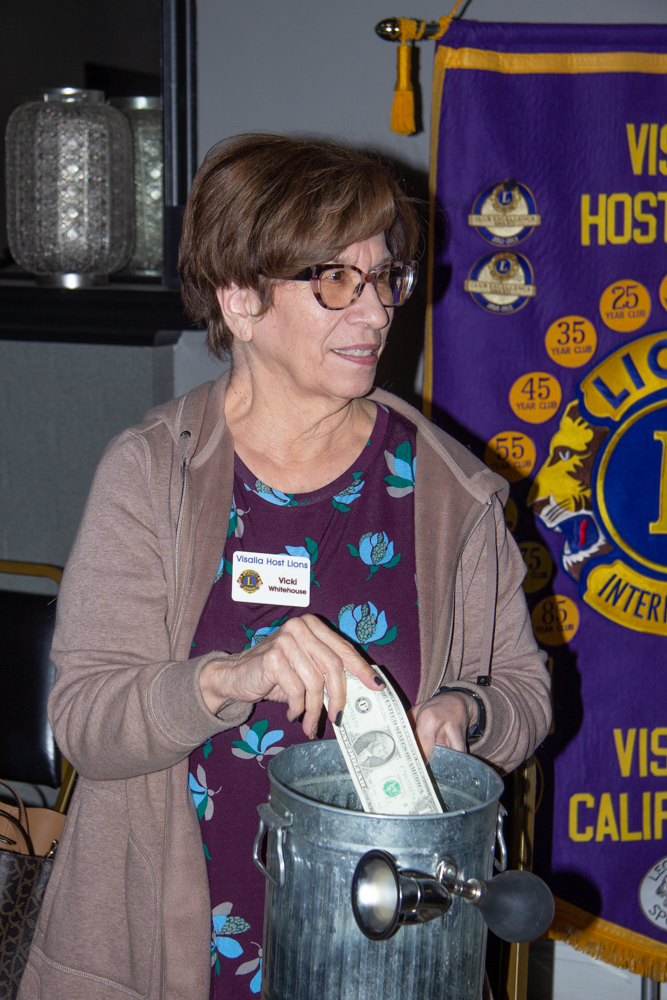 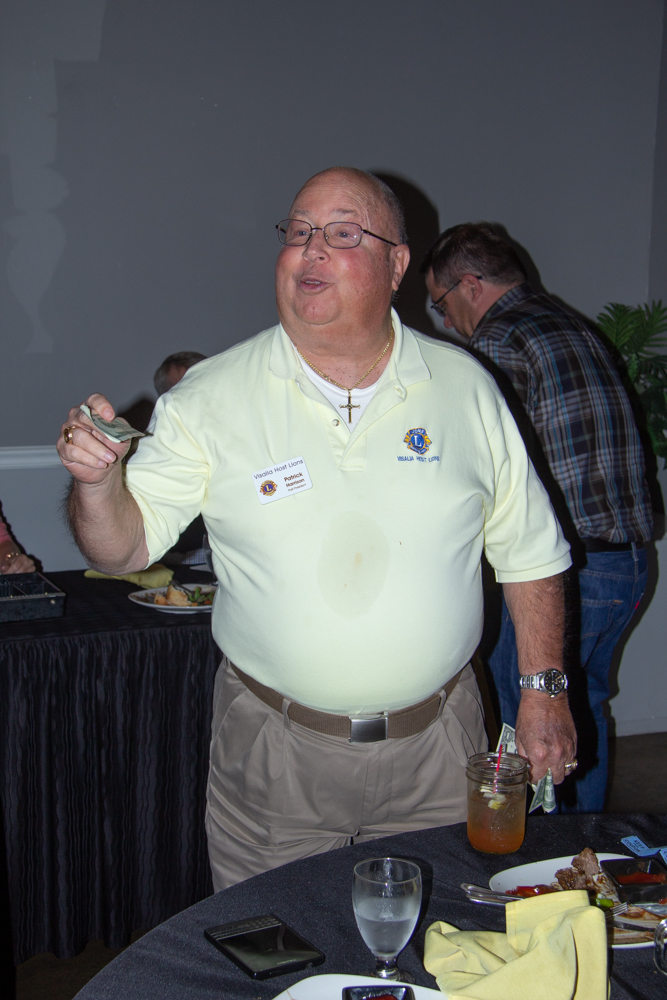 Our speaker, Hiker David Prewitt, was a guest at the meeting.

Vice President Craig reported that upcoming Club meetings will feature programs about volunteer opportunities in Sequoia and Kings Canyon National Parks, the history of Fort Visalia, and the Club of Hearts.

Lion Lauri Aguilar shared that the Murder Mystery Dinner has been scheduled for next Pi Day.  Volunteers are needed to serve on the committee for the event.

Back from her recent trip to Palm Springs, Lion Betty Odell auctioned off a tub of date butter.  Lion pat Harrison bought the butter for a donation of ten dollars.  Betty also brought back fudge which was purchased by Lion Melinda Blankenship.

Lion Brent Robinson donated happy bucks in lieu of brining back an auction item from his recent trip to Boston.  He was also happy with the outcome of the World Series.  Lion Pete Sherwood was happy “anyone but the Dodgers” won.

Lion Ed Jones was glad to see Lion Dee Baughman back at Club and doing well.

Aaron Odell had a great vacation in Palm Springs.  One highlight was a trip to the local air museum.

Lion Jeff Meader’s wife Caity will be an honored speaker at the Kaiser Foundation in D.C.

Lion Carol Jones was happy to see Brent Robinson back at Club.

Niners fan Brad Board was happy to see his team go 8 and 0 after they squeaked by in a game against the Phoenix Cardinals.

Lion Melinda Blankenship donated ten happy bucks for the Niners’ wins, Lions Lauri and Brent’s return to Club, and some OK news about the state of her knees.

Lion Pat Harrison showed off an afghan that Lion Melinda had knitted for his mother, who is a centenarian.

Lion Lauri Aguilar was happy to be back at Club.

Lion Craig Wheaton fined Lion Allen Ventling for startling him with his car horn before the meeting.

Hiker Dave Prewitt described his recent ascent of Mt. Whitney, the highest peak in the contiguous U.S., with Lion Pete Sherwood.  The climb to the top ended a six-day backpacking trip from Horseshoe Meadows.