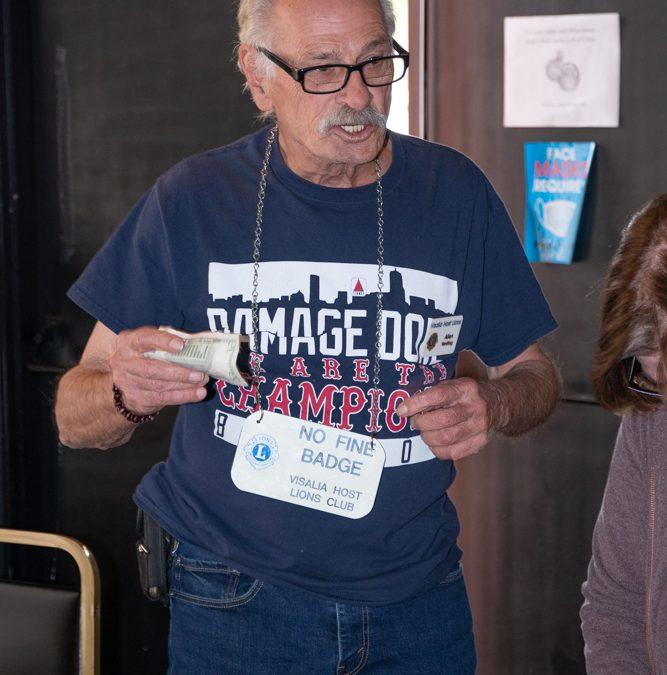 Lion Dee lead us in singing God Bless America. Our Flag salute was lead by Lion Betty and the Invocation by Lion John Parker.

Lion President Craig announced that the next board meeting would be taking place on Tuesday, April 13th at 5:30 on Zoom. Please use the following link to access

Lion Craig noted that we need programs. If you have any ideas for a good program, please refer them to Lion Craig at everydaycraig@yahoo.com or Lion Roy at roydressel@gmail.com, and we will get them set up.

Lion Craig announced that Lion Lauri has secured a date for the next Murder Mystery dinner, but it won’t be until next year. July 16th, 2022.

Lion Daryl Farnsworth was laid to rest on Tuesday, April 6th, at the Visalia Cemetery. Daryl was a long-time member of the Visalia Host Lions. He was president of our club in 1997-98 and an all-around good guy. He will be missed.

Lion John was happy that he has been able to go fishing several times lately, and he was happy his stepdaughter will be getting married soon. She is having her bachelorette party in Miami Beach, plus he and his wife are going on a trip with friends soon.

Lion George had a happy buck because he would fly his airplane one last time soon. Most of the club wanted either a warning just before takeoff or to make sure George would fly only over open fields for safety’s sake. (for the rest of us, that is)

Lion Allen was $5 happy because he won at the slots in Vegas, and he had one for having know Lion Darrell Farnsworth.

Lion Vickie was happy her husband was doing great; in fact, he was Trap Shooting in Oakhurst as we were meeting today. She was also happy for Lion Betty and Husband Lion Aaron for being in charge of our meeting last week. She also had a happy buck because her kids went to Walt Disney World for a week and had a great time.

Lion Karen was $20 happy because she was finished with cancer treatments, and she and Rick were fully vaccinated.

Lion president Craig was $5 happy because Lions Aaron and Betty filled in for him at last week’s meeting, and he was going to help close down the Ski resort this coming weekend. Plus, he and his girlfriend booked a six-day rafting trip down The Colorado River this coming July.

Lion Allen fined Lion Roy for making a mistake on the newsletter a couple of weeks ago, getting July Wooley’s name wrong.

Secret greater: Lion George was the secret greater, but that caused many arguments because George claimed that people fist-bumped him instead of shaking his hand. Most of us claimed that we could not be fined by following COVID protocols, so very little, if any, money was earned for the club.

Program: Nope, we didn’t have one.

$5, Lion Bob Bricker won it and gave it to the Leo Club.

Lotto: Allen, we’ll see if his luck holds from his Vegas trip.

Lion Pat won the ability to draw the white marble, but he had no luck. 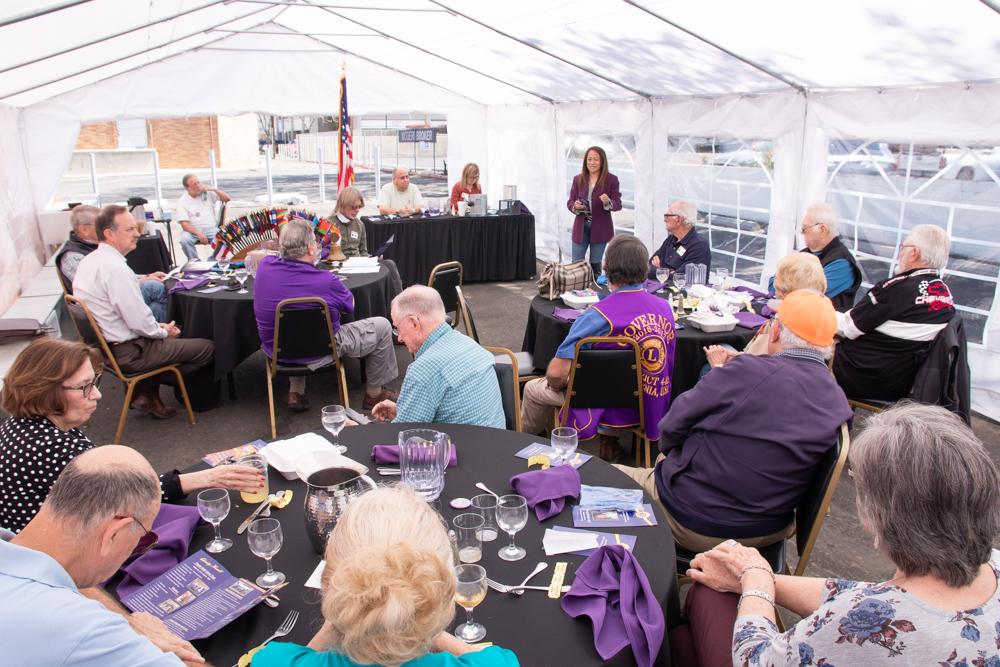 Today’s in-person meeting was held under the tent at Left of Center. Nice to see all of you, and hope this is will be a trend.

Lion Dee lead us in singing God Bless America. Our Flag salute was lead by Lion Betty and the Invocation by Lion Pete.

Lion Betty Wooley, who was our guest today along with her Husband Lion Kent, Lion Christy Kroell (more about Kristy later), and her husband, past district governor Lion Al Kroell, announced a clean-up at Bear Skin Meadows will be this Memorial Day. And yes, it is planned to be an in-person clean-up, not a virtual clean-up. (that would be great if we could get that thing working)

Lion Steve won the covited No Fine Badge and used it to great effect later in the meeting.

Lion Craig auctioned off an SF Giants mask that was purchased for just $6.00 by Lion Pete.

Our Tail Twister and all-around nice gal, Lion Vickie won the Lotto tickets and also the Marble Drawing, but it was for not as she drew a nonwhite marble. No know fact about the Lotto.

Lion Karen, our trusty treasurer won the $5 drawing and gave it to the Lions Eye foundation.

Lion Pete was happy that youth baseball has started up again and that his grandson what not only the lead off hitter for his team, but also the pitcher.

Lion Tom Link was happy that his barber was still alive and able to give him a haircut: did you hear that President Craig.

Lion Pat was $10 happy because a lot of work was completed around his house.

Lion Vickie was happy here husband was doing great and was out of the house.

Lion Karen was happy that Lion Roy was doing the Roar, and that all the guests were hear today.

Lion Roy, your Roar editor this week, had three happy bucks; one for being able to ride his motorcycle to work all week, one for the weather warming up, and another for getting, along with his wife, their second COVID shot the previous week.

Lion Steve was happy his son was the coach of a Cal Ripken baseball team.

Lion President Craig was happy that there were so many people at the meeting.

Lion Karen fined Lion Steve for being in a very serious mood when she arrived at the meeting today, he was not his usual jovial self. But it was Karen’s turn to be in a bad mood because she had forgotten that Lion Steve had won the no fine badge earlier in the meeting.

Lion Bob Line fined his son-in-law, Lion Pete because Bob was “forced” to wait a whole five minutes to see him in his office about some “important” legal matters last week.

Lion Vickie fined all of those who had made those “short” jokes all through the meeting. Your editor learned over the last weekend that over $150 was raised by that one fine alone.

Our program today was Lion Christy Kroell. Christy is running for our Lions District 4A2 Governor position for this coming year. Her handout had a long list of her accomplishments and time spent working in and for the Lions club and community. She asked for our support.

January 15:  Nick Vargas from “The Source”

January 22:  Soon to be Scheduled

February 5:  Terry Stafford   “Everyone Should Write A Book”

Allen Ventling will be traveling to Vegas to spend his birthday with his kids.

Bob Line will be attending happy hour at Quail Park.

Lion Roy Dressel fined himself for missing the last meeting.

Tom Link fined himself for getting his COVID vaccine ahead of schedule.

Roy Dressel, Bob Line and Tony Loliva were fined for not wearing their name badges.

Message from President Craig
.
Happy New Year fellow Lions!
.
I hope you are staying safe and healthy as the holiday season wraps up.    It seems like long ago when we had our last Club meeting.  I wanted to remind you that we are starting up again this week and have a whole line up of great programs.
.
Please make an effort to join us on Zoom, every Friday at Noon.   Make it a Noon on Zoom Friday.
https://brandman.zoom.us/j/7791819414
Meeting ID: 779 181 9414
One tap mobile
+16699006833,,7791819414# US (San Jose)
.
Here is a list of upcoming programs:
.
January 8:   Cecil Lopez sharing about “Leaf Magazine”
January 15:  Nick Vargas from “The Source”
January 22:  Soon to be Scheduled
January 29:  Greg Mauro   “Toastmasters”
February 5:  Terry Stafford   “Everyone Should Write A Book”
.
CSET:  Our Donation Makes a Difference!!!
.
Here is a wonderful email I received today:
.
Happy New Year to you and the Visalia Host Lions,
.
I am pleased to share with you that our compelling van wraps for Meals on Wheels have inspired the generosity of a group of nurses at Kaweah Delta to donate to the program! One of the nurses shared with us that they decided to make a donation because they saw the vans and thus learned about CSET’s role in operating the program.
.
The Club’s generosity is indeed making a difference in Visalia. Please share our story with your members and our thanks.
May peace and plenty be the first to lift the latch to your door in 2021 ~ an Irish toast
.
Warm regards,
.
Carla

We had a great group join us for last week’s Visalia Host Lions meeting.  It is hard not to have a regular in person meeting but it is heart warming to see those who can make it on Zoom.
.
Deborah Volosin gave a very timely and informative overview of COVID in our community in her review of how Kaweah Delta is currently impacted.  The good news is they are really good at accommodating and flexing as the COVID patients increase.
.
Announcements
.
The next meeting of our Club’s Executive Board will be Tuesday, December 8, 5:30 on Zoom.
.

Due to the new restrictions on outdoor dining, the in-person meeting originally scheduled for Friday, December 11 will be held on Zoom.  This week we have Mary Jane Jennings from Visalia Emergency Aid Council joining us for our Zoom meeting.  We had planned to have each of you to bring a toy to donate.  If you have already purchased a toy, you can drop it off or call VEAC at 732-0101 and they will make sure it gets to a deserving child during this difficult holiday.  We are also asking for an additional pledge to add to the donation that we will make to VEAC.   Just let Steve Garrard know the pledge amount and he will put it on your “tab”

Happy Bucks
.
Lion Roy Dressel’s son had COVID but wasn’t hospitalized and is on the mend.
.
Lion Allen Ventling’s son Travis had a mild case of COVID, His other son just got his BA!
.
Lion Leigh Mosconi donated a Remembrance Happy Buck for Rafer Johnson, Great Olympian from Kingsburg, and founder of California Special Olympics.
.
Lion Steve Gerrard had a great Thanksgiving.
.
President Craig donated a Happy Buck just for being there.
.
Fines
.
President Craig and Lion Steve were fined for gathering with family at Thanksgiving
« Older Entries