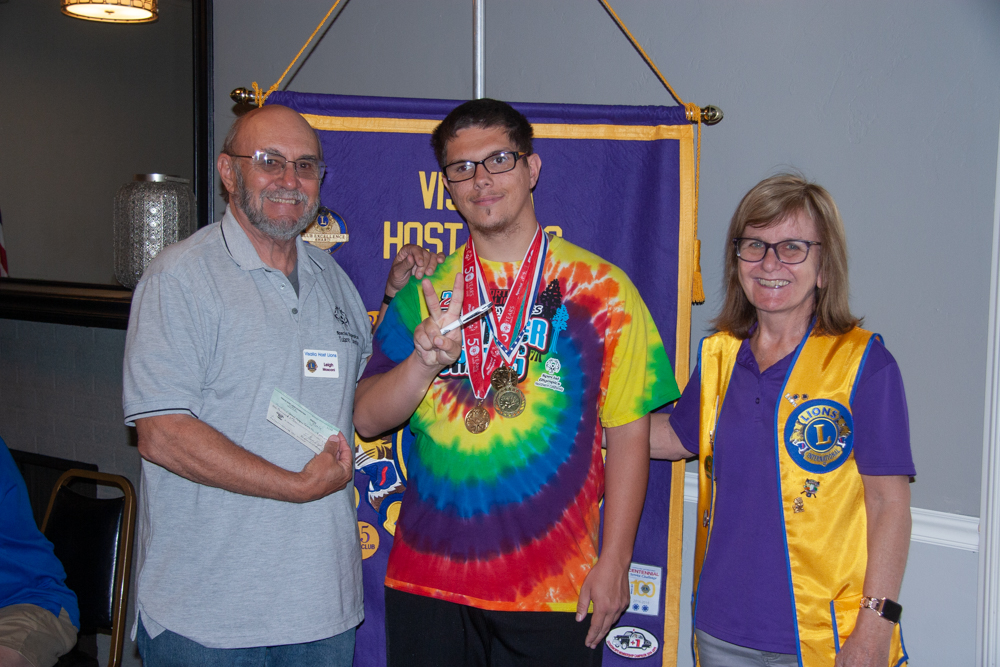 Lion president Karen opened our meeting by asking Lion Bob Line to sing God Bless America, our flag salute was led by Lion Ed and the Invocation by Lion Pete.

Lion Ruth was happy it was Friday…

Lion Pete was happy he got to play golf on the coast but had to do it in a galeforce wind.

Lion Melinda had a happy buck for almost being fully moved into her new house, plus another one for heave a set of three bosses that were the best in the world at work.

Lion Leigh was happy that Sabastion and his aunt Lisa were there today to talk about Special Olympics.

Lion Ed was glad he doesn’t live in Tulare (with all the problems that the city has been having lately) and that his Dodger blue was in first place.

Lion Vicki was happy her husband was still doing good.

Lion Carol was $2 happy, one for just being happy and the other as a little add. She volunteers at downtown Visalia’s simply chic boutique for the Visalia Rescue Mission, come on in and check it out.

Secret greater:  Bob Line, he was so popular only one person didn’t shack his hand.

Lion president Karen fined herself for drawing Lion Tom Links name for the no fine badge and depriving the club of much-needed revenue.

Lion Bob Line fined Lion Steve for putting pinwheels in his yead for easter and causing Bob’s wife to wonder why Bob had not done something similar.

Lion Allen fined Lion Vicki for giving him a little three-fingered handshake when she greeted him.

Lion Roy won the $5 drawing and gave it to the Leo club.

Lotto tickets, once again Lion Roy won this prize but won no money this time.

Marble drawing. Lion Vicki gets the chance to draw but won nothing. 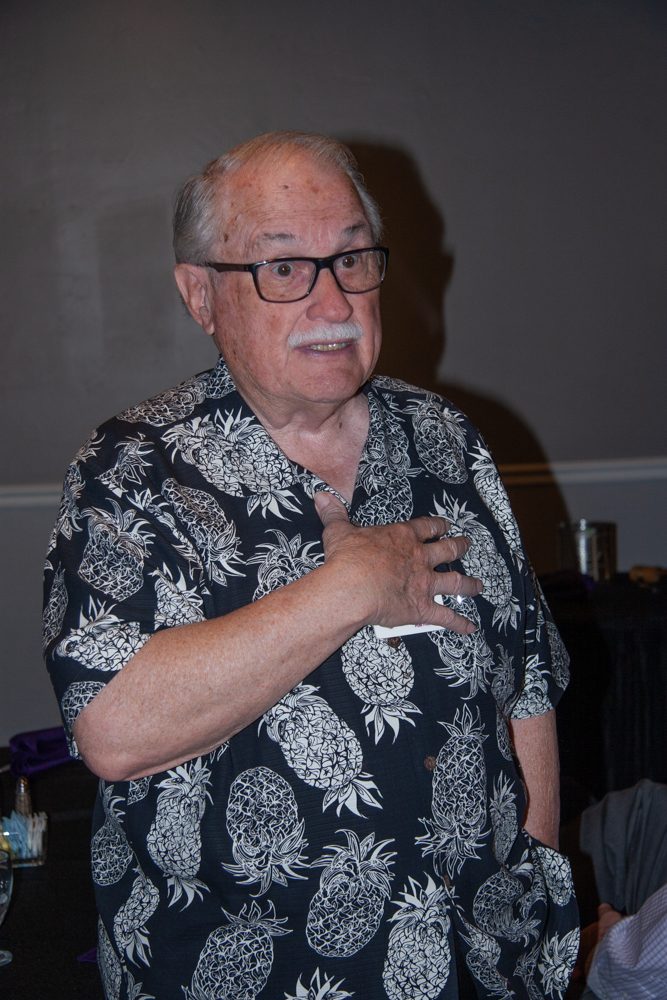 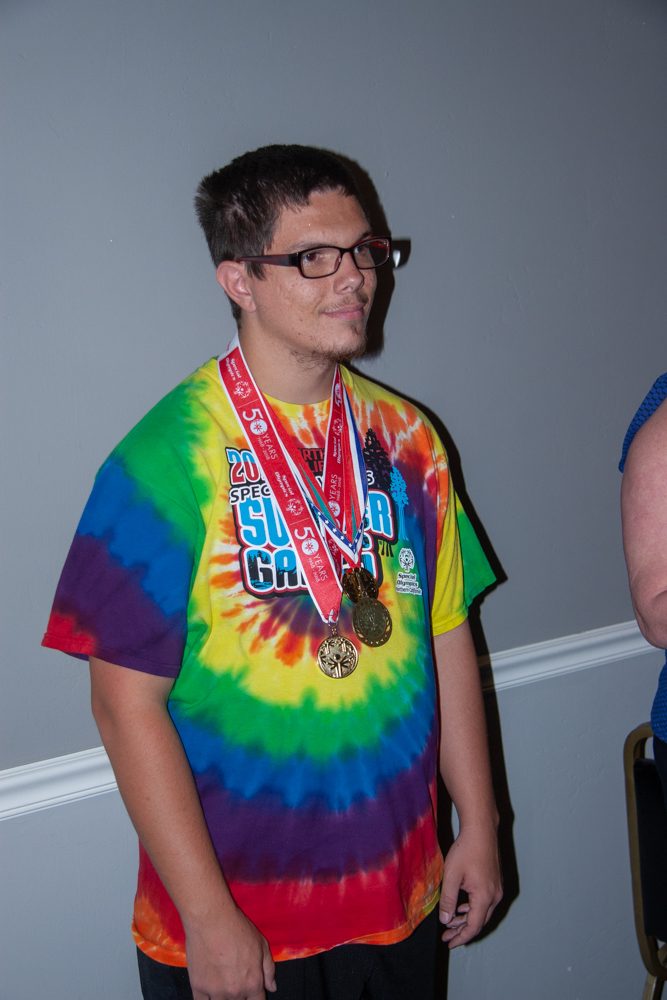 Lion Bob Line is happy that he put a deposit down on the new Quail Park.

Special Olympics athlete Sebastian talks about what it has done for him. 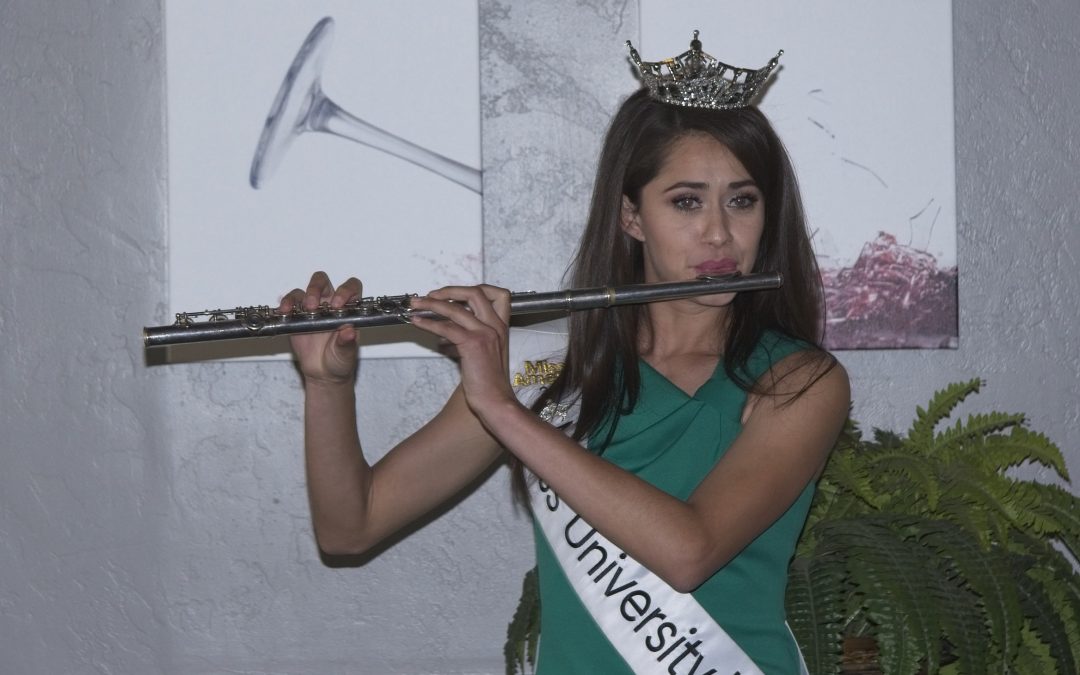 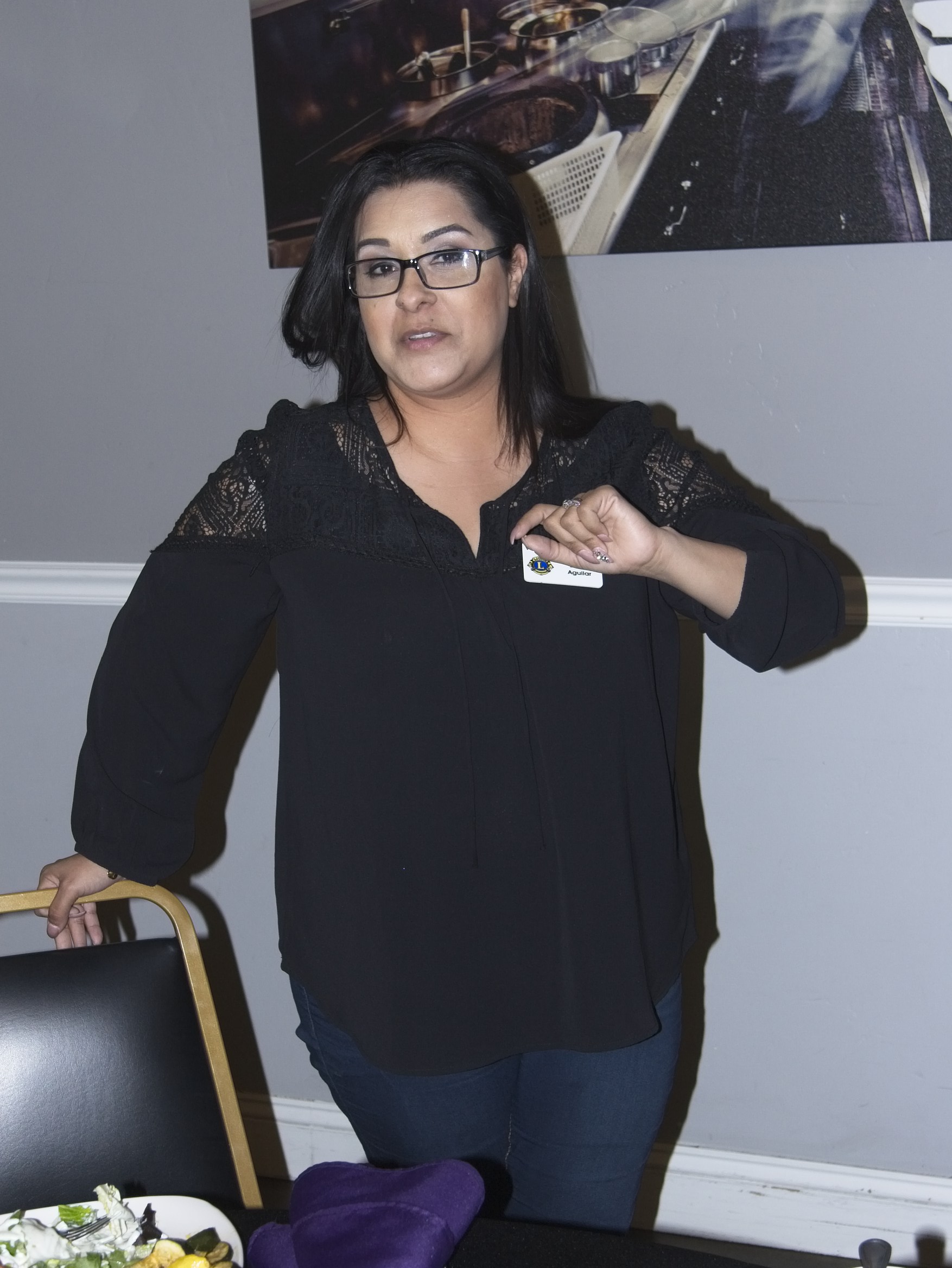 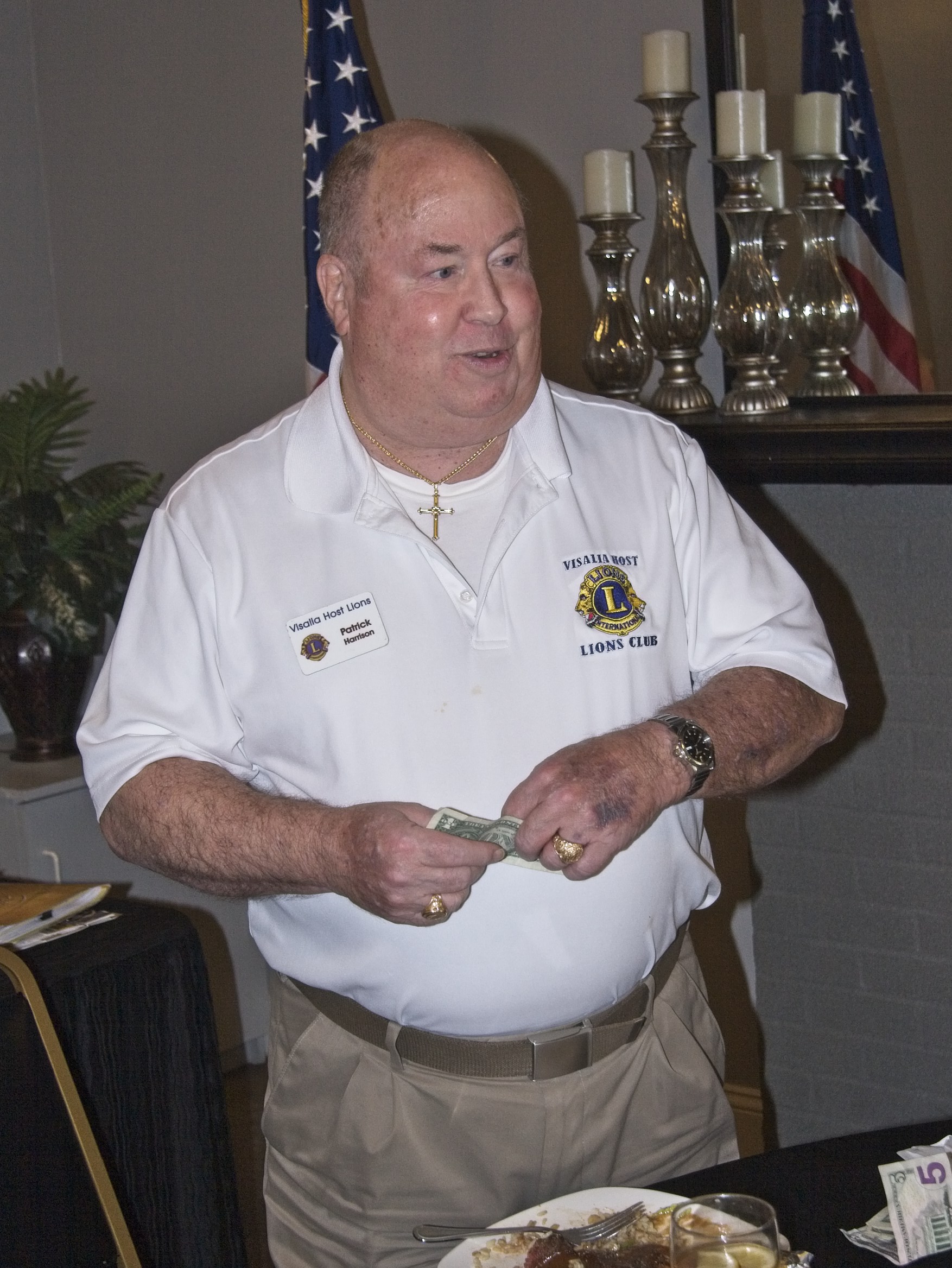 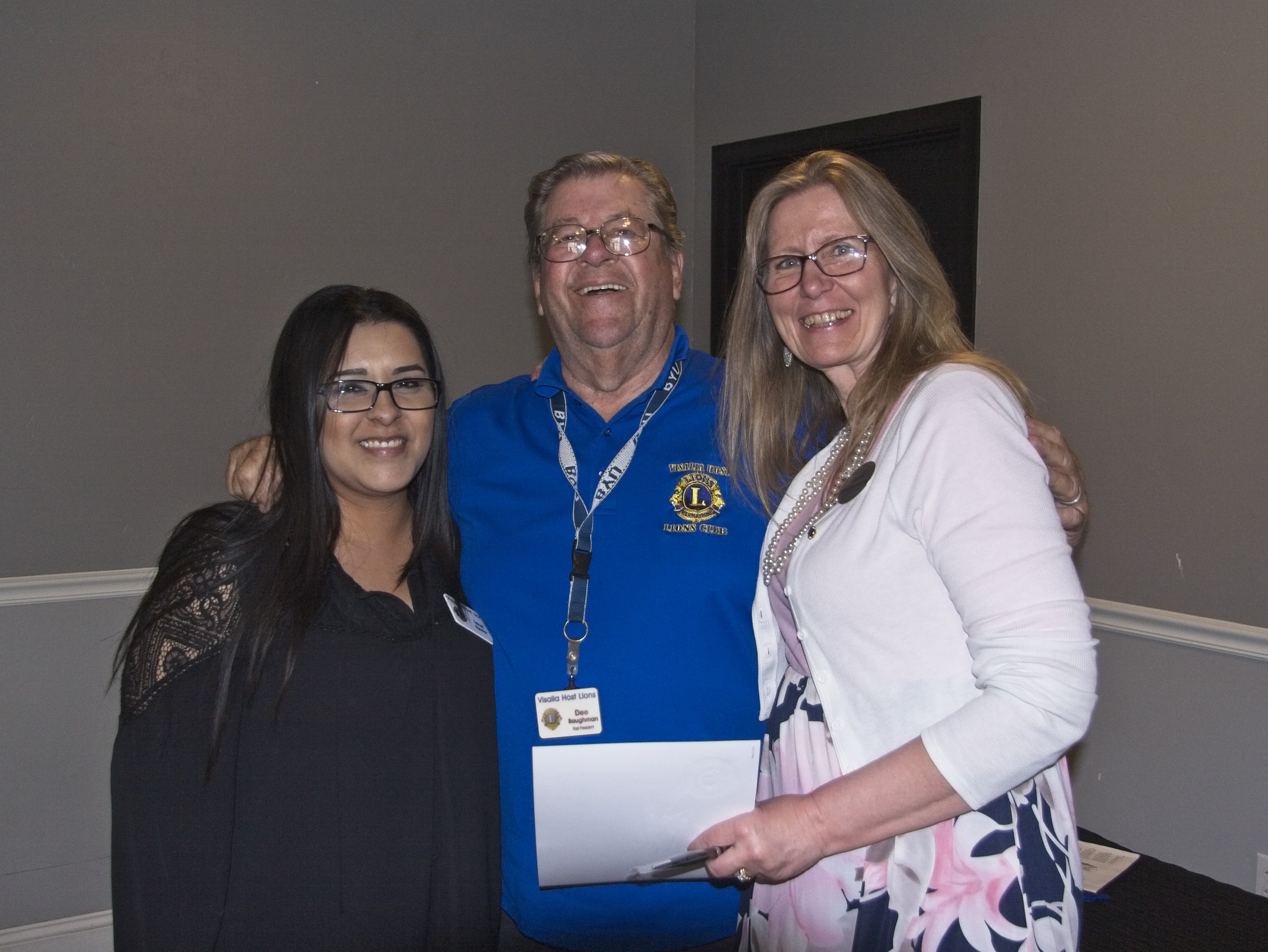 Lion Lori thanks the club for all their help with the Murder Mystery Dinner.

Our newest Member, Lion Kim Jenson is inducted into the club by Lion Dee, and seen here with her sponsor Lion Lori.

Our president Karen lead our meeting today and called on Lion Pat to sing our song. Lion Dee lead us in prayer and Lion Jeff the flag salute. Lion Melinda announced our guests and our program today were Juleann Smith and Elizabeth Sartuche from the Miss Tulare County Pagent and our program.

President Karen won the no fine badge, causing calls for an investigation on the selection process.

New Lions Kim Jenson announced that she had two tickets to Rock and Roll is Here to stay concert, put on by the Mighty Oak Cauris on April 27th.

Lions Jeff had a happy dollar for the success of the MMD.

Lion Carol had three happy bucks, one each for the times she won a prize at the MMD.

Lion Pat had happy bucks for the MMD, the food was great, the entertainment was great, and his friend won the gift basket from Roy.

Lion Ed was also happy for the success of the MMD and the Dodgers being in first place.

Lion Vicki was happy for the MMD’s success, for everyone who helped out and for her husband’s continued recovery from his heart surgery.

Lion Roy fined Lion Tom Link because Tom’s brother, the mayor, did not know that the MMD was taking place.

Lion Ed fined president Karen for not announcing the birthdays for April, bruising his fragile ego as his birthday is in April.

Lion Carol fined president Karen for calling Lions Melinda Blankinship by the last name of Bettencourt. Lion Carol also was going to fine her husband, Lion Ed but then thought better of it, saying “nevermind.” Of course, that lead to rampant speculation as to the reason.

$5 raffle went to Lion Pat, who donated it to the Leo club.

Loto Tickets went to Lion Roy, who will owe the club $1 as he won $10 with the scratcher.

Our newest member, Kim Jenson was inducted into the club by Lion Dee, and she explained that she works at Quail park, but also makes herself a resource to people who can’t afford Quail park but need assisted living. 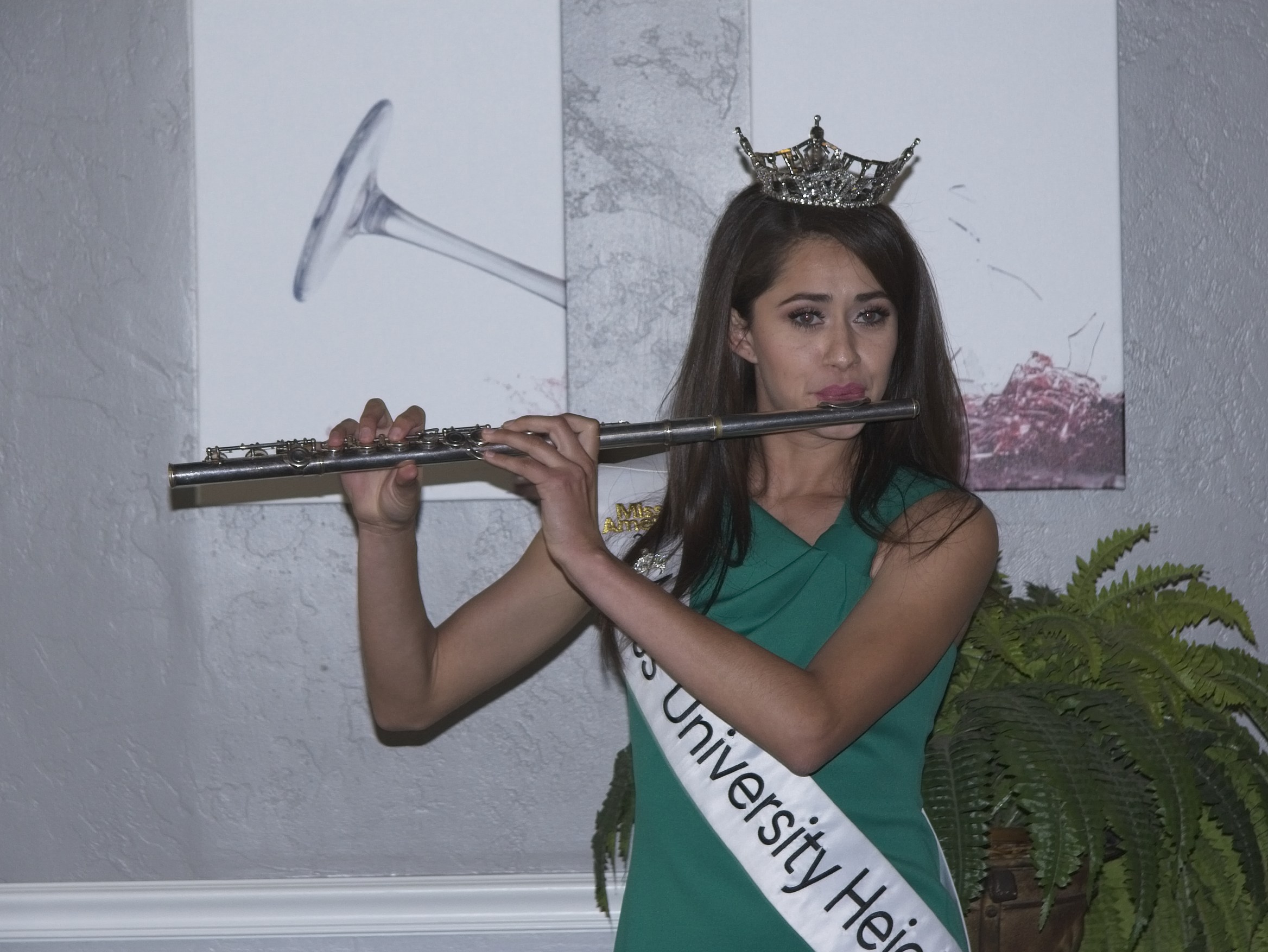 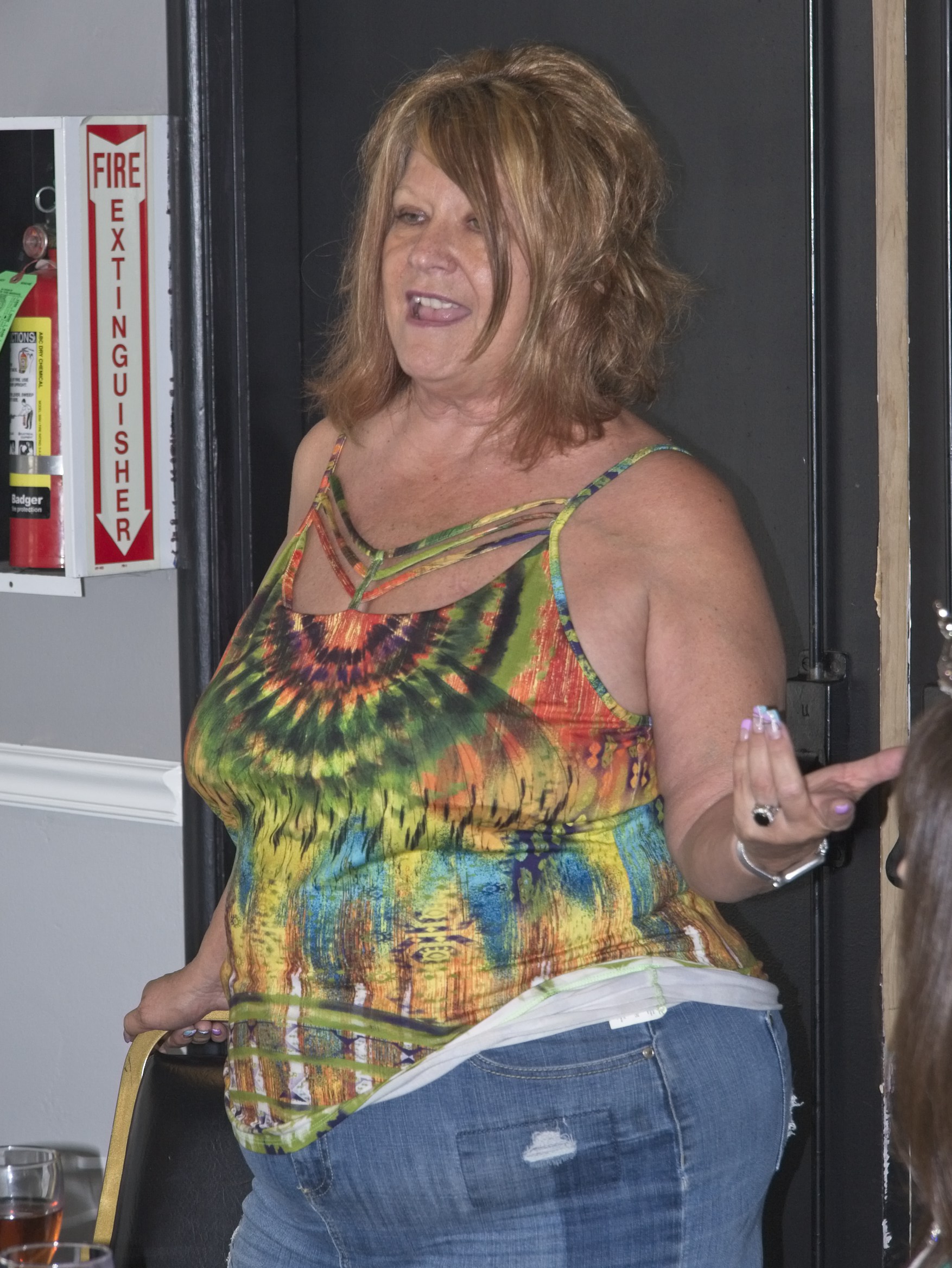 Elizabeth Sartache with the Miss Tulare County pageant plays the flute as part of our program today.

President Karen won the drawing for the free add today.

Juneann Smith, from Miss Tulare County pageant, Explained the changes that are going on as part of Miss America.

Lion Allen Ventling thanked members for their help with a vision screening event on Sunday March 24th at the Tulare Family Health Care Network offices. Twenty-three kids were tested and four were referred for eye exams. The next event will be on April 13th in Goshen.

Murder Mystery Dinner Chairperson Lauri Aguilar reported that 268 tickets have now been sold.  Lion Lauri said it had been a pleasure and honor to work with the committee.

Lion Don Landers donated a Lions suit jacket that will be auctioned at a District meeting.

Lion Don Landers will be travelling to Helendale and Vegas.

Dodgers fan Ed Jones was happy to see his team in first place atop the National League Western Division.

Lion Steve Gerrard donated a happy buck in honor of Lion Lion Lauri and her committee.

Lion Craig Wheaton was happy to be back at club.  He also joked that the San Francisco giants were only one game out of first place.

Lion Pete Sherwood had a chance to play golf with old friends from the Bay Area.

Lion Vicki Whitehouse shared that her husband continues to do well.  She also thanked Committee Chair Lauri Aguilar for her efforts.

Lion Dee Baughman was teed off at Lions Bob Line and Tom Link for talking while he attempted to play golf.

Lion Melinda Blankenship fined Lion Dee for a joke he told and Lion Tom Link for being late for the meeting. 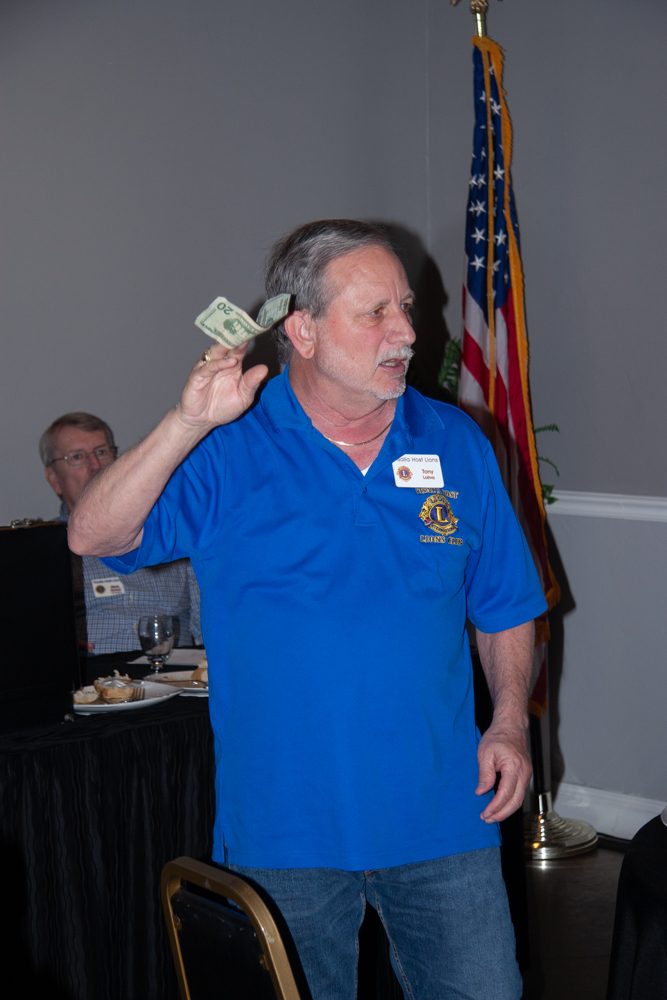 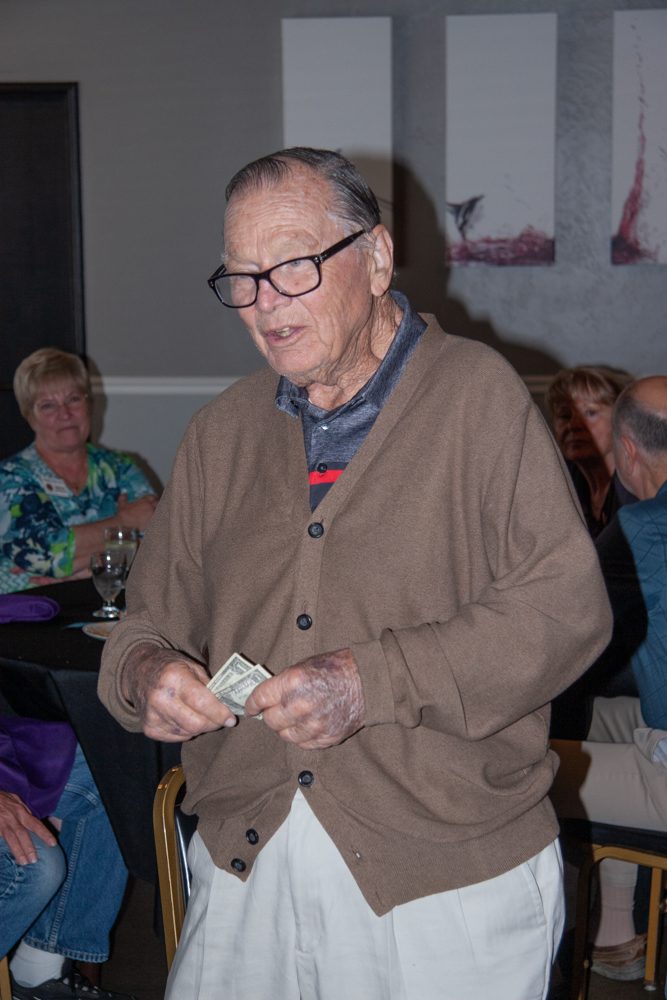 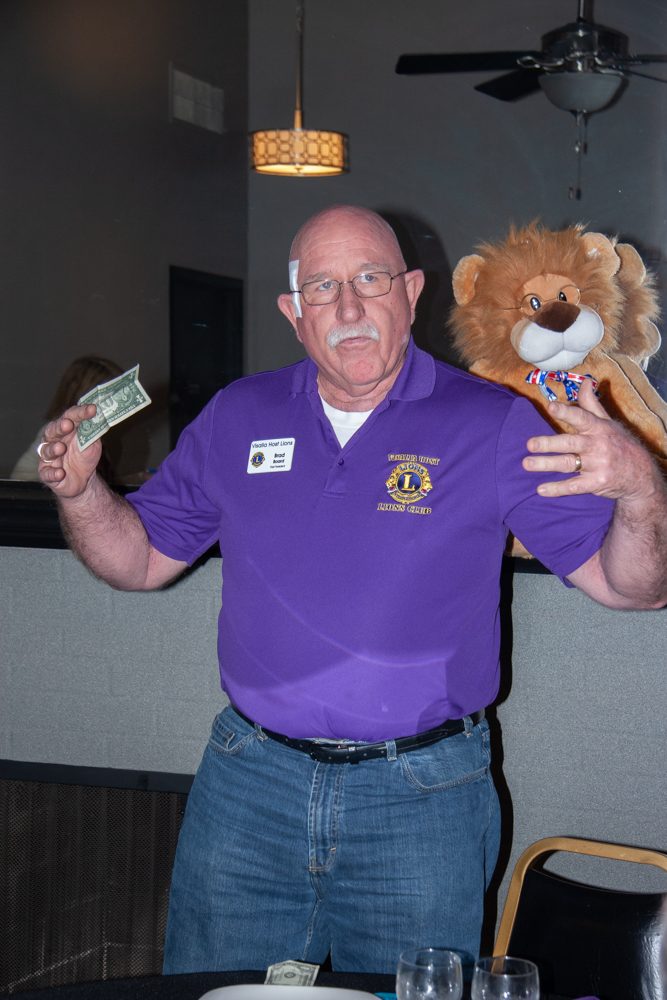