Lion president Carol lead us today and asked Lion Dee to lead us in singing My Country Tis of Thee.  Lion Allen lead us on the flag salute, with Lion Ed doing the invocation. 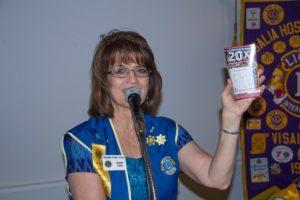 Lion Allen announced that on Thursday things went well with the  vision screening at Goshen school, they screened 43 kids with only 6 kids getting recommended to a eye doctor.

The Club directory is ready to be published again this year and it went around the room for members to check out to make sure their info is correct.  If you have not been to a meeting in a few weeks please send us an email noting the address you would like to use for the club. Your can send it to Lion Steve Gerrard  at  sagdad@hotmail.com

Lion Malinda sent a list around for those who want to order a Host Lions shirt,  if you want a shirt and did not see the list then contact Melinda at mblanken@kdhcd.org

Lion Dee announces he talked to Lion Pat Harrison. Pat has been recovering from an  heart operation. He will have a stent put in this coming Wednesday and that should be the last of the procedures for Pat and we wish him a speedy recovery and hope he is back soon.

Lion Carol had an auction item from Mark Davidson, he won the lotto winner last week and donated it back to the club. Three spots were  winners.  Lion Ed paid $8 for it.

Lion Steve announced the Save Mart shares card amount for the last quarter and Lion Howard guessed the closest amount, He guest $195.00 and the check was was $194.14.

Lion Howard was happy because of receiving his Melvin Jones  award last week, $5

Lion Dee reminds everyone that the Giants are in first place and were 5 games over the Dodgers.

Lions Craig was happy for the vision screening at Goshen school that. He just happened to be there when the screening was going on. 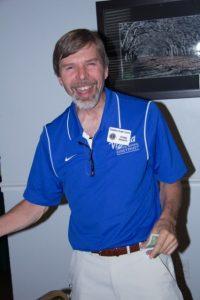 Lion Craig was very happy he had on that Dodger Blue shirt.. not..

Lion Eric was happy because his son was appointed by the governor of Arizona to be the head of education innovation.

Lion Daryl was happy because the city  is cleaning out the Watson ditch near his home. Plus,  now with the new card that the city sent out, he can see how many times a month he can water his dead grass.

Lion John will not be here next week because his son is getting married.

Lion Carol is happy because it’s Friday, and happy to see her co worker Diane Sumpter is here for the program,

Lion Dee saw someone in a white van going to fast, speeding was the term he used, and that white van was being driven by our won Lion Daryl, who  never looked over at Dee, most likely, Dee speculated, because of his excessive speed.

Lion Roy fined himself for totally forgetting to got to the Goshen Vision Screening that he signed up for last week.

Lion Allen fined Lion Eric because you need to get a permit to fix your own fence in this city.

$5. Adel who donated it to Lions eye. 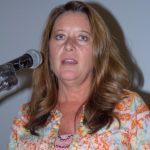 Dianne Sumpter talked about the fourth of July fireworks at mineral King Bowl.

Dianne Sumpter was our speaker today from the Visalia parks and recreation dept. talking about the fireworks celebration at the mineral king bowl. They find the program and this will be the last year for them to be able to do it. They are looking for other groups who may want to take that over. 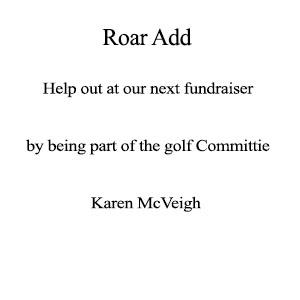 The Roar newsletter for Friday May 2

Lion President Carol lead out meeting today with Lion Bob Line leading us in singing god less America. Our flag salute was led by Lion Tom Link, and Lion Pete lead us in the invocation.

No fine badge was won by Lion Bob Line 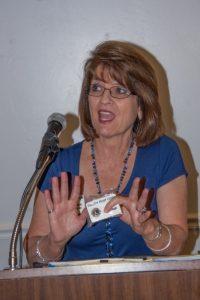 The date for this years officers Installation dinner has been changed  to Friday June 13. It will once again be  at the Vintage Press this year.  Look for your  Invitation in the mail.

Lion President Carol announced that the next board meeting will be May 20th at 11:45 at the Clubhouse Deli.

Next Friday, May 9ths  luncheon will be at our regular Club House location and will  the Melvin Jones award luncheon.  Get there early as signs up’s have already been brisk.

Birthdays this month, just one person is  Lion Dr. Craig Wheaton. We all sang happy birthday just to him.

Lion Jamil announces that he and Lion Ruth will be hosting  a social at his house on May 10. They will be having the tri tip from the Chili Run. Sign up for salads desserts.

Lion Chris brought home  two small bats that from a recent trip to  Dodger Stadium. Both went for $12, one to Lion Roy and one to Lion Ed.  Lion Eric, a well know Giants fan bid up one of the bats just to mess with us Dodger Fans.

Rick McVeigh,  was given his Lions pin today and is now Lion Rick McVeigh. He is Lion Karen’s husband so the list of husband and wife members is growing.  He has been retired for about six weeks. 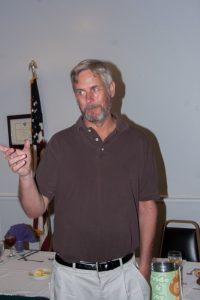 Lion Chris was happy because  last week got to go see the dodgers play, and win. It was his sons 8th birthday.

Lion Tom Link was $5 happy that Hurley school, where his daughter teaches and his wife volunteers, is the only school in Tulare county that got the  distinguished school award.

Lion Jamil was happy that we have a new lion member.

Lion Ed was happy because on Sunday he was going on the Happy Hearts motorcycle ride, raising money for Children’s hospital Central California.

Lion Dee was happy that the Giant are in first place,

Lion Eric was happy that he can be called a creep by lion Bob and still feel good about it.

Lion Bob Line was happy because his son in law, Pete, who had picked up two sets of tickets by accident as he came into the club today,  put back one set.  Bob thought that his good character had rubbed off on Pete after all these years, even with Pete being a lawyer.

Lion Pete was happy because the Oakland As  and the Golden State Warriors are doing good.

Lion Carol was happy she is going to Cayucos  for the convention, and happy because today is Friday.

Lion Jamil fined Lion Dee because he was delaying the lunch line.

Lion Craig had to fine himself because he was in charge of getting a program for today and  forgot. So he got the job of being the program.

Lion Chris: Only Lion Tom Link did not shake his hand.

$5. New guy Lion Rick.. Under pressure from the club, He gave the money to the lions eye. 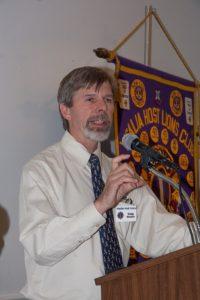 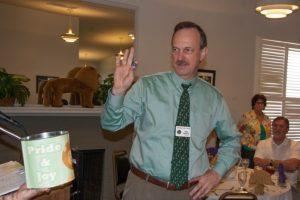 Lion Pete drew for the lucky marble this week but came up with a blue one and thus no winner.

Lion Craig became our program today because he forgot to get the program. He covered the state of Visalia Unified, going over some of the programs that were new, and one that was cutting edge in education.