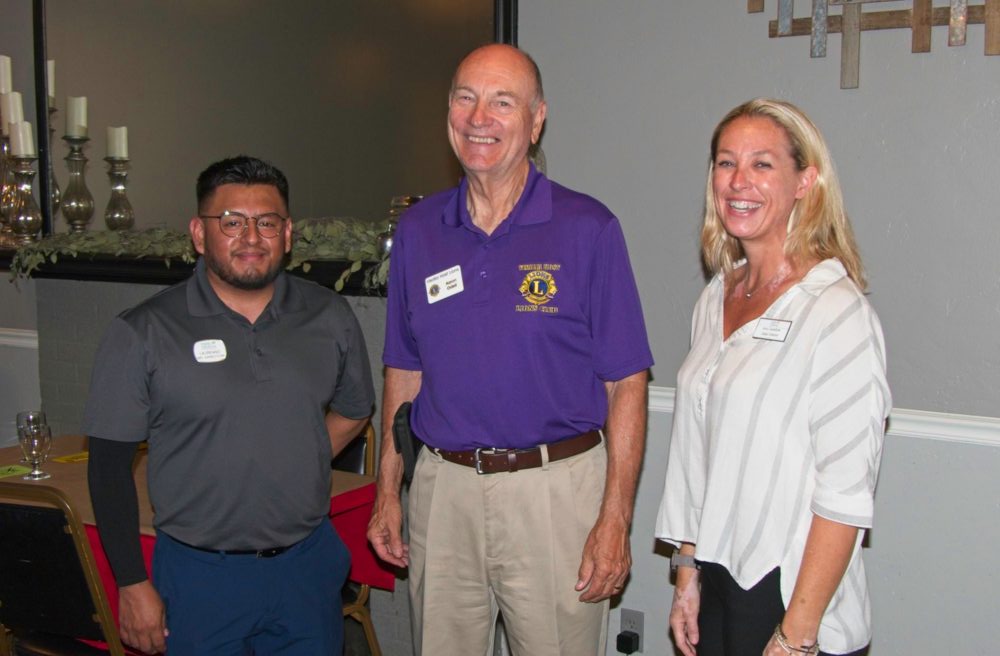 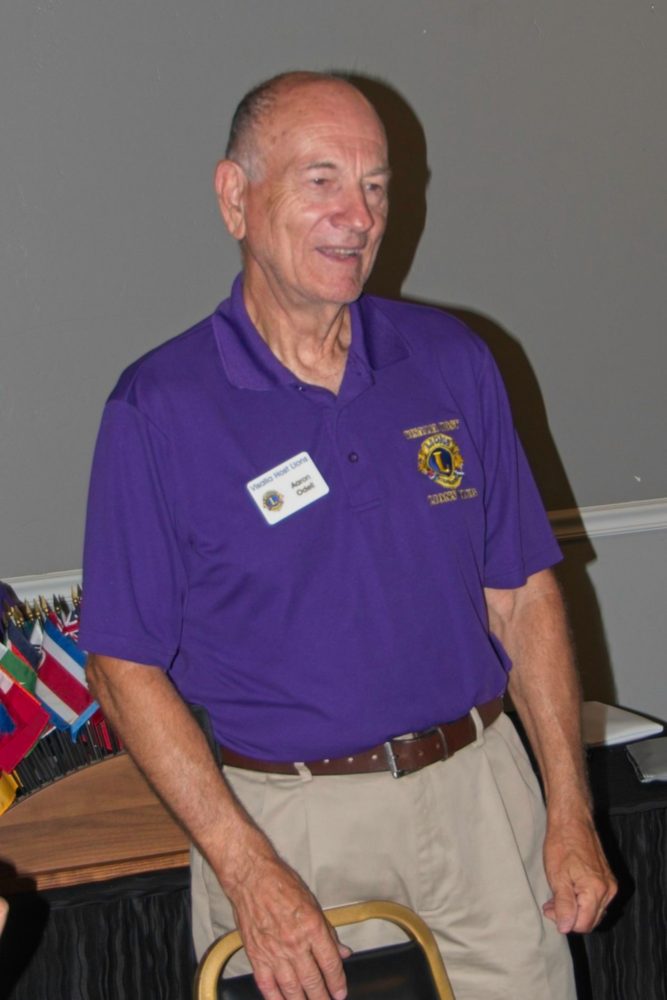 Lion president Aaron leads the meeting for the last time as president, next week he becomes part of the audience as Lions Tony takes office. 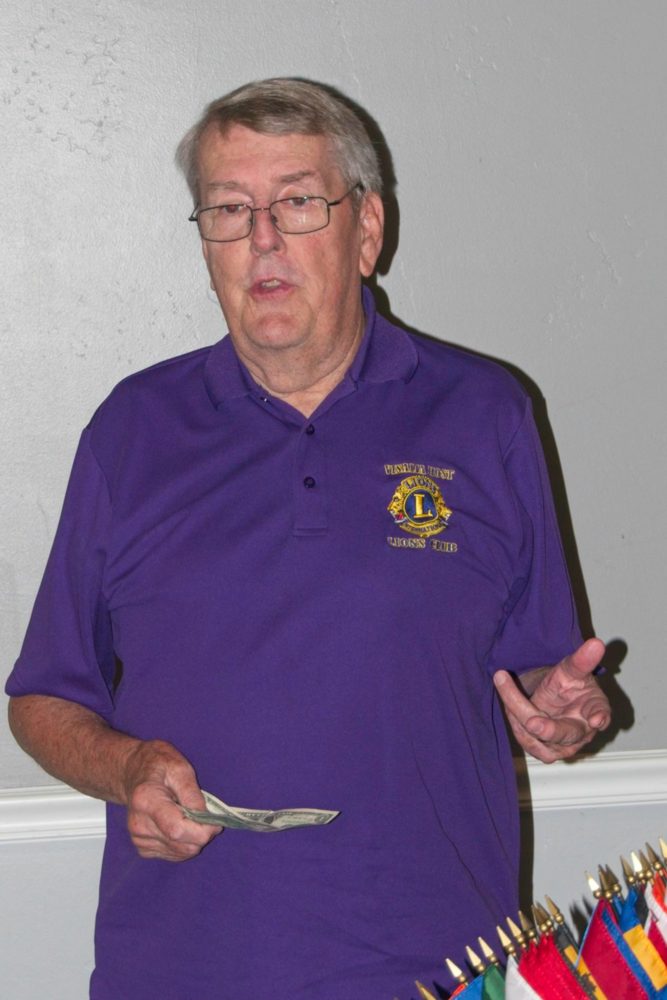 Our meeting today: Lion Aaron lead the meeting today, the last time as president, and called on Lion Betty to lead the flag salute, Lion Bob Line to lead us in singing God Bless America and Lion Aaron did the invocation himself.

Lion Pete was happy he had a great trip to France, but he did not bring anything home to auction off, so he donated $20. He was also happy that Lion Aaron had done such a good job as president this past year and thanked him for all his hard work.

Lion president Aaron was happy for the year we had had, for all the new members, and for all the help he has received from club members. He looks forward to another great year with Lion Tony as president.

Lion Roy was happy the Dodgers were in first place and happy for the good year the club has had with Aaron at the helm.

Lion Karen had a happy buck for Lions Aaron’s year and was happy that Elaine will be joining as a new member.

Lion Dennis, who was able to make a lunch meeting as he was on vacation, was happy he did not have to wear a tie as he did last night at the installation dinner. 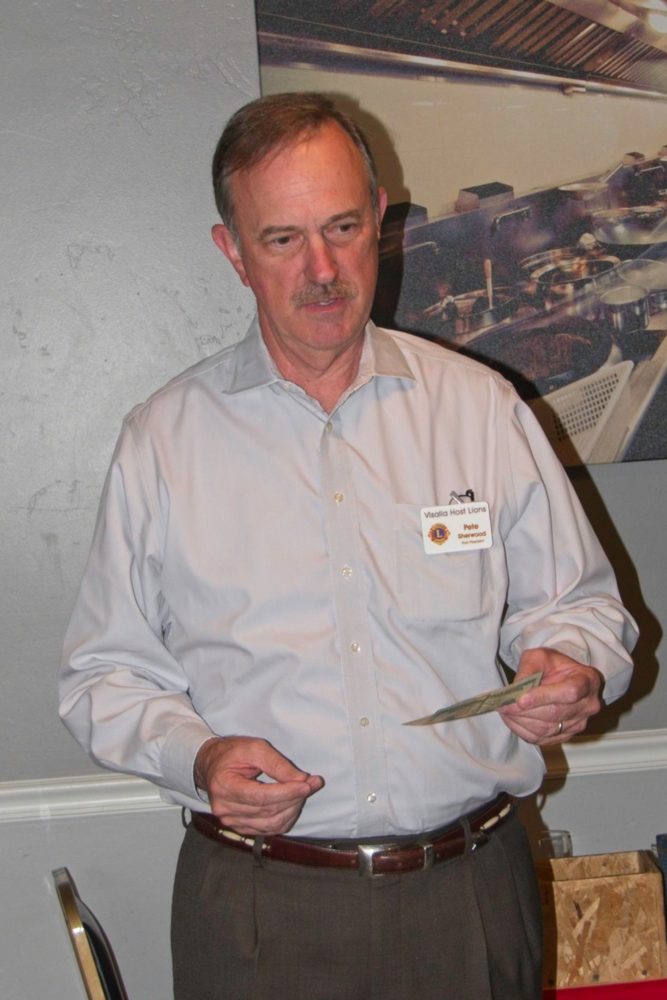 Lion Pete had just returned from three weeks in France and said his memories were of cheese, wine, Croissants and Baguettes. 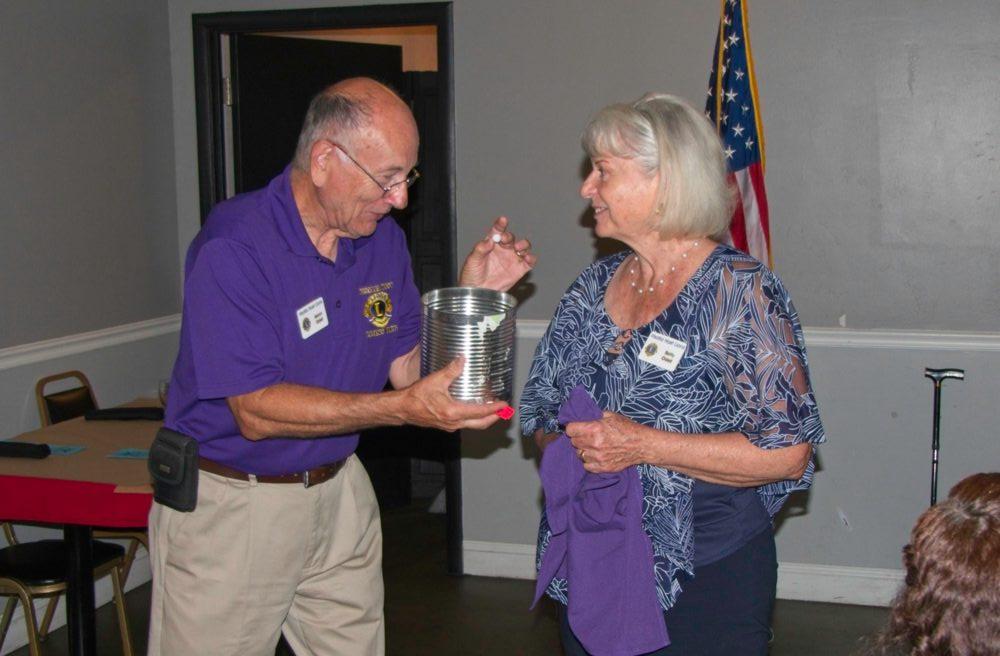 Lion president Aaron shows his wife Lion Betty that there is a white marble in the can. She tried for it but came up with another color that netted her zilch.

$5: Lion Pete won and donated it to the Lion Eye Foundation.

Today’s program was presented by Amy and Laureaho from park Visalia assisted living home on Walnut. They talked about the care available at their facility, which includes a memory care wing for dementia and Alzheimer’s patients.

Amy and Laureaho from park Visalia with Lion President Aaron.

The Free Add went to Lion Bob Bricker this week. 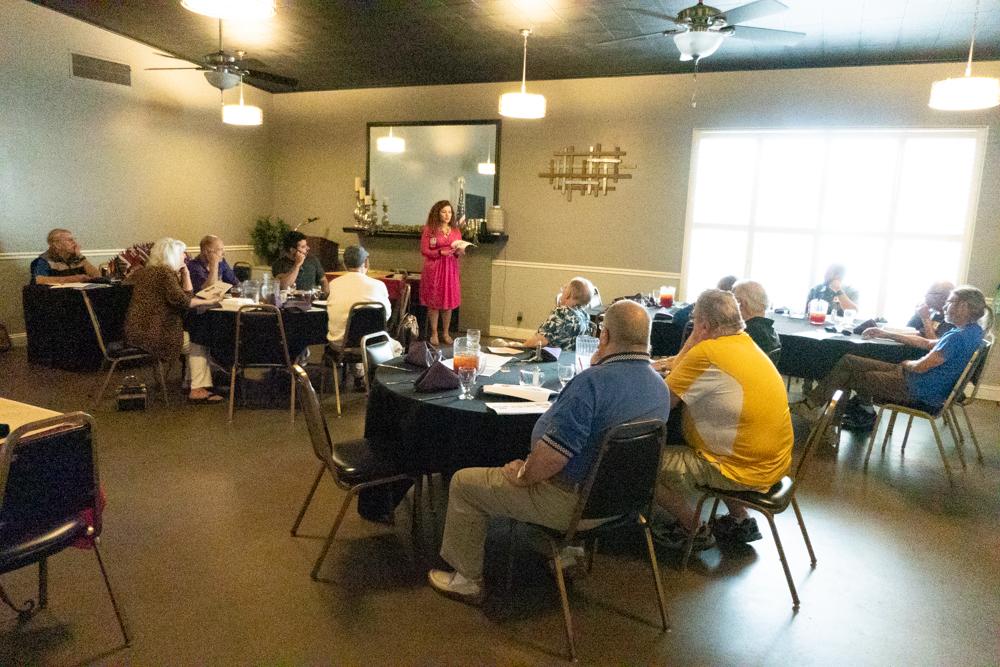 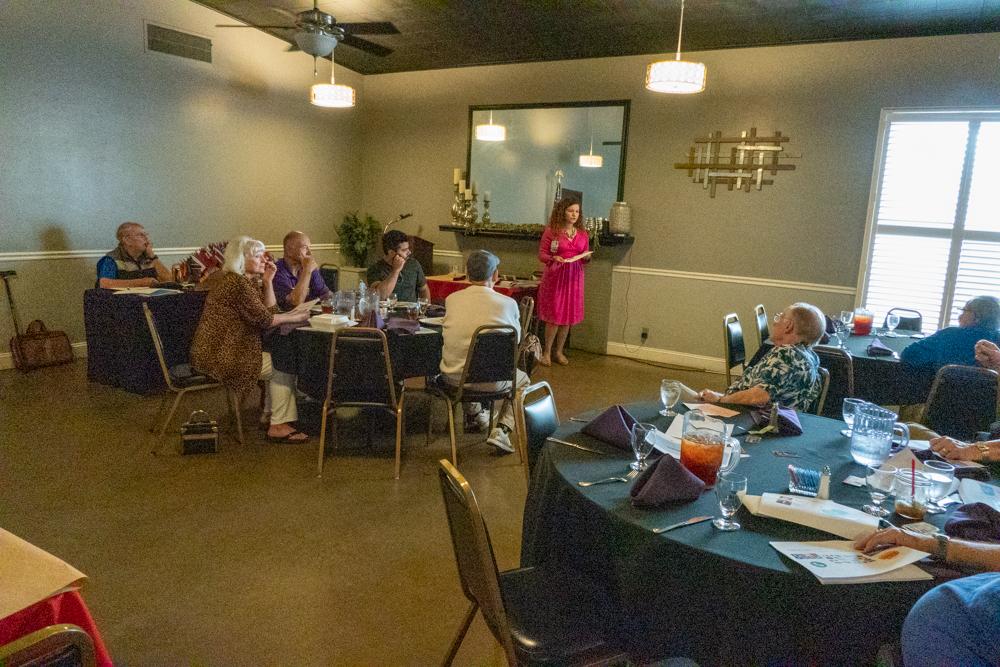 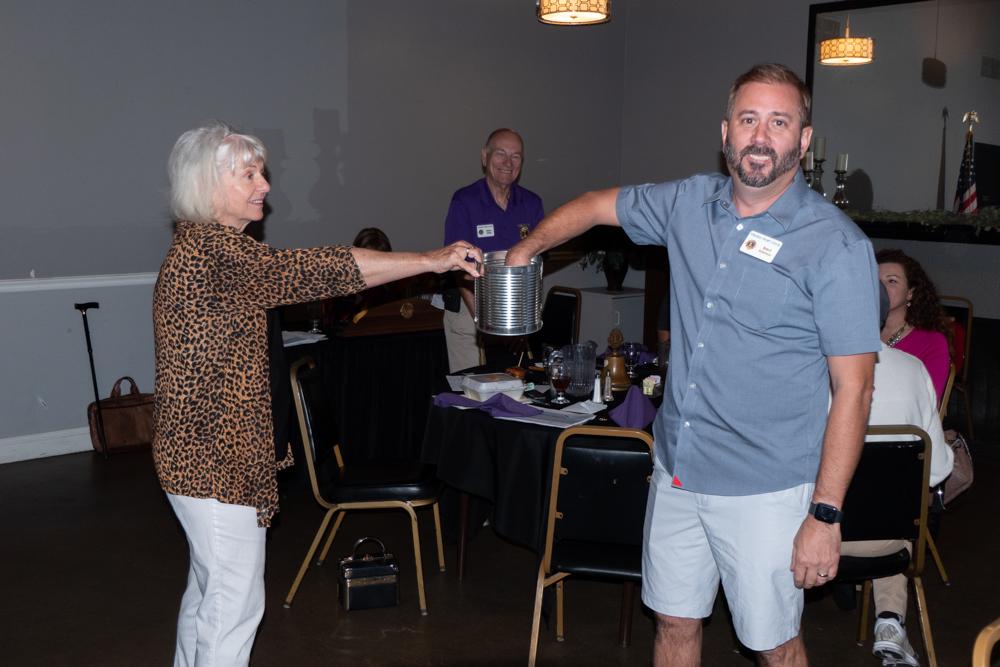 Announcements: Lion Steve read the slate of new officers for the 2022-23 year and a vote was taken. The club voted unanimously to accept the officers as announced (what a shock)

No fine Badge went to Lion Bob Line. The club is now considering taking out a loan to cover the shortfall.

Lion Allen had been to Anaheim to watch the Redsox play the Angeles, he went to Bubba Gumps while he was there and picked up a bottle of Cajun hot sauce which he auctioned off.  Lion brent purchased it for $8.

Lion Brent had been to Puerto Vallarta Mexico and the Bay Area since his last visit to the club but also didn’t bring back anything to auction off so he gave $20.

Lion Miriam was happy her dad was visiting us from LA. She was also happy that she got a bunch of glasses from Kaweah Health to give to the Lions.

Lion Dee was happy that finally, after six months, he has a date for back surgery. One bad thing about that is that it’s this coming Thursday the 23rd, so he will have to miss the installation dinner.

Lion Pat was $20 happy that three of his nieces are in town.

Lion Karen was happy the Giants swept the Dodgers the past weekend.

Lion Alan was happy that he got to go watch the RedSox in Anaheim with his son and daughter. He was also happy that he was going to Vegas next week with his other son and his daughter.

Lion Roy was happy that Little league was finished for the year in Farmersville, as his grandson had been playing to the Giants. He was also happy that his favorite horror film, John Carpenters’ The Thing was in theaters this coming week, for the 40th anniversary.

Lion Dee fined Tom Link because several years ago they had an agreement to take each other to lunch on their birthday, and at Colimas the owner had given them a free lunch when Dee had been the one to pay, now the owner offered the same deal to Tom.

Lion Dee also fined Lion Pat because Pat’s freezer recently when out on him and instead of giving away all the meat that was in it, Pat let it go bad.

Lion Craig was our greater today and he was able to get money from all of one table and Lion Roy. 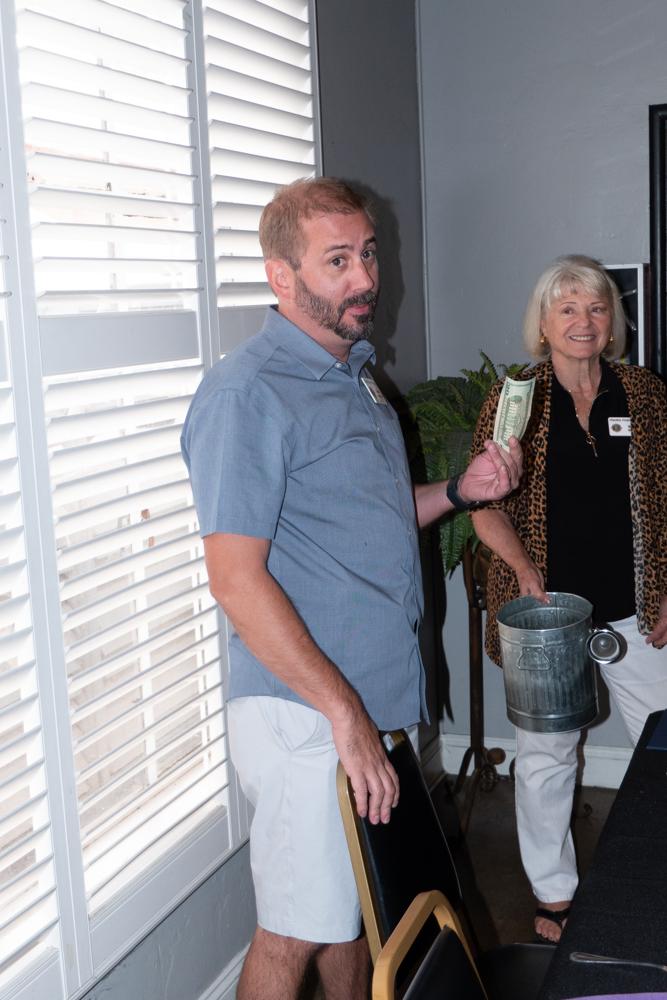 Lion Brent with a happy $20 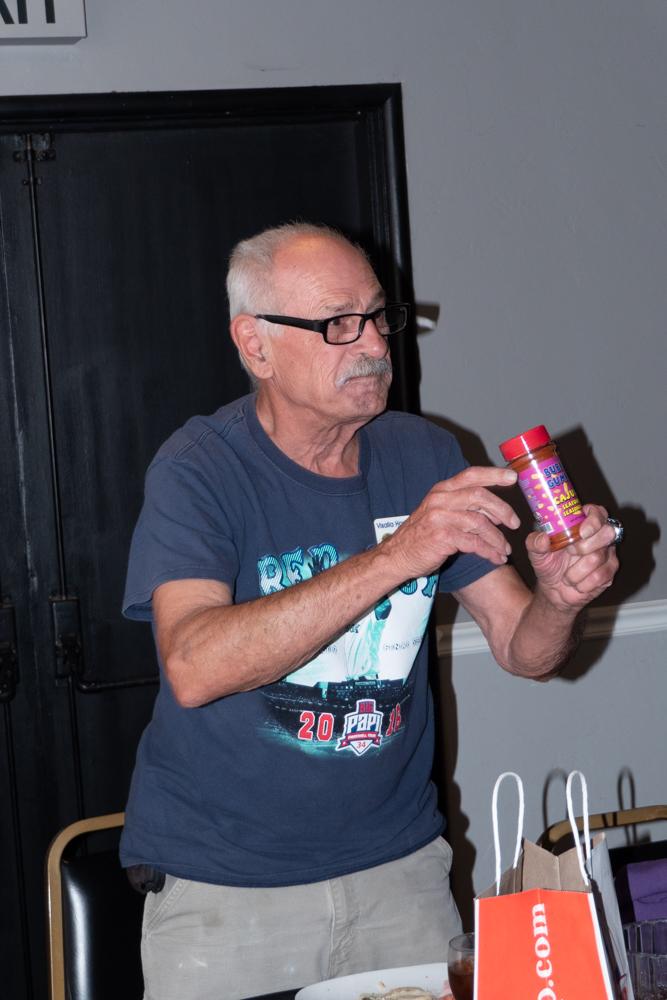 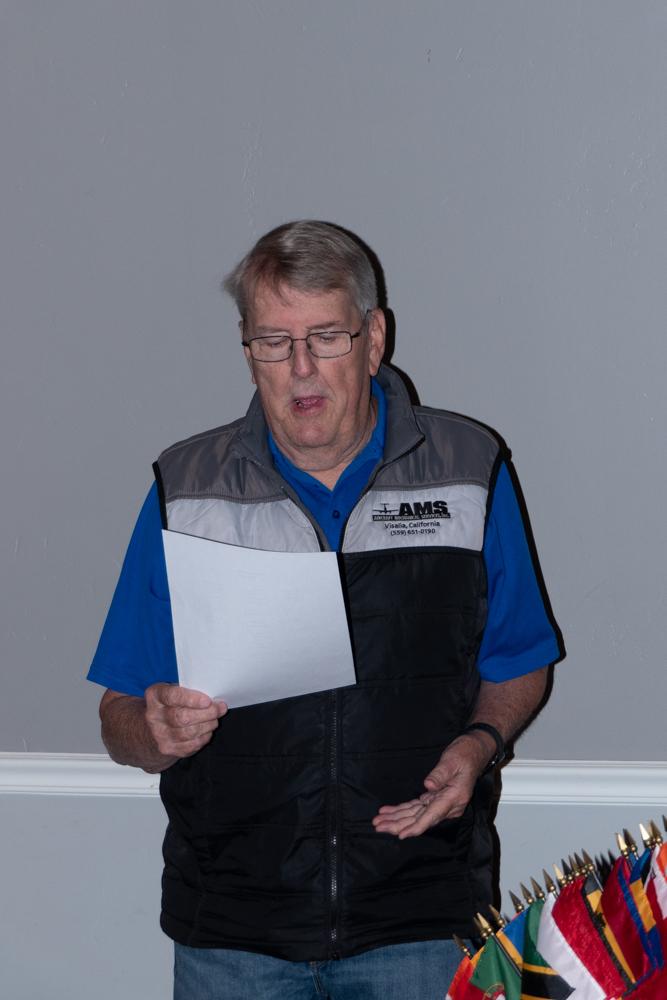 Lion Steve reads the final names of next year’s slate of officers.

$5 drawing went to Lion Tom Link and he donated it to the eye foundation.

The Marble drawing, as you can see in one of the photos at the top of the page went to Lion Brent.

Our own Lion Miriam was the program today. She is employed by Kaweah Health as a patient experience manager. She is one of two people who help with the experience patients have when they interact with the hospital. Much of what she does is take complaints and work through them to help make sure that the same situation doesn’t happen again. 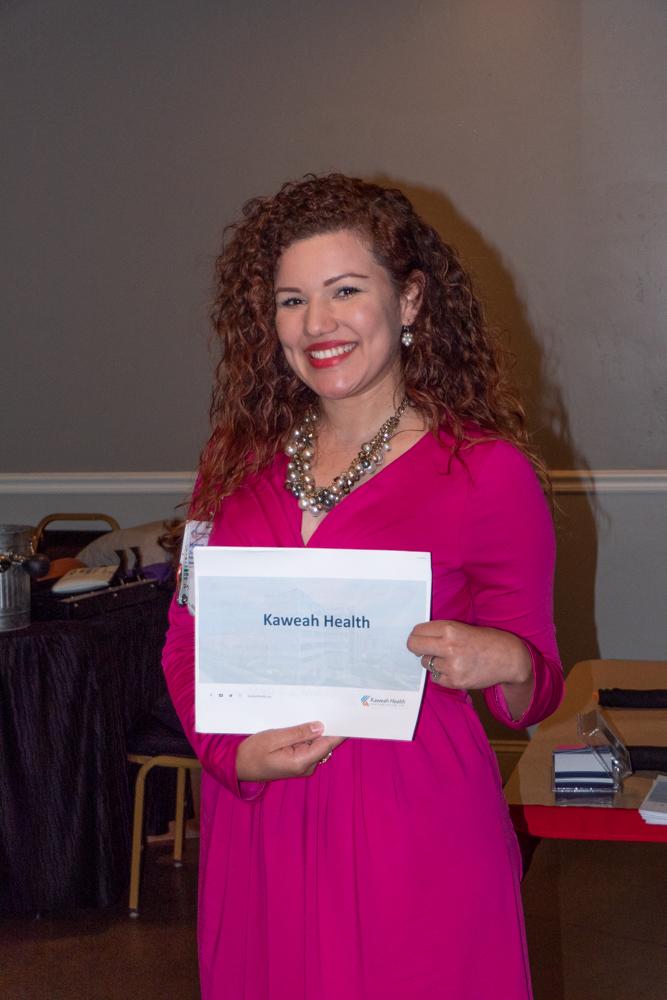 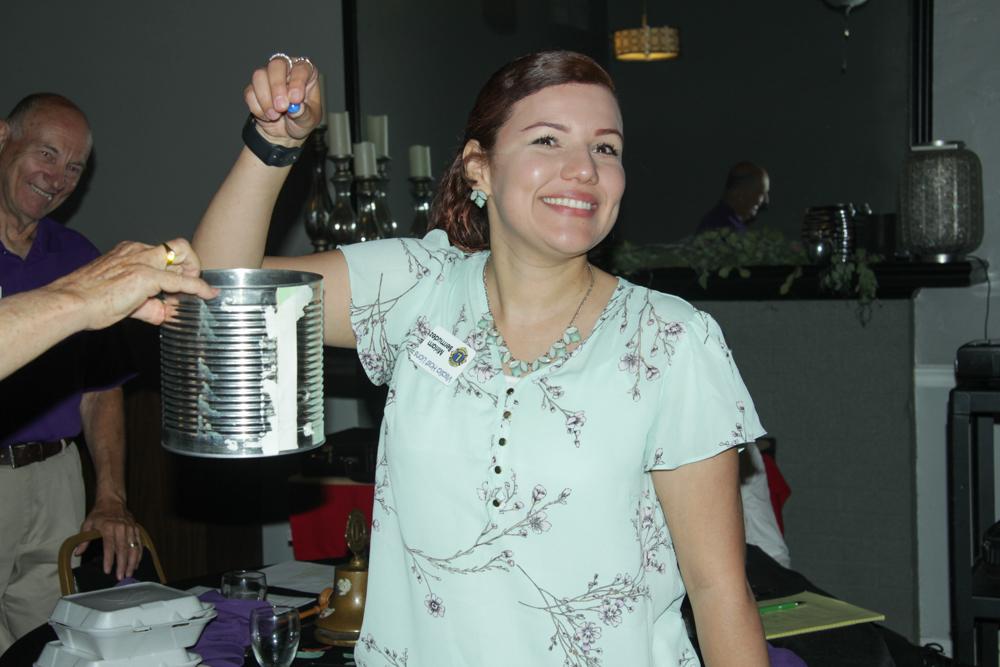 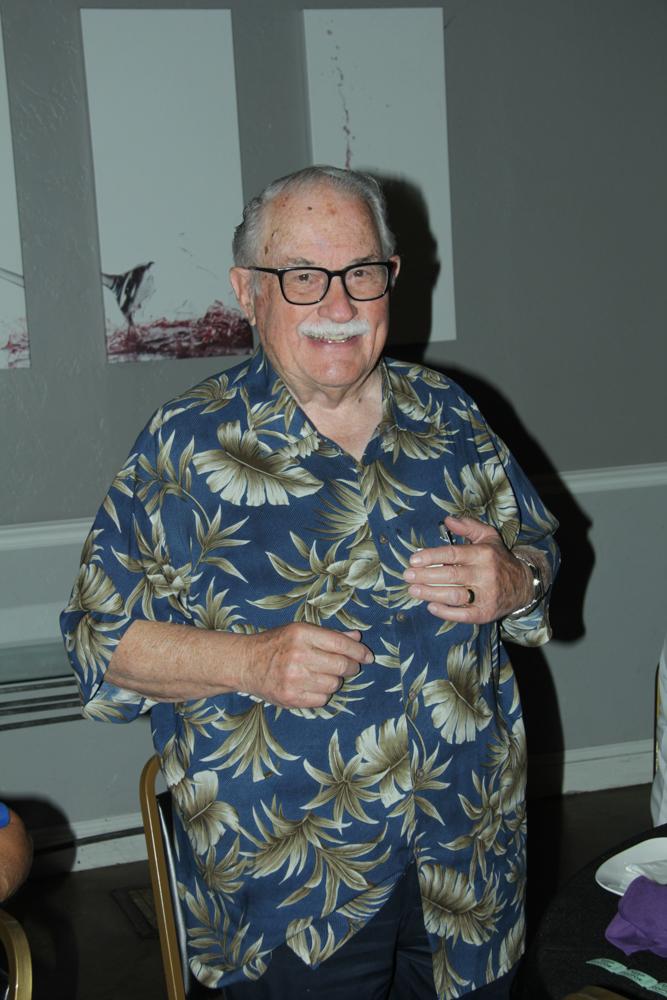 Lion Bob had a couple of happy bucks today. 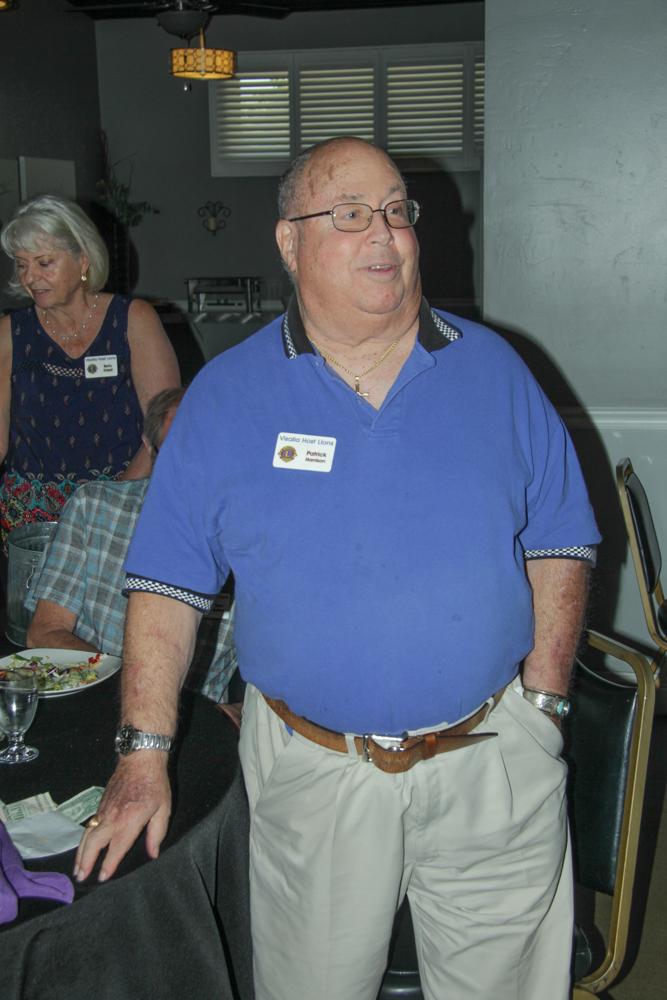 Lion Pat also had a couple of happy bucks.

Lion president Aaron, heading down the home stretch of his presidency, lead the meeting today and called on Lion Roy to lead us in saluting the flag, Lion Pat for our song, and Lion Aaron did the invocation himself.

New Lion Miriam was the secret greater and was able to avoid several people and earn the club some much-needed cash.

June 23, 5:00 PM Vintage Press: Installation dinner to install our new slate of officers. 5-6 Happy hour, dinner starts at 6. The cost has gone up a little to $30 for Lions Members and $40 for guests.

Lion Vicki has recently had a small stroke but Lion Steve reports that she is doing very well. We wish her well and hope to see her at our meetings soon. In Fact. Lion Tony was keeping Vicki’s seat warm for her at today’s meeting.

Lion Pat was $5 happy that he had relatives coming into town from all over the world.

Lion Bob Line was happy that his daughter Jody was voted women of the year on Thursday evening at the chamber awards, and a happy buck because his grandson will be the new head baseball coach at El Demonte.

Lion Tom Gaebe was happy to be back at club.

Lion Rich Manley was happy to be here.

Lion Roy was happy we have a slate of officers for next year.

Lion Karen was happy to see Tom Gaebe back with us and also happy for the slate of officers.

Lion Tony fined himself for having to leave early.

Lion Karen fined Lion Roy for leaving the building at the last meeting with the no fine badge still around his neck. (hay, I was hoping it would work out in the real world)

$5 went to Lion Pat who donated it to the eye foundation.

Lotto tickets went to Lion Roy, and I won $12 so I will owe a little next week.

Lion Miriam (also known as MJ)   drew for the coveted yellow marble ( we could not find the white one)  but came up with some other color that did not net her anything except another mention in this newsletter.

Fellow Lion Richard Manley of the Sequoia Lions Club gave us an informative talk about NASA and what the space program has brought down to earth that we use every day. From cell phones to MRIs. Rich worked at NASA during the Apollo program. 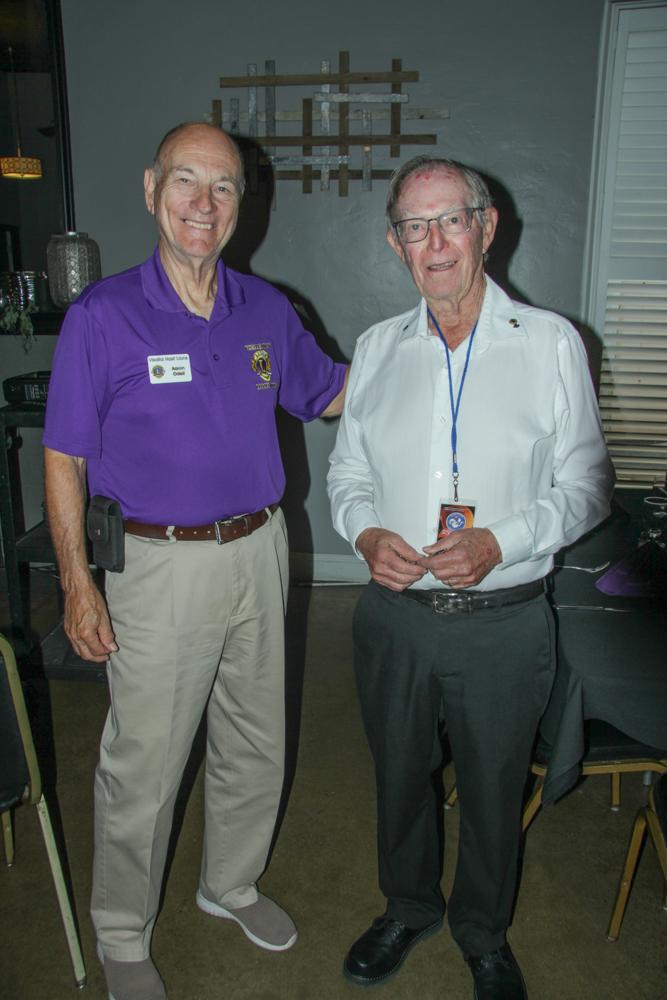 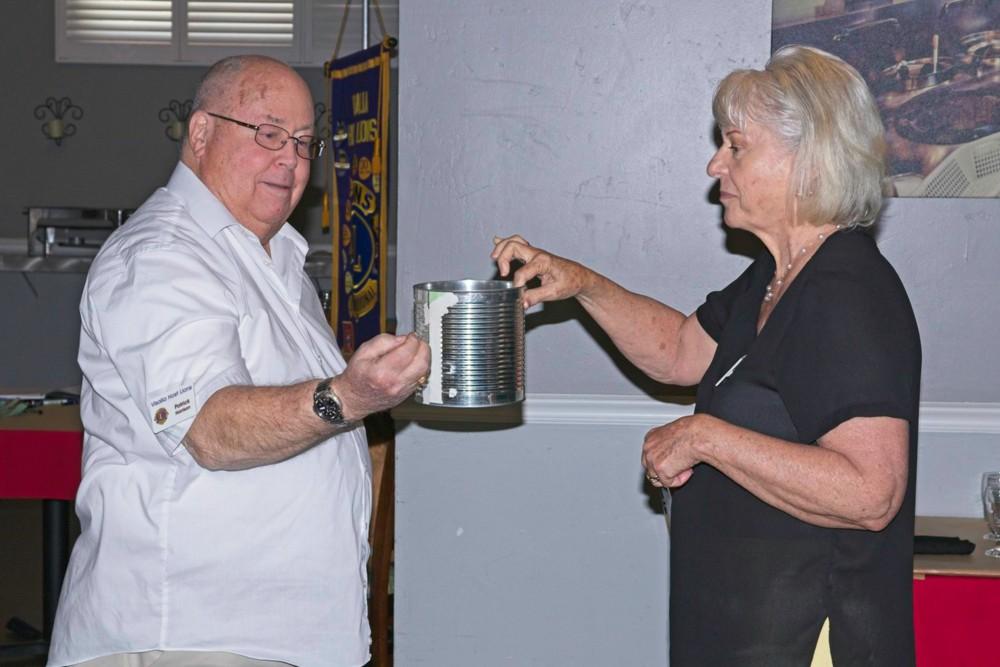 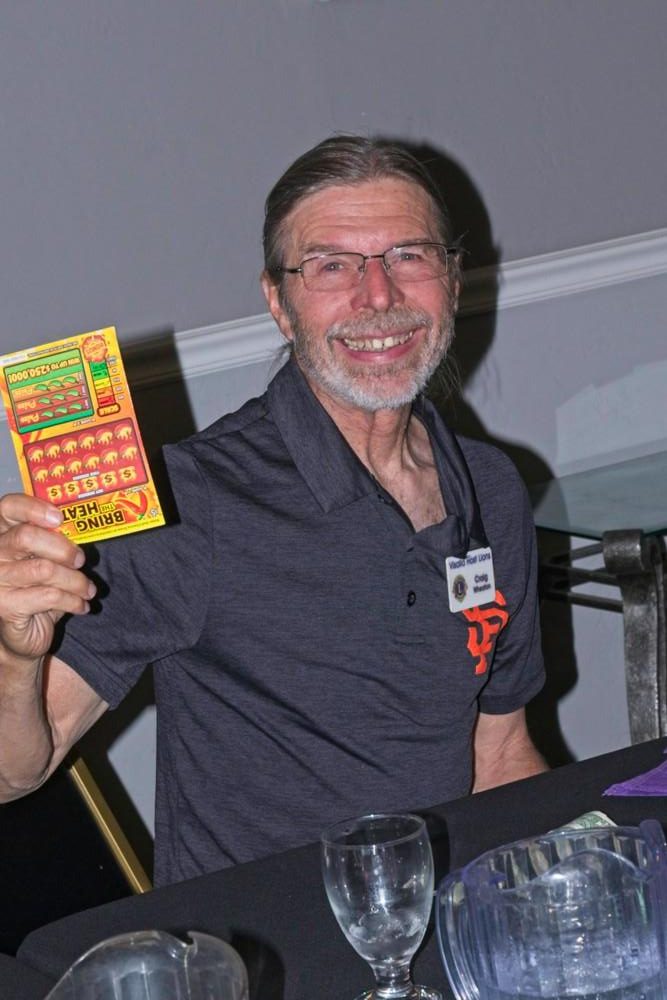 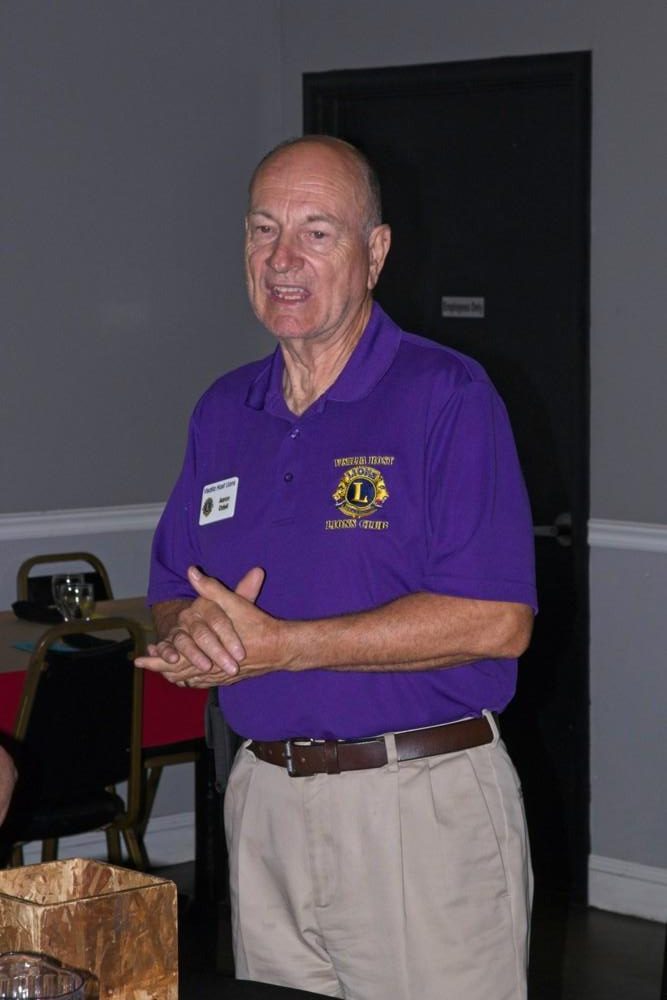 Lion president Aaron lead the meeting today, beginning the last month of his presidency.  He called on Lion Karen to lead us in saluting the flag, Lion Tom Link to lead us in singing My Country Tis of Thee, and Lion Dee to do the invocation.

Lion Allen was the secret greater and was able to avoid several people and earn the club some much-needed cash. Many were heard to say that it was well worth the dollar.

Our monthly board meeting will be this coming Wednesday the 8th at 5:30 at Quail Park Shannon Ranch. New members take note: We have board meetings on the second Wednesday of each month and you are welcome to attend. When you do, you will get to turn your badge right side up and get a better idea of what our club does. If you do decide to attend please let Lion Aaron know by calling or texting him at 408-568-2533, also we eat dinner at the board meetings and you will need to contact Leslie (leslieh@qpshannonranch.com)  at Shannon Ranch and give her your selection. See a PDF of the menu:

June 23: Installation dinner at the Vintage press. the new slate of offices will be inducted. Cost is just $30 for Lions Members and $40 for guests. Contact Lion Aaron (408-568-2533) and let him know how many will be attending.

Lion Pat was $20 happy that Lions Aaron and Betty brought all the “equipment” to Shannon Ranch for the evening meeting last week, saving him a lot of work.

Lion Dee was happy that his brother and his brother’s new wife came to town to visit him and his wife this week, though he was not happy that both the wives got sick.

Lion Craig was $5 happy that everything listened to his program at the last meeting.

Lion Roy was happy that the temps would be in the 80s for the outdoor wedding he is photographing on Saturday and the following weekend, when the temps will be over 100, his wedding will be inside at the Windham.

Lion Tom Link was glad he will be at his house in Moro Bay next weekend where the temps will be much cooler. He was also happy that he got a par on one hole in his morning golf game.

Lion Pat was also happy that he was having a birthday party at his house and his neese from Germany will be in attendance.

Lion Craig had another happy buck because he got to give the commencement address at a charter school graduation this past week.

Lion Aaron was happy that Jeremy Schultz was our program today. He stepped in at the last moment when our scheduled speaker couldn’t make it. He was also happy that the British Open was going on and there were some great tennis matches to watch.

Lion Allen was happy that next weekend he was making his annual trek to watch the Red Sox play the Angles in Anaheim with his kids. It will make the 20th year he has gone.

Lion Roy fined himself, even though he had the no fine badge because he had to leave early.

Karen also finded herself because she also had to leave early.

$5 was won by Lion Allen, who donated it to the eye foundation.

Lion Pat drew for the coveted white marble and this time came up with the winning white marble. He donated it to the eye foundation.

Jeremy Schultz, founder, and CEO of 1852 Visalia was our program today. 1852 Visalia brings indoor street style soccer and brewery to Visalia. You can read more about it on their website 1852Visalia. 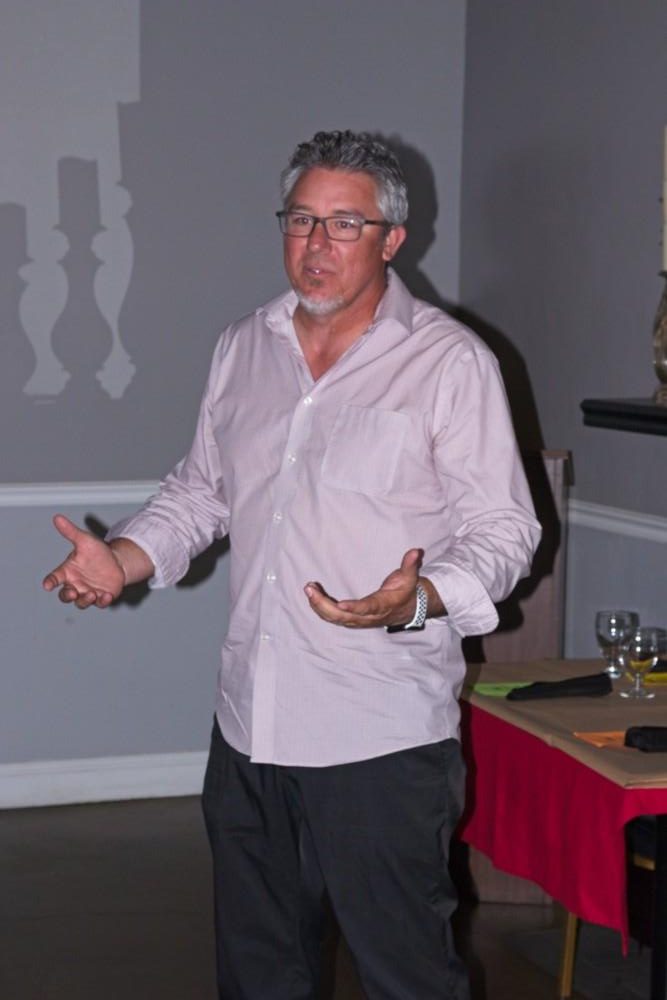 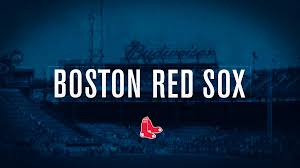 Lion Allen won the Free Add this week and will be going to see the Sox play the Angeles next weekend.