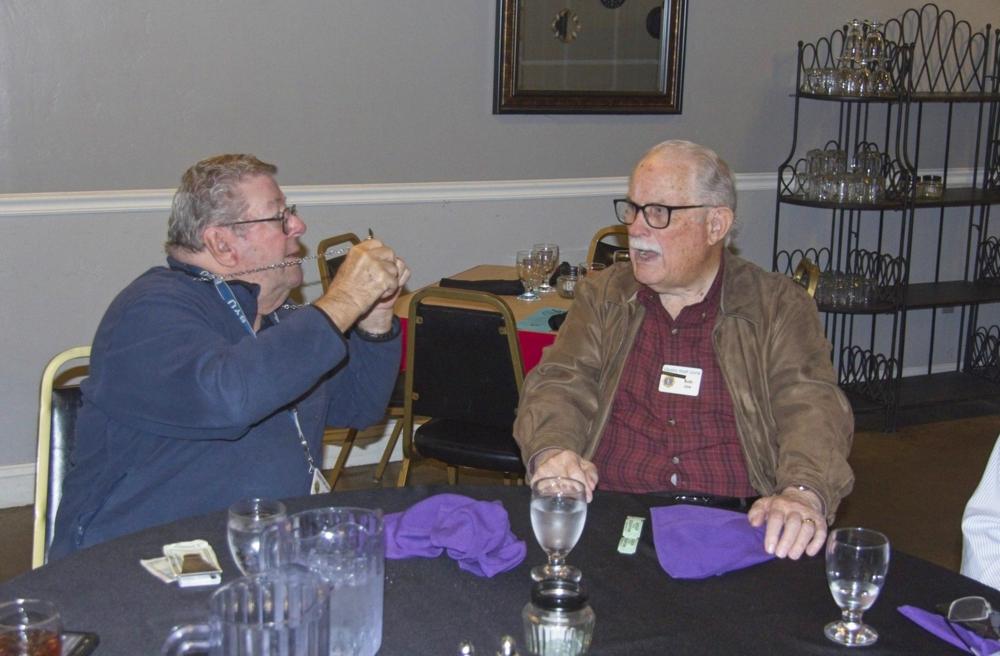 Lion Dee makes it clear to Lion Bob that he can not be fined. 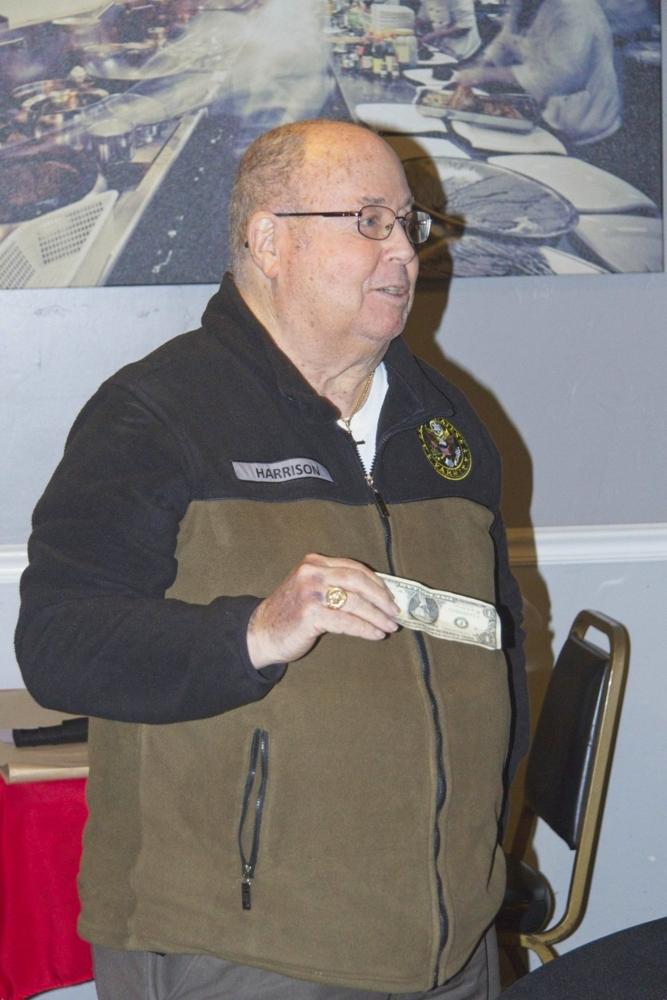 Lion President Tony led the meeting today and called on Lion Steve to lead us in saluting the flag, Lion Pat to lead us in singing America the Beautiful, and Lion Bob Line to do the invocation.

No fine badge: Went to Lion Dee once again this week (same guy every week)

Lion Dee was the secret greater and was able to avoid several people and earn the club some much-needed cash, including Lion Bob Line, who was sitting right beside him.

Today we had one of the youngest guests we have ever had, Lion Karen’s granddaughter Emmie Lue, two months old.

Our Christmas Party is next Friday, the 16th, at our regular meeting location, Left of Center. Please bring an unwrapped toy for a boy and a girl with a value of at least $400 (just kidding, that should be $10). Reps from Visalia Emergency Aid counsel will be there to receive the toys and our donation check. Also, Lions Dee’s group, Some Assembly Required, will be our entertainment this year.

Lion Allen announced that Visalia Post Acute (formally Redwood Springs) had changed the date of their Christmas party to Wednesday, December 21st, at 10 AM; we donated $500 for gifts for all the residents. If you can make it, please join us that day. We will help pass out the gifts. Their address is 1925 E Houston Ave.

Lion Tom Link read a thank you note from Huston School thanking us for the help we have to give them to meet their attendance goals. Last year they had an 85% attendance rate, ranking them just about at the bottom of schools in Visalia; this year, it went to 93% and a ranking of 8th. A great achievement.

Young Life has set a date for their annual banquet for February 24th; our club has purchased a table, so anyone who wants to attend, let president Tony know.

Lion Pete recently returned from Hawaii and had not brought anything back to auction off, so he gave $20.

Lion Pat was happy because last week he went to Dan Demis for a concert by a group called Masters of Harmony, and while he was there, he got to see his three-month-old granddaughter for the first time.

Lion Pete was happy to have been in Hawaii for the past week and was happy that he did not see any sharks on a beach where he had been swimming a couple of days before a reported shark attack. Pete chalked it up to the shark’s professional courtesy that it did not attack him.

Lion Roy was happy that his move out of his Photography studio was progressing smoothly.

Lion Pat was happy about the rain because his irrigation system had been on the frits, but the rain took care of that problem.

Lion Leigh was happy that after six weeks of tests, doctors told him he had a heart, and it’s in tip-top shape.

Lion Tom Link was happy that he was leaving for Moro Bay after our meeting.

Lion Pat fined himself because he had signed up for the Parade and almost made it.

Lion Allen fined Lion Miriam for not singing during the song, but she denied it.

Lion Bob Line tried to fine Lion Dee, sitting right next to him, but Lion Dee reminded him that he had the no fine badge.

$5 winner: Bob Bricker, who, after some prodding, donated it to the Lions eye foundation.

Marble drawing: Lion Tom Link did not win the $25 in the pot today because Lion Dee won it last week.

We had no program today, so we got up and left the building. 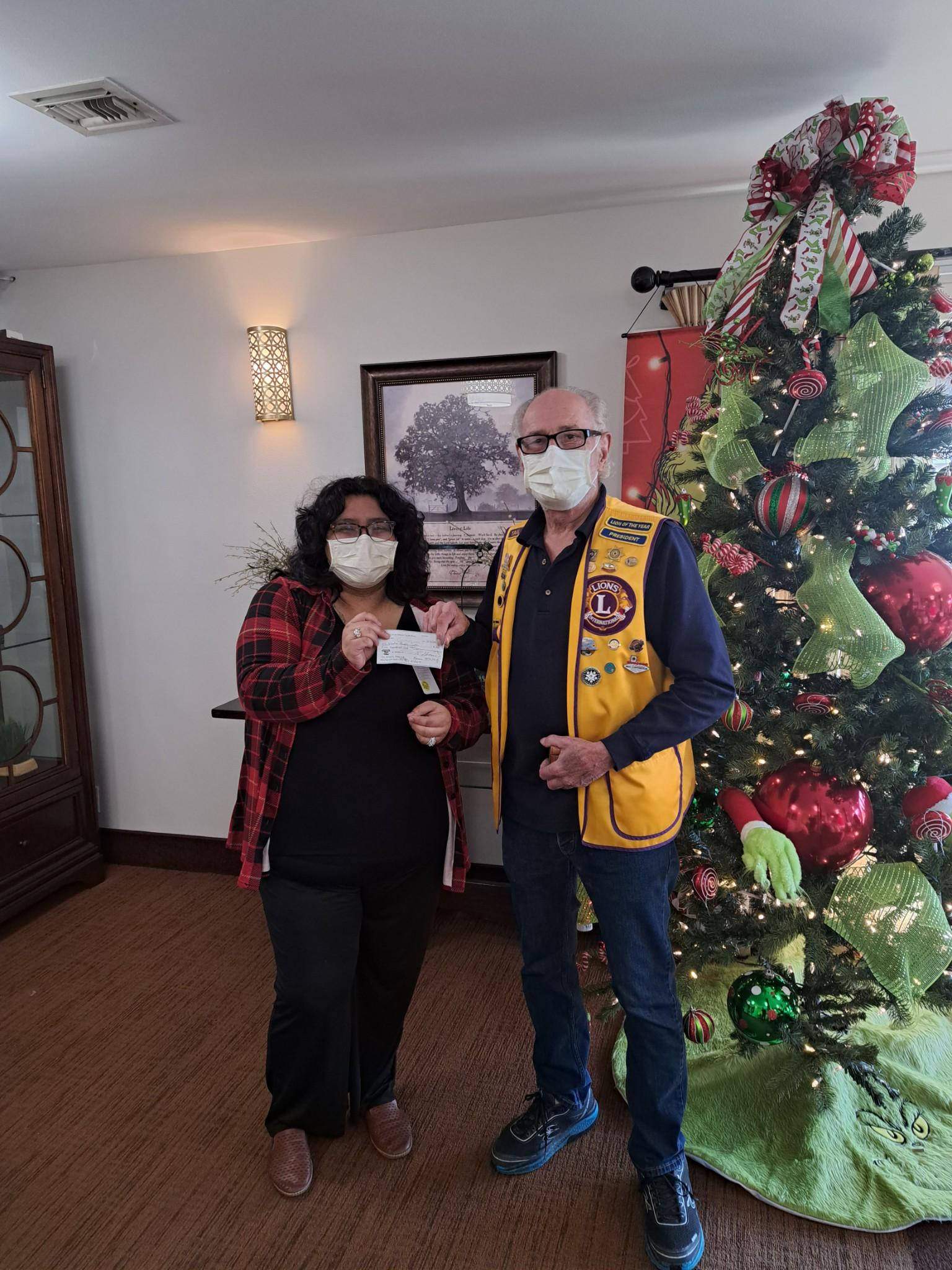 Lion Allen presents our check for $500 to Visalia Post Acute to buy Christmas gifts for all the residents. Their Christmas party will be on Wednesday, December 21st, at 10 AM; the address is 1925 E Houston Ave. Hope to see you there. 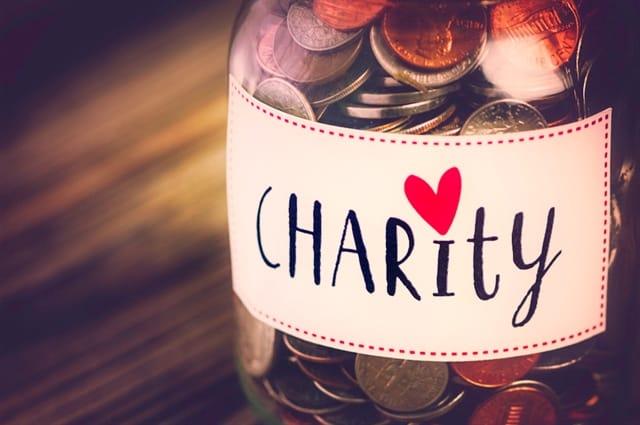 Lion Steve won the Free Add this and wanted to remind us all to give to the charity of our choice.