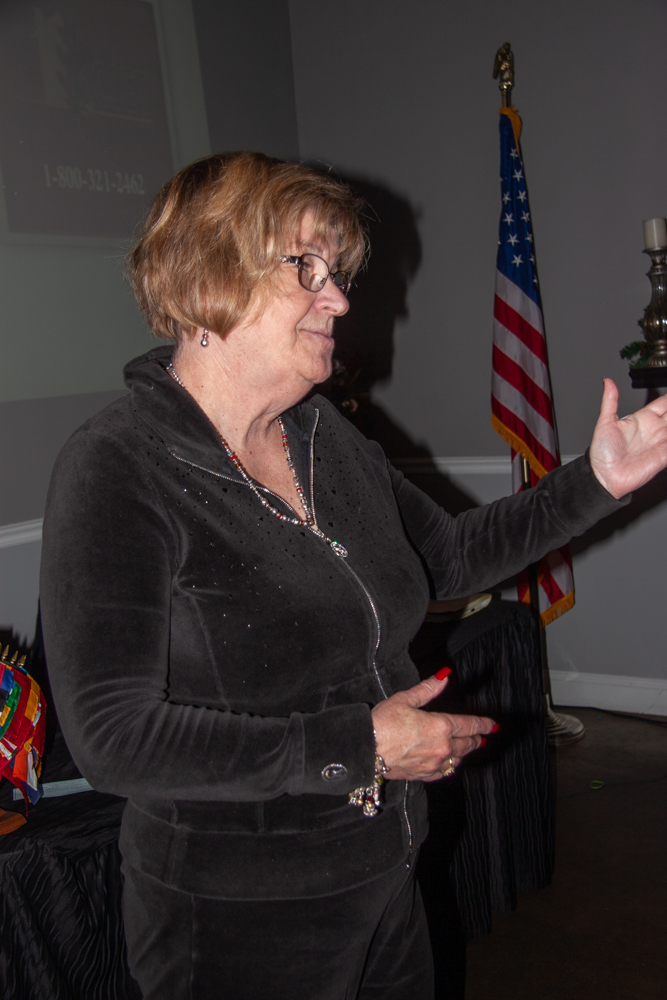 Lion Tony Loliva’s wife Nancy was one of our guests today. Introducing our speaker Albert Cendejas from CSET.

Our president, Lion Ruth lead our meeting today and after calling on Lion Bob Line to do the song she called on Lion Jeff to lead us in the pledge and Lion Ed to say a prayer.

Lion Allen announced that the Redwood Springs annual gift giveaway would be this (Friday) afternoon at 3:00. (more about this below)

Lion Craig announced that there will be no meeting next Friday because of the holidays.

President Ruth had a cup she had purchased on a recent trip to San Diego and it went to Lion Melinda for $11, even though Lion Jeff bid heavily on it because he was raised in San Diego.

Lion Craig was happy that our local mountains have been getting some good snow and he has been able to go skying five days in the last week.

Lion Carol was happy she was spending Christmas early this year with her daughter’s family and she was especially happy because she was not going to be the cook. The first time in many years.

Lion Ed was happy that Lion Carol was bringing a big tray of cookies because he would then be assured of something good to eat on Christmas day.

Lion George was happy that his family, all three daughters and their families, would be in town to be with him.

Lion Melinda was happy that she didn’t have a lot of shopping to do this holiday season.

Our president, Lion Ruth was $10 happy because she loves all of us in this great club, and for Amazon, which mad this holiday much easier.

Lion Steve was happy because of his granddaughter, who is in the Air Force will not be set back too much because she got Mono. She will be able to begin a class she was taking once she is well again.

Lion Bob Line had a dollar to be able to tell this joke. An old codger goes into a diner and asks the server for an “almost chicken sandwich” The waiter replies, “an almost chicken sandwich, what in heavens name is that” The old codger replies, “well my young man, it’s what my generation calls an egg sandwich”. Grones were echoing throughout the members as Bob took his seat.

Lion Vickie fined Lion Top for a remark about being crazy that was made earlier in the meeting.

Lion Melinda fined herself for not being at last week’s meeting, some poor excuse having to do with having surgery on her knee.

Lion Allen fined himself for not being able to be at the meeting in two weeks, another poor excuse, he was going to his second home, Vegas.

Fines for not having their badge on were levied against Lion Bob Line, Lion George, and lion Craig. 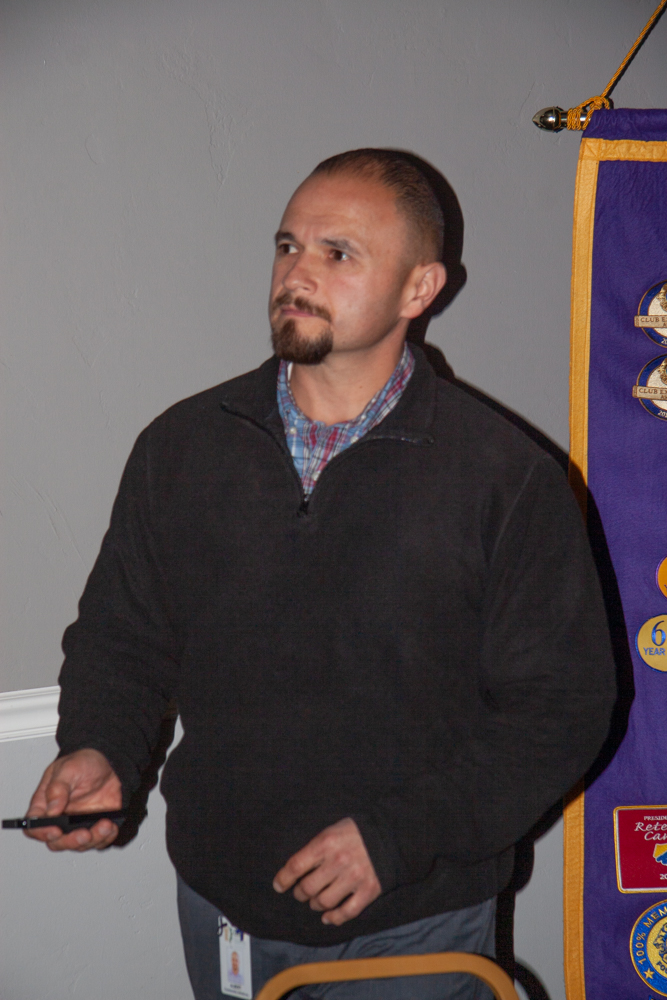 Our program today was presented by Albert Cendejas from CSET, community services employment training. His talk was about what CSET does for seniors, and since everyone in the room could be in that clarification it was topical and informative. Albert was a good speaker and was passionate about what he does. To get more information just check out the Kings Tulare Area Agency on Aging, www.ktaaa.org  and www.cset.org

Our Redwood Springs gift give away was smaller then it has been in the past but those that did attend were no less appreciative of the gift that our club has purchased for the people who live there. A note: We give the home a donation of $500 each year and they go and buy presents for the residents with that money. Lion’s  Allen, Roy, and Janet attended the giveaway. 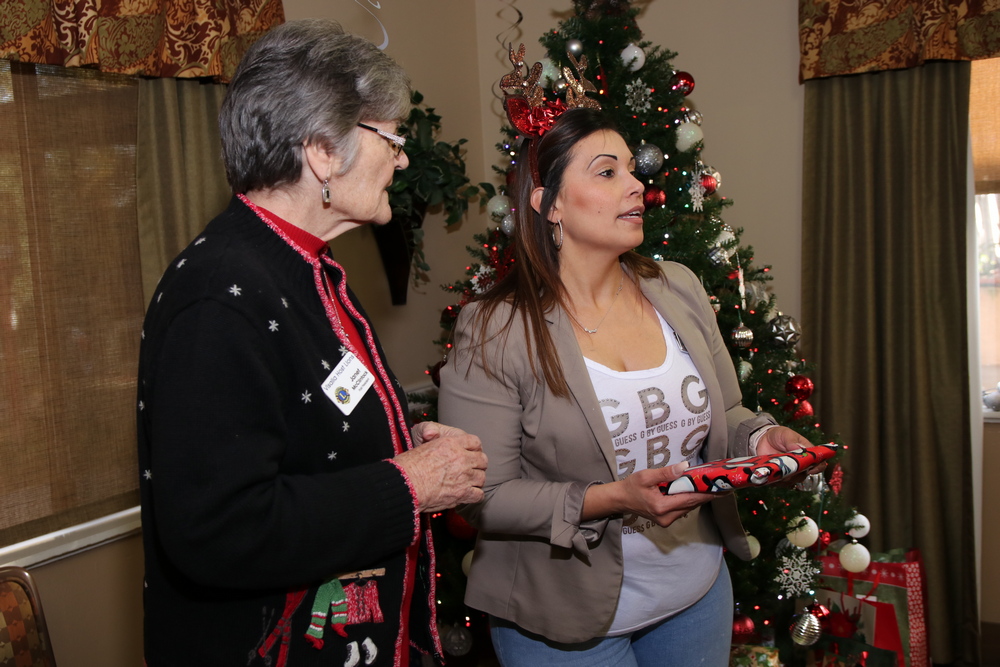 Activities director at Redwood Springs, Jackie hand Lion Janet a present to deliver to one of the residents. 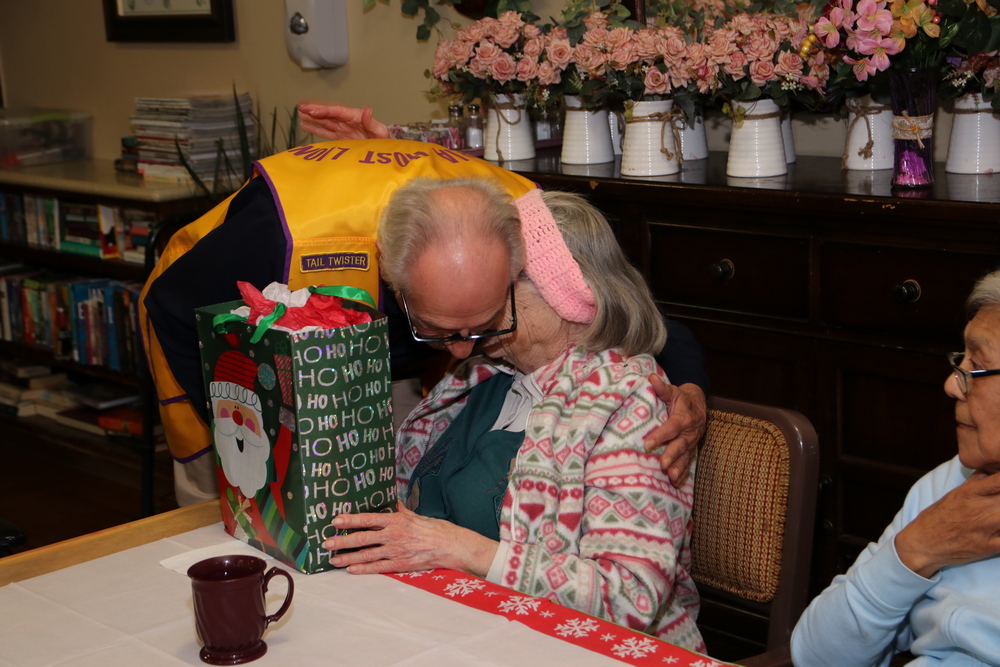 Lion Allen gives one of the Redwood Springs residents a hug as he delivers her gift to her. 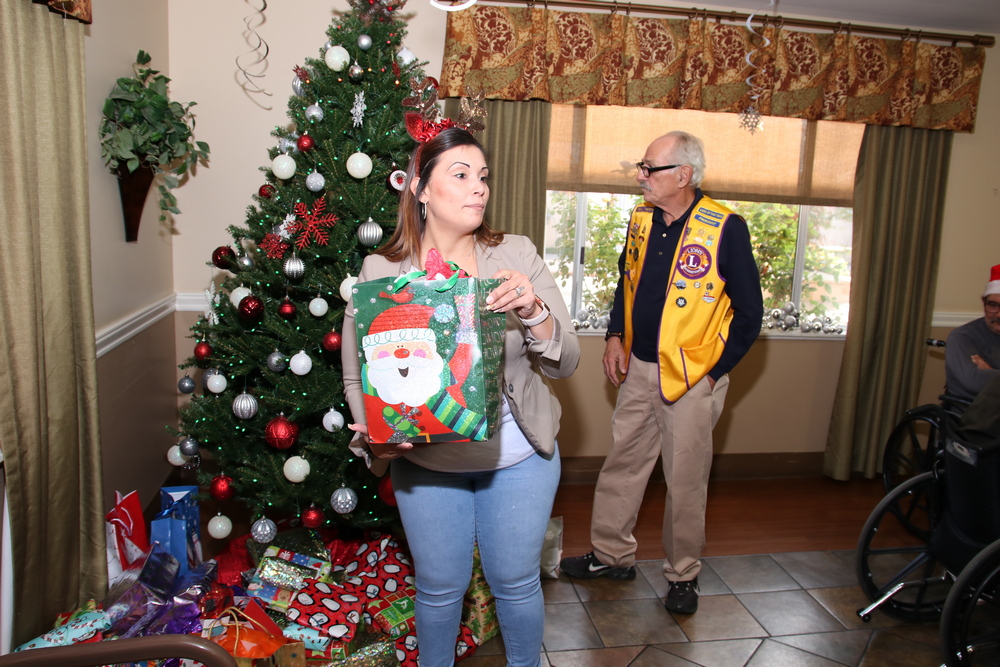 Redwood Springs activity director Jackie get ready to point out one of the residents to Lion Allen so he can take a gift to them.