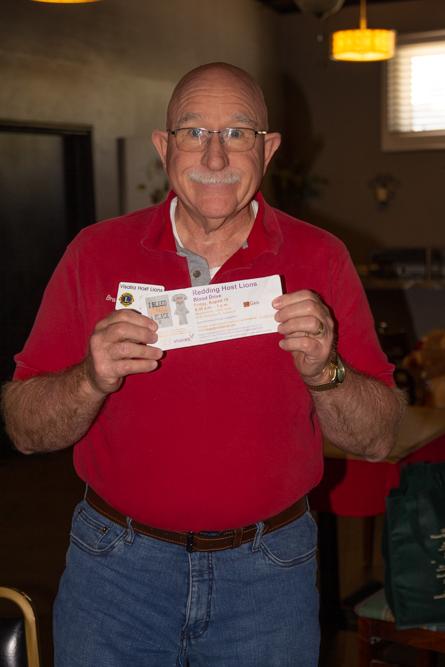 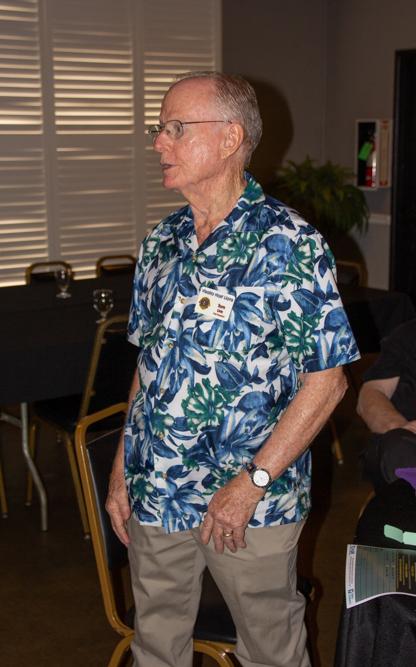 Lion Tom announces the Huston School donation our club makes has been going to help attendance.

Lion president tony led the meeting today and called on Lion Pat to lead us in saluting the flag, Lion Dee to lead us in singing God Bless America and, and Lion Aaron to do the invocation.

No fine badge: Went to your Roar editor Roy. ( and I know that saved me a few dollars)

Lion Betty was the secret greater and she was able to avoid several people and earn the club some much-needed cash.

There will be no meeting next Friday.

Mark your calendars for September 15th, the day of the Threes Rivers Lions Club 75th-anniversary celebration at the Three Rivers Lions Arena. Reservations must be received no later than September 1st. Call their secretary Mary Andrade at 559-561-4692 and leave a message regarding attendance.

Lion Cheri from the Pride Lions shared a fundraising opportunity with all the clubs in the area. Fresno State needs help with its concession sales on the following dates (Football games) Sept 1 and 10th, Oct. 15th and 29th, and Nov. 25th. Contact Lion Tony if you would like to help. Funds will go to clubs based on attendance.

Lion Miriam announced that the TC Association of Realtors is hosting a Los Vegas Night. Even though she did say there would be Russian Roulette, we persuaded her that we were fairly certain this was not a game that would be played at that event.  Check out the flyer for this event.

We had two guests today, Dr. Shravan Gunde and Dr. Sireesha Palkamsetti, who are considering joining the club.

Although not an auction item, Lion Roy had been on an auto trip from San Francisco to Ferndale and did not bring back anything to auction off, so he gave $10.

Lion Miriam had a happy $5 because her grandmother had undergone two surgeries in the last few weeks and is doing well.

Lion Aaron was happy for our two guests today.

Lion Pete was happy he will be on his annual backpacking trip next week and will not be at our meeting.

Lion Tom was happy that within the hour, he would be off to Moro Bay, where the temps were in the 60s.

Lion Pat was happy his neighbor had told him about a broken sprinkler head in his backyard because he never looked out the window at that part of his yard.

Lion Craig was happy that he would be up at Shaver Lake soon and gave part of two weeks ago’s marble winnings for a total of $10 happy bucks.

Lion Roy was happy about the car trip he and his wife had recently returned from up the coast, happy that the Dodgers were in the first place by a few games, and happy that he had photographed the Kaweah Golf Tournament two weeks ago.

Lion Aaron fined both Lions Tom and Bob Line for having their own conversations while our two guests were introducing themselves.

Lion Tom fined Lion Bob Line for not showing up at the recent Rawhide game even though he had told Tom he would be there. Bob’s excuse, it was just too hot.

Lion Roy fined Lion Karen for sending him the notes from last week’s meeting yesterday, six days after the meeting, and too late to do the newsletter. This was the second time Karen paid two dollars.

Lion Dee fined Lion Bob Bricker for his phone going off earlier in the meeting; Dee said it woke him up.

Lion Pat fined Lion Dee for being so comfortable after his back surgery that he could just fall asleep during our meeting.

Lion Brad drew for the coveted white marble but came up with another color that did not net him anything.

Nick Perry from Valley Life Charter School was our guest today. His talk was about the music program at the school and the need for Guitars for the Students, by the end of his talk he had pledges for at least six guitars. 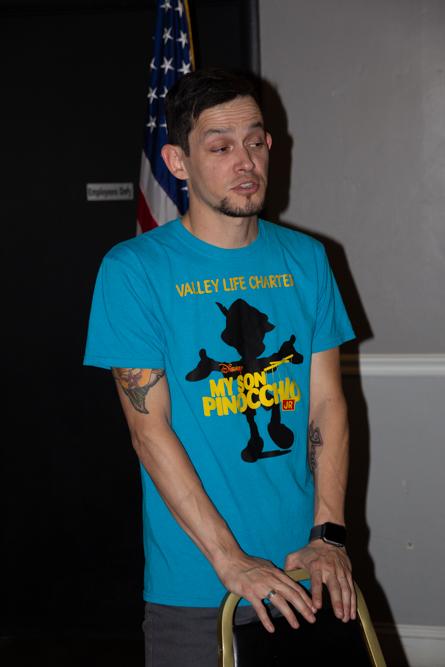 Lion Pete won the Free Add today and wanted to get the ball rolling for football season.