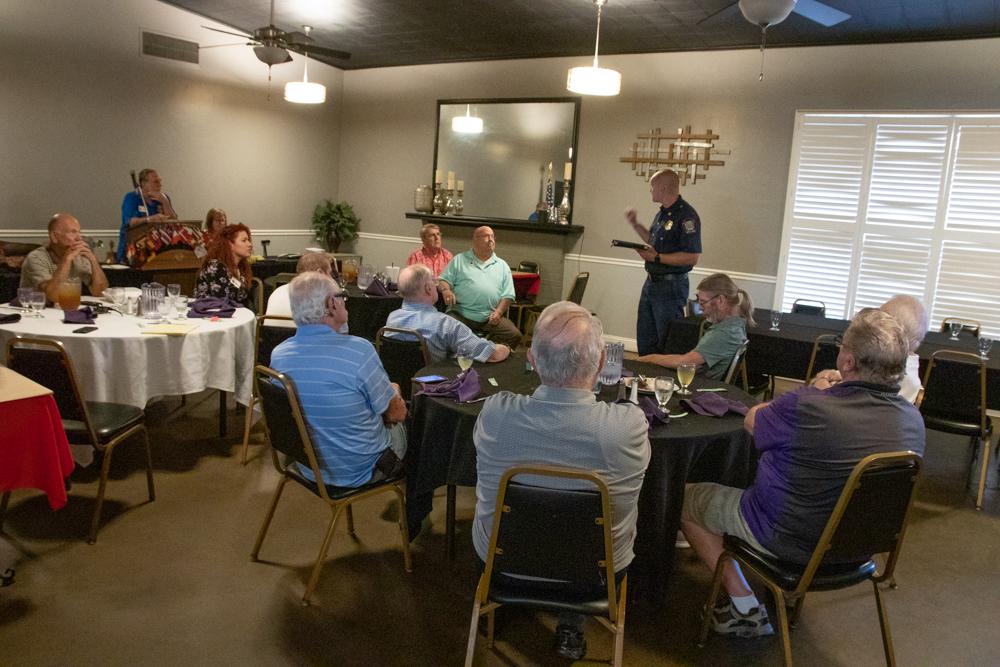 Visalia Fire chief Dan Griswold gives our club insight into the goings on at the fire dept.

El Presidente Lion Tony led the meeting today and asked Lion Miriam to lead us in saluting the flag, Lion Pat to lead us in singing My Country Tis of Thee, and Lion Aaron to do the invocation.

Next week will be our Monthy evening meeting at Quail Park Shannon Ranch. If you have not received the email from Lion Lauri, please contact her and let her know if you will be attending that meeting. Quail Park needs to know how much food to repair. Dinner is $20.

Lion Brent had gone to Las Vegas but did not bring back anything to auction off (he said it was all business), so he donated $10.

Lion Pat was happy that his nephew had gone to State Line Nevada and won some cash more than once, $1,200 on one occasion, $800 another time.

Lion Bob Line was happy that he was celebrating his birthday this week.

Lion Dee was happy his granddaughter would be in the Little Thearders production of  The Trial of the Big Bad Wolf at the Rawhide Stadium this October 13-15.

Lion Aaron was happy Fire Chief Dan Griswold was with us today and he had a happy buck for being able to watch Rober Federer’s last tennis match. Seeing the three best tennis players (Federer, Djokovic, and Nadal) at one time was a joy.

Lion Karen had ten happy bucks, five for her new granddaughter, and 5 for the fact that she will be going on holiday to Greece.

Lion Brent, our program chairman, was $5 happy, partly because chief Griswold could make it on short notice for our program today, and his daughter was getting back into Gymnastics.

Lion Craig had a happy $140. He found out that he had paid his dues twice, so he proceeded to give us a long story (for that extra $140 that he donated to the club)  about going through some old mementos and finding his Middle School report card, which was not such a good one as we found out. He also found out from his 90-year-old Cusson that a wedding dress that had been handed down through the family was made from a parashot that his dad had brought back with him from WWII. Lion Pat followed that up with a comment about the bride trying to bail out.

Lion Dee fined the Dodger fans for not being happy about winning the west.

Lion Pat fined Lion Tom Link because he closed his clothing store (ten years or more ago), and he has no place to buy good clothing.

$5  Lion Craig, who donated it to the Lions Eye foundation.

Lion Dee won the marble drawing but not the white marble. 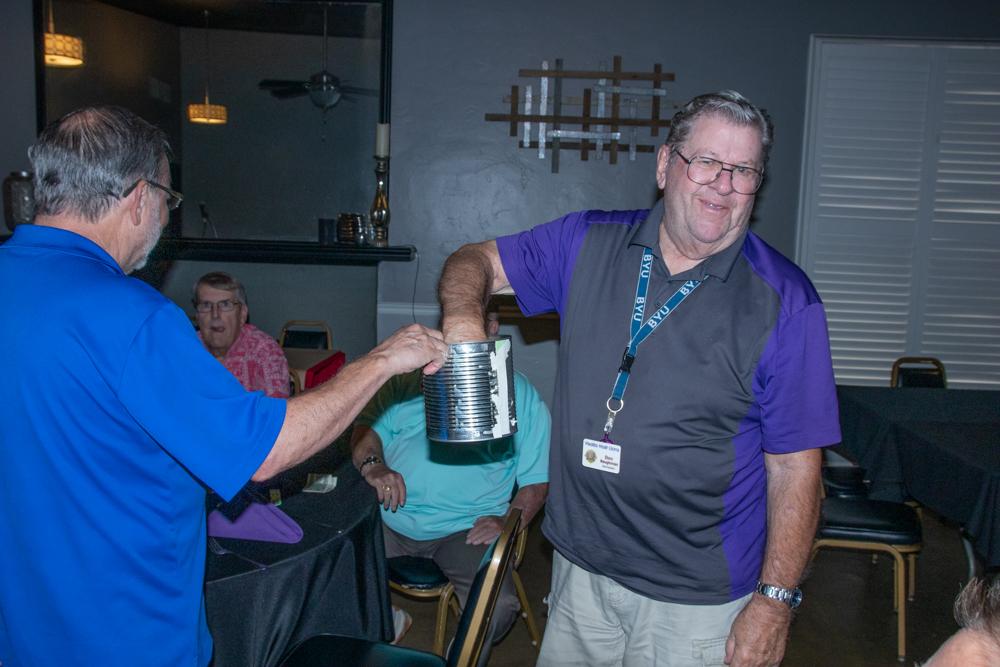 Lion Dee drawing for the white marble and coming up short. 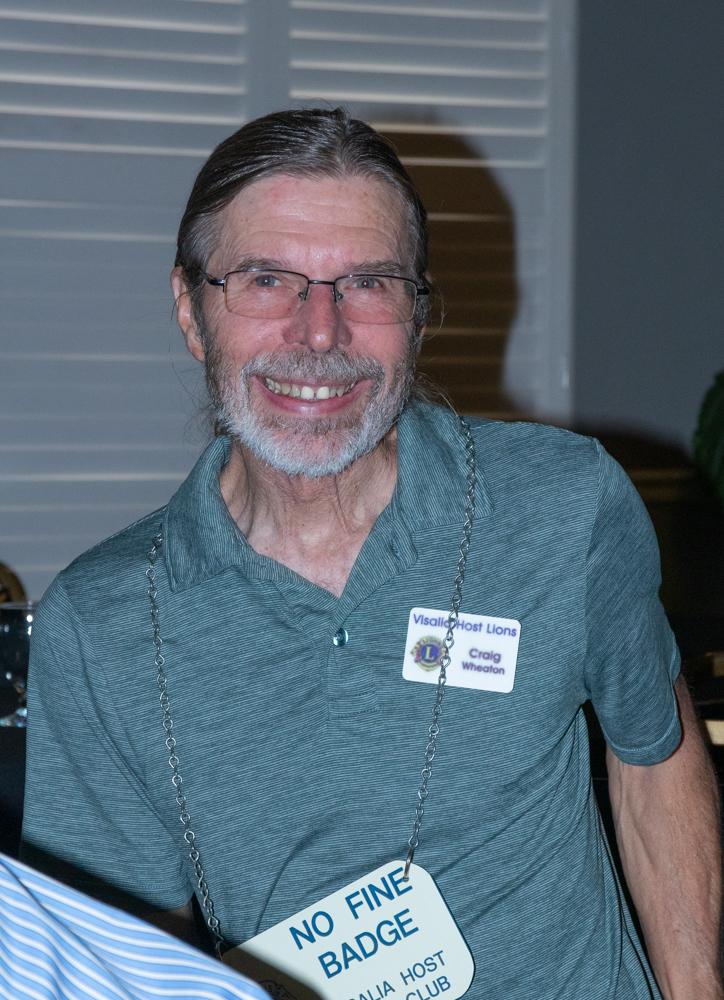 Lion Craig got the no fine badge today.

Visalia fire chief Dan Griswold was with us again today and a big thanks for him stepping in at the last moment. We had no program for today’s meeting, and Dan gracelessly agreed to talk just a couple of days ago; even though he had been here just a few weeks ago we had a lot of questions for him about the downtown fire, response times, and how the paramedics with the fire dept and the ambiances services in the city work together. 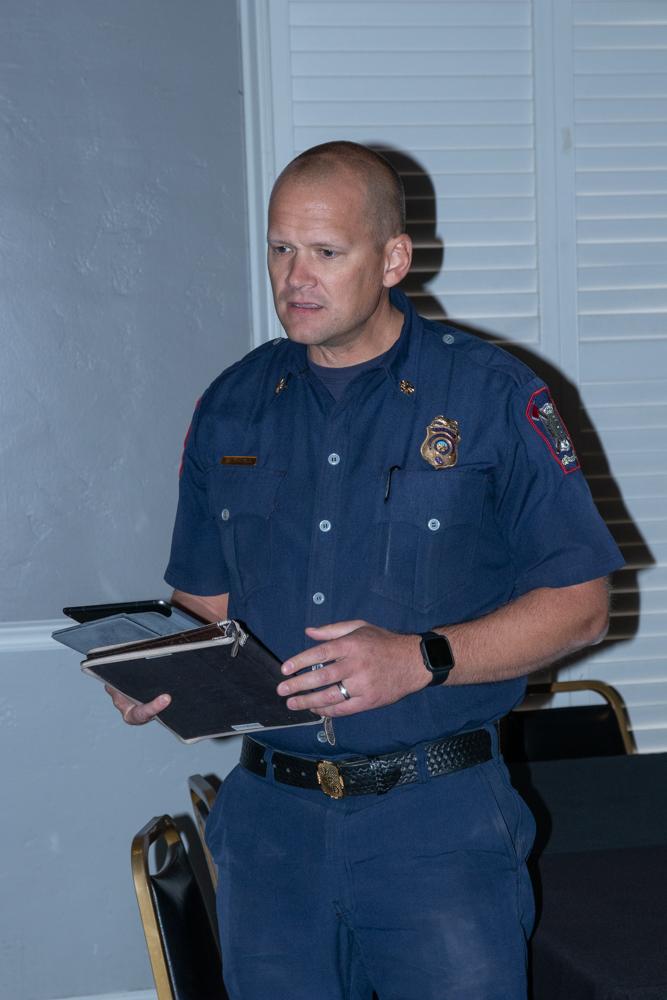 Lion Craig won the free ad and went with the Giants.